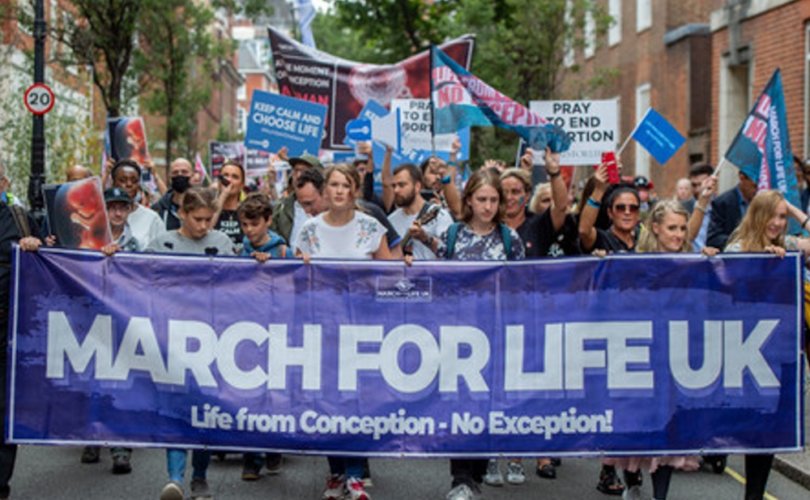 LONDON, United Kingdom (LifeSiteNews) – The annual March for Life UK took place on Saturday, gathering around 4,000 pro-life activists who marched through the streets of London in defense of the unborn. Their main slogan: “Life from conception! No exception!”

The day began with a pro-life gathering which started at 10:30 AM at the Emmanuel Center, a convention venue located half a mile away from Westminster. The march itself started at 1.30 PM. London police escorted the marchers on their journey through central London. They proceeded alongside Parliament and all the way to Trafalgar Square before heading back towards Westminster where they gathered in front of a stage on Parliament Square Garden. Keynote speeches and testimonies were given there, and the day ended in prayer with a blessing from Bishop Paul Swarbrick of the Diocese of Lancaster.

Among the thousands of pro-life activists attending the rally was British politician and leader of the Heritage Party David Kurten.

Kurten has been one of the few political voices in the UK actively speaking out in defense of the unborn.

Kurten then detailed the extent of the issue of abortion in the UK.

“One in four pregnancies in the UK ends in abortion,” he said. “I don’t think that people realize how much this happens, how serious this is: over 200,000 unborn children get killed in the womb every year, this a horror…ten million unborn children [have been aborted] since the abortion act has been brought in.”

The 50-year-old British politician then stressed the importance of getting involved in pro-life activism and raising awareness on the issue.

“We want to raise awareness of this fact and then say it has to stop,” he stated, and called for more people to get involved and participate in pro-life events such as the March for Life.

“Please get involved actively in the pro-life movement; raise your voices and make them heard,” Kurten urged. “People are starting to do that here today and it’s wonderful. We’re going to bring this as an issue to the country.”

Haynes then asked Kurten to comment on the spike in do-it-yourself (DIY) home abortions during the COVID crisis and on the significance of marching in front of parliament to oppose them.

“It’s always significant to walk past parliament because this is where the MPs that are elected to make decisions on behalf of our country make those decisions,” said Kurten. “Over the last 18 months we’ve seen Matt Hancock bring in this DIY abortion which no one would have considered beforehand, which is absolutely appalling.”

Kurten told Haynes he was shocked by the testimonies he heard from women who had experienced this abortion procedure.

“The stories I’ve heard from people who have had [DIY abortions] over the last eighteen months have been terrible,” he said. “It just adds another extra layer on top of the horror of abortion that has been going on over the last 50 years in this country.”

The leader of the pro-life British party concluded his statement on a hopeful note, saying he believes that the Abortion Act would one day be revoked in the UK.

“As we’re marching outside here, this is significant because I do believe one day, we’re going to have people in parliament who are going to turn this back,” he said, calling political movements such as his Heritage Party key.

“This is why I’ve started the Heritage Party, which is specifically pro-life, among other principles that we have,” he explained. “We want to grow, we want to get members, we want to get candidates, we want to get into Parliament so that we can reverse the abortion act and all of these things going on in this country.”

In addition to thousands of laypeople, a significant number of Catholic clergymen and religious turned up as well, including several priests. Bishop Swarbrick was also present, and kindly agreed to give Haynes a message of encouragement to all Catholics gathered for the protection of the unborn.

“Thank you, Michael, for [giving me] this opportunity to send a message to anyone who is listening, and to those taking part in this rally in support of Life in London,” he said. “It’s my first time doing this. Obviously, it is crucially important that we respect the sanctity of all life as a gift from God, and [understand that] we’re not free to do with it what we wish.”

“The unborn are particularly vulnerable and at risk. 200,000 lives [are lost to abortion] every year” Swarbrick continued, pointing out the irony of the British government insisting on the need to protect lives with COVID measures whilst allowing abortion: “The government [is] telling us to save lives, but it appears that it’s only a matter of saving some lives. So, that needs a bit of clarification and work.”

The bishop of Lancaster ended his statement by encouraging people to raise their voice in defense of the unborn regardless of their background or faith: “I encourage everyone to get behind the work of the Life movement, whether they are people of Faith or not, that is not something that needs to keep people out. But if we can work together…those children in the womb need all the friends they can get. So, whoever you are and wherever you are listening to this, may God bless you and help you to become a friend of the unborn.”

Bishop Swarbrick later gave a speech before blessing the crowd gathered in front of Parliament at the end of the rally.

Pro-abortion protesters were also present along the way, and later gathered in a small group of some thirty men and women, standing just a few yards away from the thousands of pro-life marchers gathered on Parliament Square Garden. Their slogan: “Pro-life? that’s a lie! You don’t care if women die!”

One of them, Laurie Penny, who insisted on being referred to as “they” rather than “she,” described a crisis pregnancy carried to term as “a moral outrage.”

“They” told Brephos reporter Dave Brennan that “they” were “here to prevent a moral outrage. I’m here because I believe that forcing any ‘pregnant person’ to carry to term and to give birth against their will is a moral outrage.”

Brennan later commented: “It’s been interesting listening in to some of the rhetoric, whereby a pregnancy being carried through to term, and so, not being allowed to have that baby violently killed, that was described as a moral outrage.”

In spite of pro-abortion activists being present and voicing their opinion throughout the event, there were no altercations, and the London police ensured that the march and rally were able to carry on without incident.

The voices of the pro-abortion protesters were soon covered by the moving testimony of a young woman, Natalia, who described the harrowing experience she had when losing her unborn child to a DIY home abortion:

“What I saw wasn’t a heavy period and it wasn’t a clump of cells…it was a baby…it was my son” she told the crowd, fighting back tears of grief. “My son died that day, and so did a part of me.”

After describing the physical and emotional violence of the bloody procedure which left her traumatized, she asked: “Can we agree that women deserve better than this?”

The young woman also expressed her anger at the fact that so many women are being pressured or even coerced into having abortions, and denounced the lies that led her down that path: “there were so many lies I was told,” she said before listing the many dangers hidden within the apparent safety of the home abortion pill, which is presented as “the safest method of abortion” and as “essential healthcare” by the abortion industry.

She ended her speech with a message of encouragement for isolated women who have experienced abortions and encouraged them to reach out to the many pro-life organizations that help women in need, such as Rachel’s Vineyard.

March for Life UK organizer Isabel Vaughan-Spruce appeared next on stage. She called for a zero-tolerance policy on abortion, declaring that “when something so objectively wrong as facilitating a mother in the killing of her own child is enshrined in law, we have a duty not to tolerate this.”

Vaughan-Spruce then asked, “what sort of a nation are we, that when a woman or a couple, present themselves in a crisis pregnancy situation, the solution which we offer is to kill their child, telling them that this will solve their problem?”

The rally ended with a blessing given by Bishop Swarbrick, concluding the 2021 annual UK March for Life.