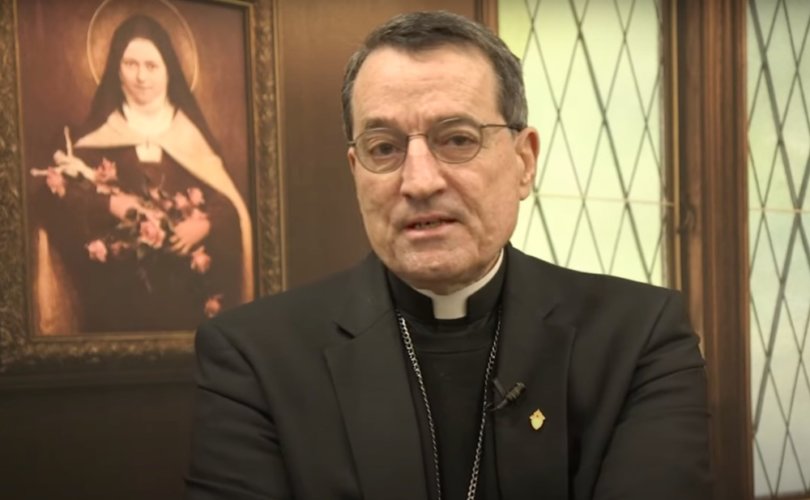 FRESNO, California (LifeSiteNews) — The bishop of Fresno, California has come out in strong support of San Francisco Archbishop Salvatore Cordileone’s May decision to bar pro-abortion Democrat House Speaker Nancy Pelosi of California from presenting herself for Holy Communion.

In a June 6 open letter addressed to priests, deacons, seminarians, and the Catholic faithful, Bishop Joseph V. Brennan wrote that he had “been wanting to write in support of Archbishop Cordileone for several weeks now.”

“He has taken a lot of heat, in and out of the Church for standing up for what’s right,” the bishop said in the letter.

Last month, Cordileone generated widespread controversy when he instructed Pelosi, an outspokenly pro-abortion Democrat and self-professed Catholic, not to present herself for Holy Communion until she repudiates her “advocacy for the legitimacy of abortion,” and confesses and receives absolution for “this grave sin in the sacrament of Penance.”

“He chose this course of action for her persistent stand in support of abortion and for her recent participation in an effort to codify into Federal law the right to take the life of an innocent, unborn child so as to enshrine that right in the law of the land,” Brennan explained in the letter. “The Archbishop has done his due diligence and has made consistent attempts for a number of years to communicate with the Speaker about authentic Church teaching in this regard.”

“In other words, like a good pastor, he is trying to lead her away from a very sinful situation. He is caring for her soul,” the bishop added.

The Catholic Church teaches that the Eucharist is the literal Body, Blood, Soul, and Divinity of Jesus Christ. According to Church teaching, no Catholic who is in a state of mortal sin may present himself for Holy Communion until he has confessed his sin and received absolution in the Sacrament of Confession.

“A Catholic legislator who supports procured abortion, after knowing the teaching of the Church, commits a manifestly grave sin which is a cause of most serious scandal to others. Therefore, universal Church law provides that such persons ‘are not to be admitted to Holy Communion’ (Code of Canon Law, can. 915),” Cordileone wrote.

According to Bishop Brennan, receiving Communion “while at the same time publicly ignoring and positively working against essential Church teaching and practice” and “promoting something that is intrinsically evil” amounts to “immense spiritual hubris and hypocrisy.”

While noting there is “more than enough hypocrisy to go around these days — in my own life too,” Brennan argued that Catholic politicians have used their reception of the Eucharist as a “virtue-signaling moment” to demonstrate their “Catholic credentials.”

“The problem with most abortion-promoting Catholic politicians is that they do not seem to be acknowledging the sin in any of this,” he said. “Even if they somehow acknowledge the sin in the depth of their soul and their conscience as they approach the Eucharist, something which only they and God can know, they cannot publicly persist in this sin.”

In the letter. Brennan also blasted an unnamed “entertainer” on the left-wing daytime talk show The View, who had asserted it was not Cordileone’s “job” to bar Pelosi from Communion over her abortion views.

Last month, Whoopi Goldberg drew significant backlash when she criticized Cordileone during a segment of The View, claiming, “This is not your job, dude! That is not up to you to make that decision.”

“It is his job to teach, to correct, to admonish, and, if necessary, to impose sanctions,” Brennan explained in his open letter. “It is his job (everyone’s job in fact) to point things out to and charitably correct anyone who is in a sinful situation. That is even more important to do when the person and the situation are so public, persistent, and brazen.”

In the conclusion of his letter, Brennan reaffirmed his support for Cordileone’s decision, noting it was a “personally challenging” decision that “encourages all of us to engage in the same kind of dialogue with Catholic politicians in our own jurisdictions about these very same issues.”

A week after Cordileone issued the formal admonition to Pelosi, Bishop Michael Burbidge announced that the Diocese of Arlington, Virginia, will also respect the ban on Holy Communion for Pelosi.

Bishop Joseph Strickland of Tyler, Texas has similarly moved to ban Pelosi from receiving the Eucharist in his diocese.

“The concern for Mrs. Pelosi’s eternal salvation extends to the Diocese of Tyler,” Strickland tweeted. “She is barred from Communion here until she repents & stops advocating the murder of children. Pray for her heart to be turned to God & away from the power of this world.”