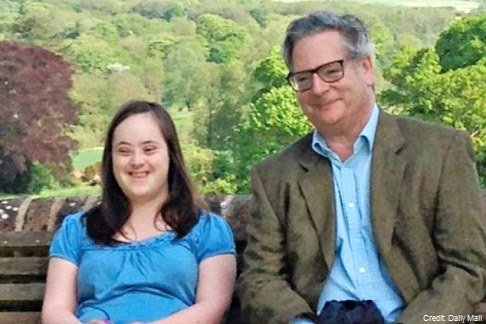 Dominic Lawson with his daughter Domenica

May 12, 2016 (SPUC) — In recent months, there has been considerable backlash against a proposed new test to detect Down's syndrome in children before birth.

This negative reaction is based primarily on the evidence that this new Non-Invasive Pre-natal Test (NIPT) will in all likelihood lead to more abortions of unborn babies with Down’s syndrome. The Don’t Screen Us Out campaign believe it would result in 92 more abortions per year.

Last week SPUC reported that Sally Phillips, star of the Bridget Jones Diaries films and the hit TV show Miranda, had expressed her grave concerns about the proposed new test. Mrs Phillips, whose eldest child has Down’s syndrome, suggested that pre-natal testing for disabilities should be abolished altogether, as it goes against the principles of an inclusive society.

Now another high-profile parent has spoken out against the new test.

Dominic Lawson, a journalist for the Daily Mail, has used his column to liken the new test for Down's syndrome to “State-sponsored eugenics”. The columnist, who is the son of former chancellor Nigel Lawson and the brother of Nigella Lawson, the celebrity TV chef, has a daughter with Down’s syndrome.

He writes that: “The Department of Health is about to approve a scheme designed to bring about a world in which people like my youngest daughter will cease to exist.”

Mr Lawson goes on to explain that discriminatory attitudes towards people with Down’s syndrome are nothing new:

“I first got a sense of [these attitudes] after my daughter, Domenica, was born, almost 21 years ago on June 1, 1995 and I made public the fact that she had Down's syndrome.

“The immensely popular ex-NHS nurse and agony aunt Claire Rayner wrote an article criticising us for not undergoing pre-natal screening. She declared 'the Lawsons will not be paying the full price of their choice', and that society would have to bear the burden of the 'misery' of our daughter's life.”

“But this was, I'm afraid, exactly the sort of argument used by the German academic Karl Binding, whose book Permitting The Destruction Of Life Unworthy Of Life was hugely influential in preparing the ground for the Nazis' later programme of compulsory euthanasia of the mentally disabled.

“Of course, the NHS is not proposing to terminate the disabled unborn without the full consent of the parents. But there is an insidious pressure to 'do the responsible thing'.”

Mr Lawson also highlights that these concerns are shared by many parents, as was shown when the BBC ran a selection of comments on ante-natal screening from the public. Among the many that stand out is one from Heather in Livingstone:

“I was told that my daughter had Down's when I was about 12 weeks pregnant and every doctor and gynaecologist I saw tried to convince me that termination was the best option. I was still offered this at 26 weeks!

“One reason given to me by a cold-hearted consultant was that 'these babies put a strain on the NHS'.”

As Mr Lawson points out, the National Screening Committee (which has approved the new test) does not exactly represent the views of people with Down’s syndrome, or their parents. No one on the committee has a child with Down's syndrome, nor was there any representative of parents who do.

Perhaps this is why the committee seems to have such a negative view of Down’s syndrome, as they are entirely unaware of the reality of living with a child with the condition.

Presumably they are also unaware of a paper published in the American Journal of Medicine in 2011, entitled Self-perceptions from people with Down's syndrome.

Based on a survey of almost 300 with the condition, aged 12 and over, its authors concluded that “nearly 99 per cent of people with DS indicated that they were happy with their lives, 97 per cent liked who they were and 96 per cent liked how they look.”

And indeed Mr Lawson can attest to the fact that his daughter is one of the happiest people he knows:

“It used to annoy me, when I told people I had a child with Down's, that I would get the response: 'Oh, they are so happy, aren't they?', as if remarking on a particular breed of dog.

“But this is one generalisation which has some validity. Of course, Domenica has her moods, as we all do. But I am constantly energised by her own sheer enthusiasm for life, not to mention her unfailing ability to see the comic side of almost everything.”

“Would the world be a better place without people with Down's syndrome? Without people such as my daughter? What crimes have any of them committed for this question even to be asked, let alone agreed to, by the Government?”