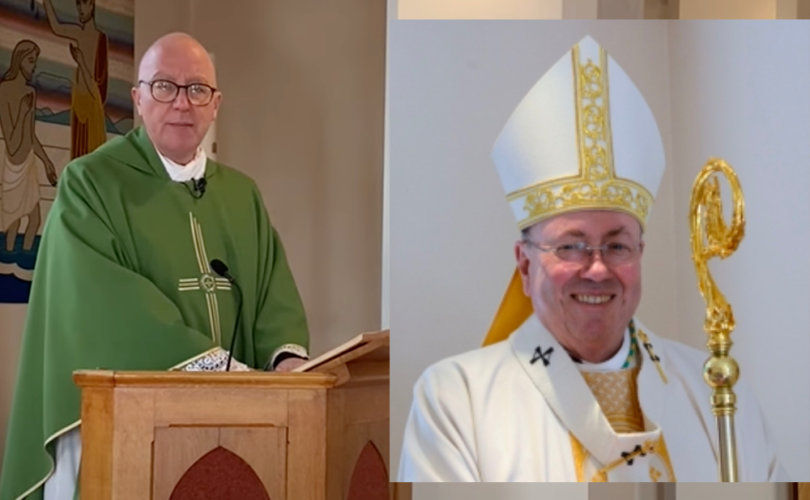 WIDNES, U.K. (LifeSiteNews) — A Catholic parish in north-west England is set to hold a Mass for the “LGBTQ+ community” April 3, as the local bishop, Archbishop Malcolm McMahon, told LifeSiteNews he has “no intention” of canceling the Mass.

Fr. Mark Moran, the parish priest of St. Wilfrid’s parish in Widnes, announced in the parish newsletter March 27 that the church would be holding a Mass specifically for the “LGBTQ+ community.” Fr. Moran also asked for members of the parish to help with refreshments before and after the Mass:

On Sunday 3rd April at 2pm at St. Bede’s Church there will be Holy Mass celebrated with the LGBTQ+ community in the Archdiocese. Everyone will be made very welcome. CAN YOU HELP? I need two volunteers to help with making tea and coffee after Mass in the Guild Hall, if you are free on 3rd April, from 1.30pm – 4pm then please contact the parish office and leave your name and number and Fr. Mark will be in contact with you. Thank you!

Fr. Moran repeated the notice in the current newsletter for this weekend, again inviting “all” in the parish to attend.

There was no mention of what was understood by the phrase “LBGTQ+ community,” nor whether the Mass would be an encouragement of the LGBT lifestyle or rather a promotion of Catholic teaching on sexuality.

In addition to the four priests currently resident in St. Wilfrid’s parish, Bishop John Rawsthorne, the retired bishop of the Diocese of Hallam, is also living there.

The parish is part of the Catholic Archdiocese of Liverpool, led by Archbishop Malcolm McMahon, who was appointed to the archdiocese in 2014 by Pope Francis. The archbishop is Vice President of the Catholic Bishops’ Conference of England and Wales (CBCEW).

Archdiocese of Liverpool has ‘no intention’ of canceling Mass

LifeSiteNews contacted both St. Wilfrid’s parish and Archbishop McMahon, asking if the Mass would be an endorsement of LGBT ideology, or, in contrast, a promotion of Catholic teaching on sexuality, chastity, conversion of heart, and the defense of marriage between man and woman.

LifeSiteNews further asked the archbishop how the Mass aligned with Pope Francis’ condemnation of gender ideology, and whether the archbishop would prevent the Mass from taking place in order to prevent scandal. LifeSiteNews highlighted previous guidance on how such Masses should promote “chastity” and “an ongoing conversion of life.”

In response, Fr. Moran noted how his parish had “simply been asked to host the Mass this time.” He noted that in his understanding, it “is simply offered to those who desire to follow Christ more closely within the Church and receive encouragement from others who are trying to do the same.”

Fr. Moran directed LifeSiteNews to Fr. Stephen Maloney for further information. He had formerly served as the archdiocesan vocations director, who “with the blessing of the Archbishop has been asked to support this part of our church community.”

I note the comments you make, but I have no intention of asking Fr. Mark Moran to cancel this Mass. I would direct you to Pope Francis’ comment that “the LGBTQ+ community are at the heart of the church.”

LifeSiteNews has been informed of a number of concerned Catholics who have contacted Archbishop McMahon, asking him to cancel the Mass.

An archived 2012 press release from then Archbishop Vincent Nichols of Westminster, in relation to the notorious Soho “gay” Masses held under his watch, stated that the LGBT Masses in Westminster must affirm “the dignity of all persons created by God, the moral principles concerning chastity and the Church’s teaching on sexual activity, and the pastoral care of Catholics who are of same-sex orientation.”

The release also noted how “all who participate in the Mass are called to live the church’s teaching through an ongoing conversion of life.”

In 2013, Nichols obeyed a Vatican directive and rescinded permission for homosexual activists to hold the notorious Soho Masses, where the homosexual lifestyle had been promoted as morally acceptable for Catholics. Later made cardinal in 2014 by Pope Francis, Nichols then simply moved the locations to a different London church, where he attended the opening Mass.

Nichols, the president of the CBCEW, has maintained his long history of welcoming, and celebrating Masses for LGBT groups since.

Under the leadership of Cardinal Ratzinger in 1986, the Congregation for the Doctrine of the Faith (CDF) issued a document instructing bishops on the pastoral care of homosexual persons. The CDF admonished bishops to ensure they, and any “pastoral programme” in the diocese are “clearly stating that homosexual activity is immoral.”

Meanwhile the Catechism of the Catholic Church teaches that “homosexual acts are intrinsically disordered” and “contrary to the natural law.” The catechism is very clear that homosexual activity can never be approved, and repeats that “[h]omosexual persons are called to chastity.”

“By the virtues of self-mastery that teach them inner freedom, at times by the support of disinterested friendship, by prayer and sacramental grace, they can and should gradually and resolutely approach Christian perfection,” reads the Catechism.

The CDF further noted that while a homosexual inclination is not a sin in itself, it is nevertheless “a more or less strong tendency ordered toward an intrinsic moral evil; and thus the inclination itself must be seen as an objective disorder.”

For respectful communication regarding the LGBT Mass