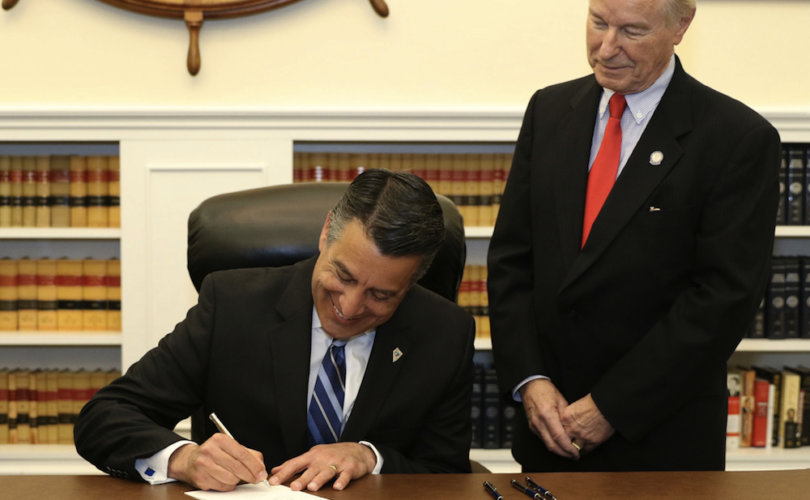 May 19, 2017 (LifeSiteNews) — Nevada became the ninth state to ban pro-heterosexual therapy for minors when Gov. Brian Sandoval signed the pro-LGBTQ bill into law on Wednesday.

Connecticut’s Democratic governor, Dannel Malloy, rushed to sign a similar bill into law on May 10 after the state senate passed the bill 36-0 with no Republicans voting against it.

The support of GOP governors for such pro-LGBTQ legislation goes directly against the Republican Party platform, approved last summer at the RNC Convention, which affirms the “the right of parents to determine the proper medical treatment and therapy for their minor children” (page 37).

Brian Camenker, founder and president of the Boston-based pro-family group Mass Resistance, said GOP politicians’ growing embrace of the homosexual-transgender lobby’s agenda will devastate the Party if it continues.

Former homosexual and professor Robert Oscar Lopez, director of Texas Mass Resistance, said the “signs are too obvious” that the pro-LGBT movement is steadily moving into “the control of other people’s lives,” which ultimately ends in “dictatorship.”

He told LifeSiteNews that Republicans are “afraid of using that term and they just have to get over it.” Lopez questioned why a party that purports to defend “liberty” would accede to escalating state power in the name of LGBT “rights” when it is now clear that “gay and trans rights” come at the expense of others’ freedoms.

Social conservatives and LGBT advocates alike are waiting to see whether and to what extent President Trump allows the federal government to celebrate “gay pride month” in June, as President Obama did with much fanfare for eight consecutive years. George W. Bush ended the practice in 2001 after Bill Clinton started it.

The Nevada bill enacted by Gov. Sandoval affects therapies for children under 18 and defines “conversion therapies” as “any practices or treatments that seek to change the sexual orientation or gender identity of the children.”

However, Cristopher Doyle, who practices pro-heterosexual “reparative therapy” for those who want it, argues that “conversion therapy” is the loaded term of choice used by LGBT activists and their allies to advance their cause and demonize people like himself. Doyle said the term denigrates genuine, pro-heterosexual talk therapy approaches, which are completely non-coercive and have helped many people manage or overcome unwanted same-sex attractions.

Doyle, who left homosexuality behind and is now in a natural marriage with children, is a licensed clinical professional counselor in Virginia and co-coordinator of the National Task Force for Therapy Equality.

“While the vast majority of states continue to vote these bills down, unfortunately, the children in Nevada are the latest victims of political correctness gone wild at the hands of liberal politicians and gay activists,” he told LifeSiteNews.

SB 201 was sponsored by openly homosexual State Sen. David Parks, D-Las Vegas, who called the new law — despite its hostility toward the “ex-gay” movement — “a major step forward in building a more equal and inclusive state.”

“Nevada has a long record of passing progressive legislation to protect the LGBTQ community with bipartisan support, and I want to thank Governor Sandoval for signing this critical legislation to protect LGBTQ youth,” Sen. Parks said in a statement, reported by the Reno Gazette-Journal. “Banning conversion therapy makes Nevada a safer place for children who are at a higher risk of anxiety, depression, substance abuse, and even suicide.”

But Doyle, who also runs a group called Equality and Justice for All that defends “ex-gays,” said, “No child should be denied the right to get the therapy that fits their values, and no parent or family should be told they must accept that their child is gay or transgender if they believe their son or daughter has underlying trauma that may be causing these unwanted feelings.”

On May 2, Doyle’s pro-reparative therapy Task Force filed a formal complaint with the Federal Trade Commission against three pro-homosexual-“transgender” organizations, the Human Rights Campaign (HRC), the National Center for Lesbian Rights (NCLR), and the Southern Poverty Law Center (SPLC). The complaint charges that all three are using false information, misleading statements and gross distortions to advance “nearly two dozen bills in states across the country to take away the therapy rights of parents, and their teenagers, who voluntarily seek out professional therapy to help cope with sexual and gender identity conflicts.”

Lopez said the greatest danger of government reparative therapy bans is the effect they have in combination with escalating LGBTQ propaganda programs in schools, especially those aimed at the very young.

He said the barrage of pro-LGBT messages in school, combined with “gay-straight alliance” student clubs In schools, leads impressionable kids to begin questioning their sexuality or “gender” and then experiment with aberrant behaviors and self-identities.

Then, in states with reparative therapy bans, “Nobody can tell them that they could be happier the way they were born — heterosexual,” he said.