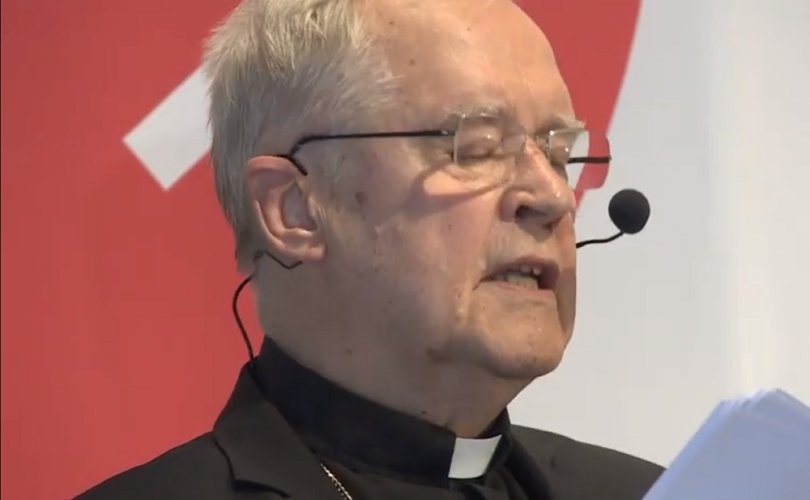 Reliable exegetes state, “Sickness is the wages of sin.” Among other biblical passages, Cordes pointed to the story of the paralytic in the Gospel of Mark, which “makes the link between illness and sin irrefutable.”

Without naming him, Cordes quoted archbishop Ludwig Schick of Bamberg, Germany, who claimed that it would be “cynical” to call the COVID-19 pandemic a chastisement. The cardinal said this statement is only true if it meant to indicate a direct connection between a person suffering and that person’s very own sins.

Cordes, again without naming any names, also criticized cardinal Angelo Scola, who until 2017 headed the Milan archdiocese. Scola had said, “The idea of divine punishment is not part of the Christian vision — even in such a dramatic situation as the one we are experiencing right now. Of course it is a complex issue, but God does not use punishment to convert us!”

The German cardinal commented, “Whoever distorts God’s love so completely condemns angrily the popular piety of centuries. He has God’s word against him, which says, ‘God is treating you as sons; for what son is there whom his father does not discipline?’ (Heb. 12:7)”

“And what is most deeply disturbing, such consolers do not only close church doors, but also heaven,” Cordes added. “But God is not apathetic.”

Recently, bishop Athanasius Schneider called the coronavirus pandemic “a divine intervention to chastise and purify the sinful world and also the Church.”

Unlike Cardinal Cordes, the auxiliary bishop of the Archdiocese of Mary Most Holy in Astana, Kazakhstan was explicit in describing the potential causes of the chastisement.

He quoted from the book of Revelation, the last book of the Bible. “I have a few things against you: you have some there who hold the teaching … that they might eat food sacrificed to idols and practice sexual immorality. Therefore repent. If not, I will come to you soon and war against them with the sword of my mouth.”

Receiving Holy Communion in the hand, a practice disobediently adopted locally and then permitted in a widespread way by Pope Paul VI roughly 50 years ago, “has led to an unintentional and intentional desecration [of] the Eucharistic Body of Christ on an unprecedented scale. For over fifty years, the Body of Christ had been (mostly unintentionally) trampled by the feet of clergy and laity in Catholic churches around the world. The stealing of sacred Hosts has also been increasing at an alarming rate.”

The current situation, where in many parts of the world no public Masses are said, and Holy Communion cannot be received by the faithful, “could be understood by the Pope and bishops as a divine rebuke for the past fifty years of Eucharistic desecrations and trivializations and, at the same time, as a merciful appeal for an authentic Eucharistic conversion of the entire Church.”

Other Catholic leaders — for instance, John Smeaton, chief executive of the Society for the Protection of Unborn Children — the first and largest pro-life organization in the United Kingdom, have offered similar assessments.

In his article for CNA Deutsch, Cordes also expressed his disappointment in the general Catholic response to the coronavirus pandemic.

“In the published statements of the German bishops prevail thankfulness towards doctors and helpers, encouragement to be available for service to others, and a strengthening in humanitarian discipline,” the cardinal explained.

“For example, it was bad news that the current situation no longer allowed public worship services. But solidarity and caution are called for. The risk of infection should be reduced, especially among the sick, the old and the weak. Catholics are called upon to show understanding. The church is part of society and must make its contribution,” Cordes recounted.

“These are the words of the instructions with which the ordained shepherds announce the cancellation of services,” he then added, no longer hiding his bewilderment.

Cordes pointed out that spiritual advice “can only be discovered with difficulty in the proclamations. Here and there comes the proposal to pray. The word ‘God’ is almost always avoided.”

The cardinal referred to the way the Church traditionally handled catastrophes like plague, for instance by passion plays or processions.

The experience “of powerlessness and hardship,” which many are experiencing today, drives people to God, Cordes is convinced. “Necessity teaches to pray.”