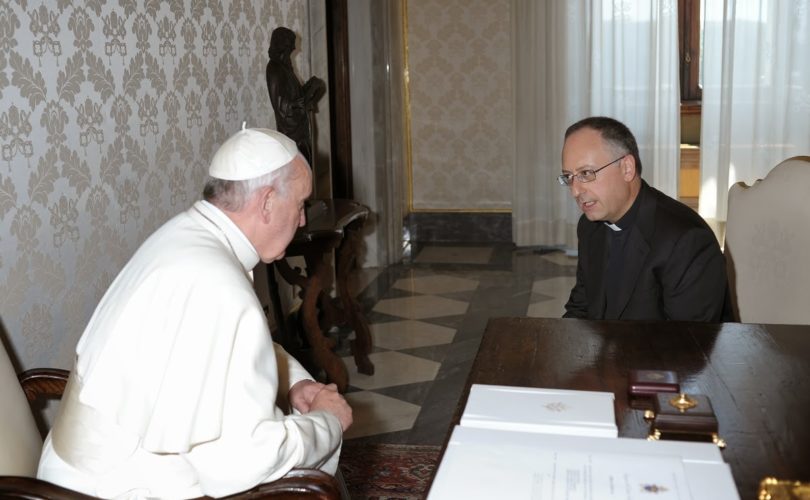 August 10, 2016 (LifeSiteNews) — Renowned Austrian Catholic philosopher Josef Seifert has called on Pope Francis to rescind those statements in the apostolic exhortation Amoris Laetitia that Seifert is convinced are “wrong and (in some cases) even objectively heretical.”

A close friend of St. Pope John Paul II and founding head of the International Academy of Philosophy, Seifert made his request in a German-language critique published August 3 on katholisches.info, which Dr. Maike Hickson has analyzed in The Wanderer.

Seifert, a father of six and longstanding member of the Pontifical Academy for Life, studied under Professor Robert Spaemann (who has also blasted Amoris Laetitia, and is close to Pope Emeritus Benedict XVI), as well as under famed phenomenologist and Catholic convert Dietrich von Hildebrand.

In the 28-page critique — which he stated is intended to supplant his earlier remarks, published without his authorization — the 71-year-old philosopher has also asked the Holy Father to reject clearly what Seifert calls a “false interpretation and a total inversion of the sense of AL,” according to Hickson’s translation.

This “radical misinterpretation” claims Francis’ apostolic exhortation, based on the deliberations of the Extraordinary Synod of the Family, allows for all couples in “irregular unions” — that is, non-celibate divorced and civilly remarried, cohabitating, and even same-sex couples — to be admitted to Holy Communion.

And while this interpretation of Amoris Laetitia is “the radical, contrary and absolute opposite of the traditional teaching,” it is being promoted by highly placed Catholics, Seifert noted.

“If instead none, now all adulterous, homosexual, lesbian, and living-in-promiscuity pairs are invited to the sacraments, there are truly no more limits – as Father Spadaro assures us,” Seifert wrote.

“Why not give the Sacraments to couples – nurses and physicians – who, through abortion or through their assistance in it, have been automatically excommunicated?”

Indeed, Schönborn, “whom the pope has declared to be the most competent interpreter of AL,” has made “the unbelievable statement that AL has completely eliminated the distinction between regular and ‘irregular’ couples,” Seifert pointed out.

As for Cupich, he “publicly gives out the Sacraments of the Holy Eucharist to politicians who have been automatically excommunicated due to their support of abortion,” and has called Amoris Laetitia a “rule-changer.”

Yet Pope Francis has not publicly contradicted these statements. “Many have to believe that this papal silence concerning this interpretation signals a papal consent,” observed Siefert, as does the pope’s appointment of Cupich to the Vatican’s Congregation for Bishops.

“A very clear and quick papal declaration that such an interpretation of the words of AL is a radical misinterpretation, is urgently necessary and highly urgent – if one wants to avoid the total chaos,” Seifert asserted.

Hickson writes that Seifert “explicitly rejects” the views of Cardinal Gerhard Müller, head of the Congregation for the Doctrine of the Faith, conservative U.S. Cardinal Raymond Burke, and Philadelphia’s Archbishop Charles Chaput when he contends that in Amoris Laetitia Pope Francis indeed proposes a change to sacramental discipline.

At the same time, the philosopher agrees with them that Amoris Laetitia “has not changed anything of the Church’s sacramental discipline,” because it cannot.

The Church’s sacramental discipline, which prohibits those in objectively sinful situations from receiving Communion “without prior conversion, confession and resolve to change their lives,” is based on “unchangeable truth rooted in Revelation,” and part of the “constant and unchanging doctrine of the Church” now established in the Code of Canon Law and the Catechism of the Catholic Church.

Still and all, Seifert believes “that some statements of AL are wrong and even (in some cases) objectively heretical and that they have to be rescinded by the Holy Father himself.” Generally, these statements are found in Chapter 8.

A few passages “give some of the most beautiful and merciful words of Jesus a completely different sense in detaching them from the strict admonitions of Jesus,” he stated.

Seifert pointed to Amoris Laetitia’s suggestion “that it would be advisable for a couple of divorced and ‘remarried’ partners to preserve sexual relations in order thus to avoid a possible infidelity on the part of one of the partners. Another example quoted is that AL indicates that a new relationship between divorced and ‘remarried’ partners might even be willed by God,” according to Hickson.

This claim, which Seifert bases on paragraph 303 of Amoris Laetitia, that “i.e., that an adultery might be God’s Will” is “clearly in contradiction with some Canones of the Council of Trent.”

“If the quoted words from AL mean – as many interpreters assume – that remarried and divorced couples can know that their deed is adultery and a grave sin and yet at the same time can live in the state of Grace – then this would contradict Holy Scripture and the dogmatic teaching of the Church,” he wrote.

He also objected to paragraph 297, which implies that all couples have to be “integrated” and that, as Francis writes: “No one may be condemned forever – that is not the logic of the Gospels!”

Seifert asserted it “is nearly unavoidable to understand this text in the sense that there is, according to him, neither hell nor the danger of eternal damnation.”

Moreover, in failing to warn of the dangers of making a sacrilegious Communion, that is, receiving the Eucharist in a state of mortal sin, Amoris Laetitia offers not mercy but cruelty, Siefert wrote.

When a change of the Church’s sacramental discipline now allows that couples – who are living objectively in such a grave sin that they would have been excommunicated until recently – may receive the Sacraments, then the total silence concerning the real danger to “eat and drink one’s own judgment by an unworthy reception of the Eucharist” is not understandable…

And when the words of Holy Scripture say that such a danger for souls exist – not to mention it with one syllable, or even to deny it straightforwardly, is to directly invite these couples which live in an objective contradiction to the Church to remain in that contradiction. And if one then additionally assures them that “nobody is condemned forever,” then this constitutes, in my eyes, not an act of mercy.

What else could it be but an act of cruelty?

Pope is no heretic even though AL crosses that line

Seifert contended that in Amoris Laetitia Pope Francis seems to teach that “the Divine Laws against adultery are mere ideals and aims which not everybody can fulfill.” This contradicts the Council of Trent, which “had taught dogmatically that each Christian, with the help of Grace and of the Sacraments, receives the strength to fulfill God’s Commandments.”

He added: “By the way, it is truly impossible that the pope can teach heresies that had been condemned by the Council of Trent. However, it is nearly impossible to interpret his words in a different way; that is why I think that it is absolutely necessary to revoke these sentences of AL.”

Seifert said he offered his critique humbly and loyally, and had no intention to “attack the pope, to damage him or to deny his lawfulness.”

The philosopher repudiates any suggestion that Francis is an “heretical” or illegitimate pope, noting that the Holy Father “has not consequently and continually, much less solemnly, presented these wrong (or even heretical) judgments.”

Laity have a duty to correct the pope

Seifert stated, “I am thus full of confidence that, as true pope and successor of Saint Peter, should Pope Francis find a contradiction between his statements and the teachings of the Church, he would immediately rescind his theses.”

The philosopher also emphasized that the laity have a “holy duty – out of love for God and neighbor and out of mercy for so many souls – to criticize our bishops and even our pope if we see them depart from the Truth or damaging the souls. This duty has been recognized by the Church since her early beginning.”

He urged Catholics to “plead with the Holy Father, in the name of God and of those souls deceived by such scandalous interpretations of AL, that he may very soon make such a clear statement.”

Such clarification is needed “in order avoid a spiritual catastrophe and sacrilege without limits in the Sanctuary of God and to undo a total confusion among priests and faithful alike.”