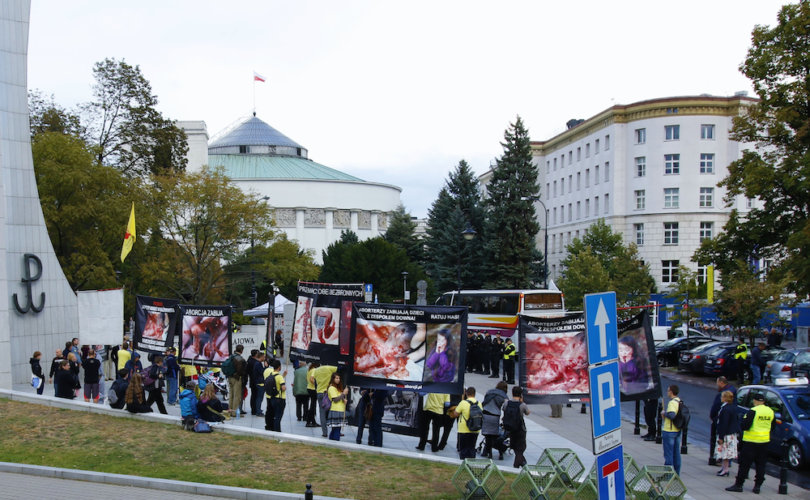 WARSAW, Poland, January 10, 2017 (LifeSiteNews) — Polish pro-lifers are trying again to force a vote in Parliament to establish an abortion ban, with legislators facing an initial vote on a new bill January 12.

In October, the ruling Law and Justice Party (PiS) killed a bill to ban abortion proposed by the “Stop Abortion” Committee. The bill was the work of a grassroots movement and, contrary to foreign press reports, was started neither by the Catholic Church nor by the government.

The Polish democratic system enables a group of citizens to initiate legislation in the lower chamber of the Parliament, called the Sejm, by gathering 100,000 signatures. The citizens’ initiative on abortion received more than 450,000 signatures.

Several organizations were behind the bill, including the Ordo Iuris Institute for Legal Culture and The Right to Life Foundation.

The proposed law left punishing women who committed abortions to the discretion of judges, a provision rejected by some pro-life organizations.

In response, the Polish Federation of Pro-Life Movements created a similar bill without legal responsibility for women, giving the pro-lifers a chance to ban abortions.

Their bill was presented to the lower house of the Parliament in September 2016. The Polish Federation of Pro-Life Movements drafted it and sent it to the Sejm’s Commission on Petitions. The Ordo Iuris and The Right to Life Foundation recently supported their actions, and the bill will be voted on January 12.

The failure of the Sejm to ban abortion in 2016 means that the 1993 law is still in place. Even though abortions are technically illegal, they are allowed in three circumstances.

The first is when a doctor suspects that the baby has a severe and irreversible handicap or an incurable and life-threatening disease. In such situations, the procedure is allowed until the baby is viable, which means late-term abortions for a 6-month-old unborn baby.

The second exception is when the woman’s life or health is endangered. There are no legal limits as to when during a pregnancy an abortion can be performed under these circumstances.

The law allows for a third exception when a pregnancy is a result of a criminal act. In those cases, abortion is permitted until the 12th week.

Some politicians consider the current law a compromise that should be left untouched. But pro-lifers refuse to compromise on the lives of the most vulnerable and innocent, and they are giving the conservative Law and Justice Party another chance to establish legal protection for the unborn in Poland.