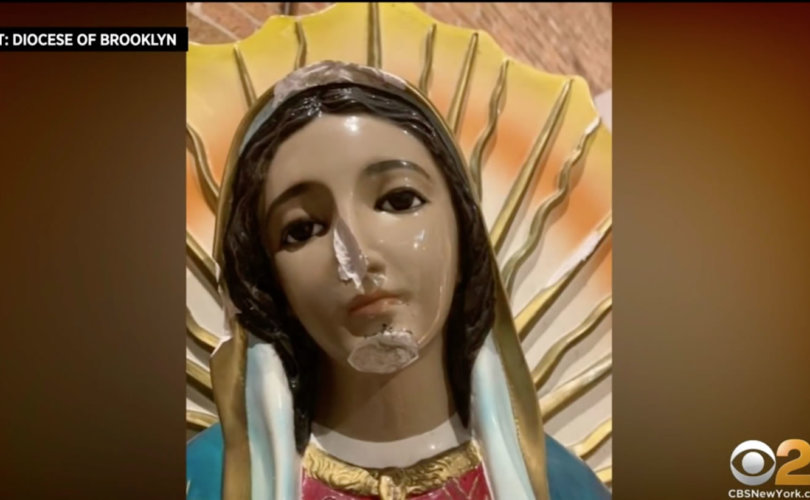 Statue of Our Lady of Gaudalupe desecrated at Brooklyn, New York church Diocese of Brooklyn, CBSNewYork

September 18, 2020 (LifeSiteNews) — Desecration of Catholic churches and symbols of the faith continues with reports emerging this week from opposite ends of the Earth.

A statue of Our Lady of Guadalupe was vandalized at Shrine Church of Our Lady of Solace. Praying for the church, as parishioners come together to raise funds to repair the statue important to the whole #ConeyIsland community. @TabletNewspaper https://t.co/aBkhpnClbF

In a video posted by Currents News, a man can be seen climbing behind a fence at the front of the Coney Island church in broad daylight, tearing down the image of Our Lady of Guadalupe, and tossing it onto the sidewalk below.

As a result, the Blessed Mother’s face was smashed and her hands were broken off.

“To attack the Blessed Mother on the day of 9/11, in the morning, in broad daylight is not only brazen, it is a direct assault on the faith of the people who were walking by that day who wanted to have a moment of prayer,” said John Quaglione, a representative of the Diocese of Brooklyn in a televised interview with CBSNewYork.

The statute was valued at $4,000, and its desecration has reportedly hit the financially struggling parish hard.

Police are still looking for the culprit whose face is clearly visible in still pictures derived from the video.

On the other side of the planet, in Lismore, Australia, an early morning fire in the sacristy of St. Carthage’s Cathedral has been deemed suspicious by authorities and is under investigation by the local arson squad, according to ABC.net.au.

Although the fire spread to the roof of the church above the sacristy, firefighters were able to contain the fire.  The main part of the Cathedral was spared, as was the tabernacle containing the Blessed Sacrament.

“A damaged building is only a building, the Church remains undamaged because the Church is the people of God,” said Bishop Greg Homeming, OCD in a video statement, according to a Catholic Weekly report.

“We’re obviously in the early stages of the investigation and we don’t know exactly how it was started, but the base of the outside door of the sacristy was on fire and even though the sacristy was well-secured the fire got into the building that way,” explained Lismore Police Inspector Anthony Smith.

The site of the fire at the Cathedral is being treated as a crime scene.