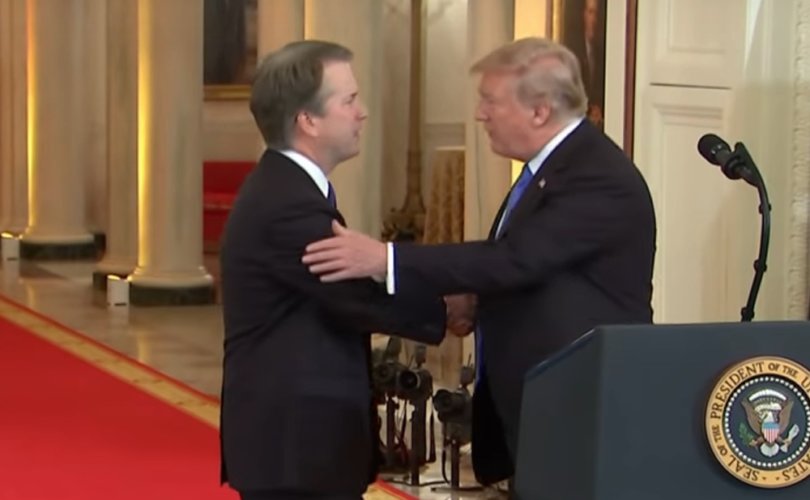 WASHINGTON, D.C., July 10, 2018 (LifeSiteNews) – Reaction to President Donald Trump’s nomination Monday of D.C. Circuit Court Judge Brett Kavanaugh to the Supreme Court remained mixed among conservatives Tuesday, ranging from disappointment for some to others saying they will wait and see.

Kavanaugh will fill the soon-to-be-vacant seat of pro-gay, pro-abortion Justice Anthony Kennedy, who announced his retirement last month. Kavanaugh is one of Kennedy’s former clerks.

After Trump announced his nomination, Kavanaugh said his judicial philosophy was straightforward.

Democrats have promised a fight over his nomination and reports say the U.S. Senate will have a lot to review with Kavanaugh’s lengthy history in Washington.

If Kavanaugh is confirmed, he will be the fifth Catholic on the nine-justice Supreme Court.

During his comments on being nominated, Kavanaugh discussed his Catholic faith and his Jesuit ties, the latter providing a potential red flag for orthodox Catholics.

“I am part of the vibrant Catholic community in the D.C. area,” he said. “The members of that community disagree about many things, but we are united by a commitment to serve. Father John Ensler is here. 40 years ago I was an altar boy for Father John. These days I help him serve meals to the homeless at Catholic Charities.”

Many social conservatives had hoped Trump would nominate Judge Amy Coney Barrett. Barrett is the Catholic mother of seven nominated last fall by Trump for the U.S. 7th Circuit Court of Appeals. She famously faced attack for her Catholic faith from California Senator Dianne Feinstein and other Democrats in the confirmation process.

Feinstein’s grilling of Barrett netted criticism for anti-Catholic bigotry. Barrett was later confirmed a U.S. Court of Appeals judge and has remained for many a standout among the SCOTUS judicial nominee contenders, for her credentials, Catholic and otherwise.

‘Four-star appointment when it could have been five-star’

While many reports say that Kavanaugh has been strong on free speech and religious liberty, others disagree. Similarly, while many pro-life advocates are praising the pick, some within the pro-life community have been concerned that his previous rulings signal he’s not as reliably pro-life as they would like him to be.

The American Family Association (AFA) released a statement Tuesday afternoon addressing concerns the group holds over how Kavanaugh would rule in cases concerning religious freedom and the right to life.

“AFA has opposed the nomination of Brett Kavanaugh to the U.S Supreme Court for some very valid reasons,” AFA President Tim Wildmon said. “We are deeply concerned about how he might ultimately rule on issues related to abortion and religious liberty. For these reasons, we consider this nomination to represent a four-star appointment when it could have been five-star.”

Wildmon went on to say that after hearing concerns from some supporters along with hearing the “passionate defense” of Kavanaugh by many in the pro-life movement, AFA is “willing to let this process play out.”

“We eagerly await the confirmation hearings when we hope to get clarification from Judge Kavanaugh on aspects related to our concerns,” said Wildmon. “At this time, we have no plans to fight President Trump on this nomination. He has appointed a lot of good federal judges already and we look forward to many more. We hope that our concerns prove to be unfounded.”

Among the conservative and pro-life groups welcoming the nomination are the Susan B. Anthony List (SBA List), the March for Life, and Concerned Women for America (CWA).

“In addition to Kavanaugh’s excellent professional qualifications, he is a man of faith, a family man, and a girls' basketball coach,” Mancini said. “He is exceptionally qualified for the role and will no doubt serve as a fair, independent judge who will remain faithful to the Constitution.”

“Judge Brett Kavanaugh is abundantly qualified to sit on the bench of the United States Supreme Court,” said Penny Nance, president and CEO, Concerned Women for America. “He is among the best and brightest jurists on the appellate courts with a reputation of being fair and impartial in his decisions. Judge Kavanaugh is known as a judge who respects the Constitution as written, refusing to legislate from the bench.”

‘We trust the president’ on Kavanaugh

Some statements of welcome came with tepid or reserved remarks.

There is a sense of focus on taking both Trump and Kavanaugh at their word – in Trump’s case, that he would nominate conservative, pro-life Supreme Court judges, and with Kavanaugh, in his saying his job on the SCOTUS bench would be to interpret, rather than make the law. There is also some emphasis on taking stock in the fact Trump chose someone from his proposed list.

“President Trump promised a constitutionalist – someone who will call balls and strikes according to the Constitution,” Family Research Council President Tony Perkins said. “We trust the president that Judge Kavanaugh will fit this mold as a justice. Judge Kavanaugh has a long and praiseworthy history of judging as an originalist, and we look forward to having a justice with his philosophical approach on the Court.”

American Principles Project Executive Director Terry Schilling said Trump had chosen “a very qualified judge in Brett Kavanaugh to nominate for the Supreme Court,” and that Kavanaugh was “a principled constitutionalist who will interpret our nation’s laws as written.”

“I support the nomination of Judge Brett Kavanaugh to the Supreme Court,” said Liberty Counsel Founder and Chairman Mat Staver. “As he has repeatedly stated, his judicial philosophy is simple – judges must interpret the law, not make it. It is the right of the people, not judges, to amend the Constitution and the laws.”

“The President has conducted this nomination process with transparency, having shared his list of potential nominees with the American people in advance,” said Father Frank Pavone, national director of Priests for Life. “We trust him and those who have advised him in this selection.”

Kristan Hawkins, president of Students for Life of America, said Kavanaugh was “a bold choice for the high court” and that he will “bring balance to the court in background and in judicial temperament.”

“This is no surprise selection,” Hawkins said. “President Trump’s list of potential nominees has been available for all to examine, and in choosing Brett Kavanaugh, he is keeping a promise to the American people.”

National Review Senior Writer David French was among those hoping for Barrett.

“The president blinked” in nominating Kavanaugh, French wrote at The Washington Post. And while conservatives will ultimately rally around the choice, he said that on Monday night, “There was, for the first time in Trump’s judicial wars, a palpable sense of an opportunity lost.”

Trump “went establishment,” French said, “made the best safe choice he could,” and “chose a man that any Republican president would have nominated.”

“The best version of Trump would have nominated Amy Coney Barrett to the Supreme Court,” he said.

As a mother of seven kids, an outspoken Christian and a graduate from a “normal” non-Ivy League law school, Barrett was the nominee to shatter the GOP mold and inflame the culture wars.

“The base-motivating, electrifying pick was right there, in the palm of his hand,” French said.

French said that conservative Christians view Barrett as both qualified and a person they feel like they know.

“Trump had — right in front of him — the judge who could be populist and principled,” said French, “the person who could galvanize the base and be an originalist judicial bedrock for the next 30 years.”