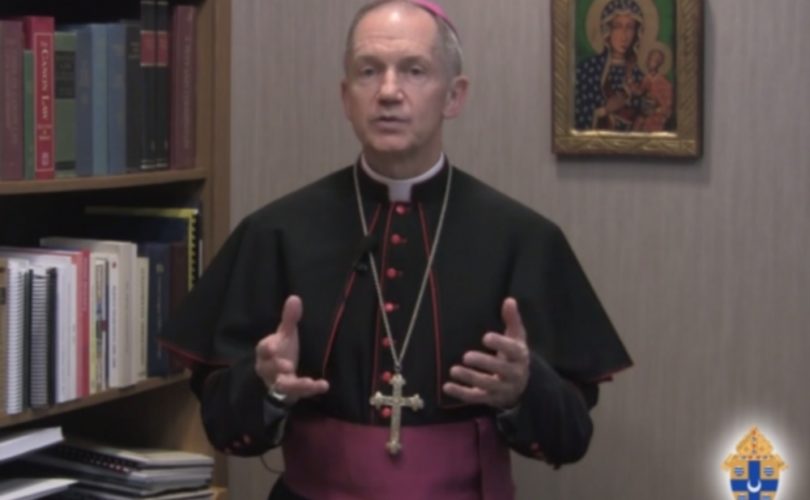 And in order for Francis to be accountable in the Church’s sexual abuse scandal as he has promised, Paprocki said, the Vatican must release any files on the disgraced former cardinal.

Paprocki opened an August 28 statement describing how “The former Apostolic Nuncio to the United States, Archbishop Carlo Maria Viganò, has revealed a set of facts and circumstances that are deeply troubling as they relate to the awareness, actions, and inactions at the very highest levels of the Church.”

He went on to quote Viganò’s testimony, saying Francis must state when he learned of McCarrick’s crimes, and whether the pope had known for certain about McCarrick on June 23, 2013, when Viganò spoke to him directly about it.

Bishop Paprocki recounted that, when Pope Francis was asked about this Sunday aboard the plane on his return flight from Ireland, Francis told reporters, “Read the statement carefully and make your own judgment. I will not say a single word on this.”

“Frankly, but with all due respect,” Bishop Paprocki said, “that response is not adequate.”

The seriousness of Viganò’s statement commanded its full vetting, he said, and if Francis is to provide the accountability he has promised, any relevant McCarrick files must be released.

“Given the gravity of the content and implications of the former Nuncio’s statement,” he continued, “it is important for all the facts of this situation to be fully reviewed, vetted, and carefully considered.”

“Toward that end,” said Paprocki, “Pope Francis, Vatican officials and the current Apostolic Nuncio should make public the pertinent files indicating who knew what and when about Archbishop (formerly Cardinal) McCarrick and provide the accountability that the Holy Father has promised.”

The bishop concluded by saying he concurred with the statement from Cardinal Daniel DiNardo, the USCCB president, that the questions raised in Viganò’s testimony “deserve answers that are conclusive and based on evidence.”

A number of prelates and other Catholics have shown support for Viganò since the release of the testimony, including Cardinal Raymond Burke; Phoenix Bishop Thomas Olmsted; Bishop Athanasius Schneider of Astana, Kazakhstan; Bishop Joseph Strickland of Tyler, Texas; San Francisco Archbishop Salvatore Cordileone and Bishop Robert Morlino of Madison, Wisconsin.

Calls for the Pope’s resignation have become part of the conversation since Francis said Sunday he would not speak about Viganò’s allegations that he knew about McCarrick.