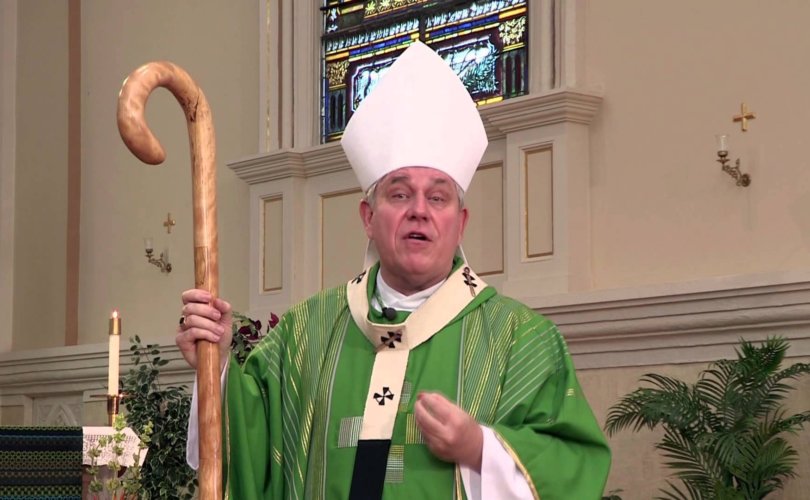 MILWAUKEE, Wisconsin, September 15, 2020 (LifeSiteNews) – Starting next Sunday, Catholics in the archdiocese of Milwaukee are obliged once again to attend Sunday Mass, ending a six month dispensation during the height of the coronavirus crisis.

“Those who deliberately fail to attend Sunday Mass commit a grave sin,” declared Archbishop Jerome E. Listecki in his most recent blog post.

“Fear of getting sick, in and of itself, does not excuse someone from the obligation,” Listecki emphasized. “However, if the fear is generated because of at-risk factors, such as pre-existing conditions, age or compromised immune systems, then the fear would be sufficient to excuse from the obligation.”

Listecki mentioned a number of possible further exceptions from being obliged to attend Sunday Mass. “If a person is ill, especially during this pandemic, they should remain at home,” he wrote. “Likewise, if a person is at risk because of age, underlying medical conditions or a compromised immune system, one would be excused from the obligation. If a person is caring for a sick person, even if they are not sick, they would be excused from the obligation out of charity.”

The archbishop encouraged the faithful of his archdiocese “to weigh their own circumstances through an examination of their conscience and determine, by use of their conscience, whether or not they are excused from the Sunday obligation.”

According to the Catechism of the Catholic Church, “The Sunday Eucharist is the foundation and confirmation of all Christian practice. For this reason the faithful are obliged to participate in the Eucharist on days of obligation, unless excused for a serious reason (for example, illness, the care of infants) or dispensed by their own pastor. Those who deliberately fail in this obligation commit a grave sin.”

“Participation in the communal celebration of the Sunday Eucharist is a testimony of belonging and of being faithful to Christ and to his Church,” the Catechism adds. “The faithful give witness by this to their communion in faith and charity. Together they testify to God’s holiness and their hope of salvation. They strengthen one another under the guidance of the Holy Spirit.”

Archbishop Listecki’s blog post also contained a brief catechesis on fulfilling the Sunday obligation, recounting his experience as a teacher of moral theology for many decades.

Listecki wrote he always said “yes” when asked if it was “really a serious sin to miss Sunday Mass.” However, “I would qualify that certain circumstances exempt a person from the obligation.”

Instead of looking at Sunday obligation as “a law that the Church imposes,” Listecki argued to see it as coming “from a deep relationship we have with God and the acknowledgment that His Son, who is our Savior and Redeemer, was raised on this particular day of the week. The importance of celebrating this day was something even the earliest of Christians could not live without.”

Listecki related attending Sunday Mass to attending certain family functions, “which demonstrate our belonging and the value that we have as family members. It is a means of acknowledging our identity and growing in our experience as a family.”

“For instance, in my home, as an extended family member, you were always expected to attend Christmas Eve dinner at my grandfather’s home and only a serious situation would justify your absence,” the Archbishop said. “Our family history and relationships were built upon this gathering and others that were deemed essential. The same holds true for Sunday Mass.”

One of the first bishops in the United States to reinstate the Sunday obligation after it was suspended across the nation was Bishop Donald E. DeGrood of Sioux Falls, South Dakota, in mid-August.

Cardinal Robert Sarah, prefect of the Congregation for Divine Worship and the Discipline of the Sacraments, wrote to the bishops’ conferences all over the world that “it is necessary and urgent to return to the normality of Christian life, which has the church building as its home and the celebration of the liturgy, especially the Eucharist.”

“As soon as is possible, however, we must return to the Eucharist with a purified heart, with a renewed amazement, with an increased desire to meet the Lord, to be with him, to receive him and to bring him to our brothers and sisters with the witness of a life full of faith, love, and hope,” Sarah pointed out in his letter dated August 15, and approved by Pope Francis on September 3.

Phil Lawler, editor of Catholic World News, released an opinion piece expressing his doubts “that the faithful of the Milwaukee archdiocese will flock back to their parish churches this coming Sunday.”

Lawler wished for bishops to release statements like, “Look, maybe I shouldn’t have issued a general dispensation. The usual rules applied then, and they still apply now. If you are sick, or have good reason to think you might become sick, then you’re excused from your obligation. That bar is naturally going to be lower during this epidemic, as it would be during any health emergency. But there still is, and always will be, a Sunday obligation.”