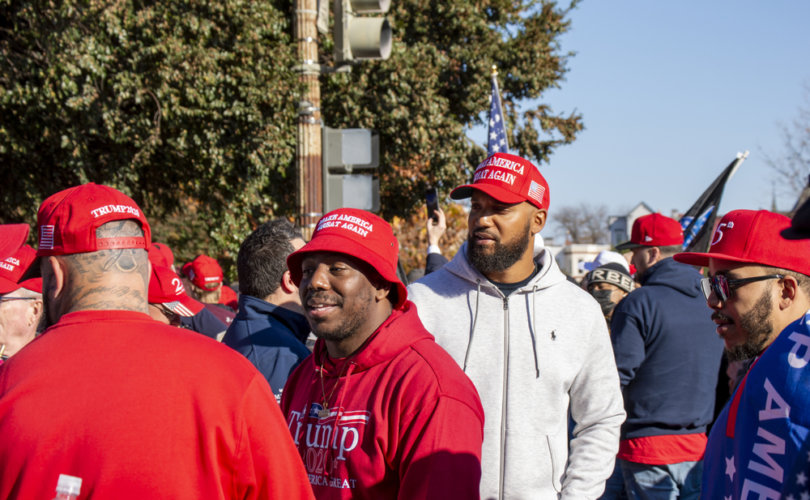 GREENSBORO, North Carolina (LifeSiteNews) – After YouTube banned a rap song critical of President Joe Biden, it reached the top of the charts on iTunes shortly thereafter, sending Adele’s comeback single “Easy on Me” to third.

Rapper Bryson Gray wrote “Let’s Go Brandon,” paying homage to the meme that has made the rounds on social media after a NASCAR race at Talladega on October 2. The phrase pokes fun at an NBC anchor’s attempted cover-up of the crowd chanting “F*** Joe Biden,” claiming that they were cheering racer Brandon Brown for his victory.

Gray, a Trump supporter, wears a MAGA bucket hat in the video, with an “Impeach Biden” T-shirt. He was accompanied by Tyson James and Chandler Crump as background vocals.

YouTube banned the music video last week, citing “medical misinformation,” referring to a lyric that says, “Pandemic ain’t real, they just planned it.” Another says, “Biden said the jab stops the spread, it was lies.”

The lyrics of the song also mention Australia’s handling of COVID-19, saying “Look at Australia, that’s what coming if we don’t stand up, stop complying with them taking our rights, it’s time to man up [sic].” Another lyric states, “Media lyin’, ignoring all the cryin’/ They buildin’ back better, but only the Taliban/ Pilots on strike, but to Joe it’s irrelevant/ Open the border, lose all the order.”

Gray, speaking to the New York Post, said, “If you read guidelines for social media sites now, the guidelines themselves are against conservatism. You literally can’t have a conservative opinion.” He went on to say, “Cancel culture doesn’t work anymore. It only works on people who are scared … all it does is help me. Thanks YouTube!”

Gray also spoke with Glenn Beck, saying, “If you want to be honest, in this country, I know we like to say we’re all free, but in reality … only one side has free speech. They can say whatever they want about Jesus and just get away with it.” He went on to say that “we can’t even question, make a joke, then we’re banned on platforms if we do that.”

YouTube banned rapper @RealBrysonGray‘s hit song “Let’s Go Brandon,” but it STILL hit #1 on iTunes. He tells me why this gives him hope the Left is LOSING its grip on the culture war. pic.twitter.com/luqoSbQff7

Gray took to Twitter after the interview, writing, “They really let a far right rap artist get on Glenn beck [sic]. What is going on? This is CRAZY! Thanks YouTube! Thanks for banning my video from your commie platform!”

They really let a far right rap artist get on Glenn beck. What is going on? This is CRAZY!

Thanks YouTube! Thanks for banning my video from your commie platform!

Another song of the same name followed Gray’s to the number two on iTunes on Monday, written by Loza Alexander. A shorter version of Alexander’s song hit number four, and a remix version reached number seven. A lyric in Alexander’s version reads, “Tried to cover it up, but tell the people, go Brandon/ But we know what they sayin’, though.” The music video shows him wearing a red MAGA-style hat with “Make Music Great Again” written in white.

YouTube has a history of banning conservative and religious channels. LifeSiteNews was banned from YouTube earlier this year. Earlier this month, the popular Catholic YouTube channel SensusFidelium was banned, only to be reinstated later that day.

A Convention of States Action poll released Tuesday shows that 57.7% of likely 2022 voters are familiar with both versions of the chant, of whom 75.9% believe that “Let’s go Brandon” is an appropriate form of protest. Biden’s approval rating is currently at 43.6%, according to FiveThirtyEight.