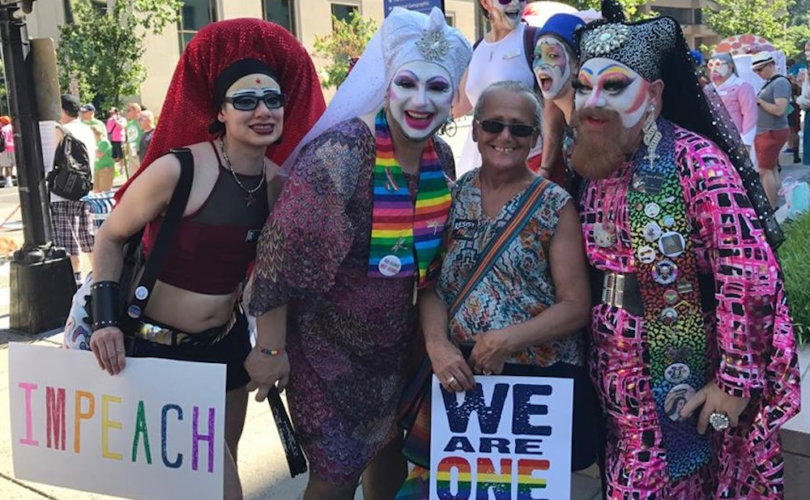 Participants in the 'Equality March' on Sunday in Washington, D.C.

Among those marching against conservative values were the “Sisters of Perpetual Indulgence,” a San Francisco-based group of self-described “queers” that the government has granted non-profit tax deductible status.

The group uses Christian terms and contorts them to mock the sacraments and church life in general, such as “Sister Inferior” and “Sister Hysterectoria.” The men call themselves “queer nuns,” even though the anti-Catholic group is openly devoted to promiscuity.

The group defends its brand of blasphemy as “irreverent wit.” Many Christians call it “hate speech.”

Planning for this “Equality March for Unity and Pride” began when January’s anti-Trump Women's March inspired homosexuals to replace Gay Pride parades with “Resist” protest marches across the country.

Marcher Timothy Kaine of Ohio explained that the “Equality March” was “about an administration denying our identity. We will resist completely.”

March co-chair Catalina Velasquez said the march was “an urgent call to action.”

Members of the “Sisters of Perpetual Indulgence”, also called the “Order of Perpetual Indulgence,” do not hide their masculine features or facial hair. Instead, they practice what is characterized as the embodiment of “gender bending,” which is to intentionally present oneself contrary to traditionally accepted male/female roles.

The “Sisters” have made a regular practice of creating disorder at Christian services. In 1982, they disrupted an interfaith prayer service at St. Mary's Cathedral in San Francisco. They also “canonize” homosexual activists with names such as “Peaches Christ.”

On Easter Sunday, the anti-Christian group has blocked off Castro Street for wild parties, complete with “Hunky Jesus” competitions. The Archdiocese of San Francisco's newspaper described the stunt as analogous to neo-Nazis celebrating on the Jewish holiday of Passover.