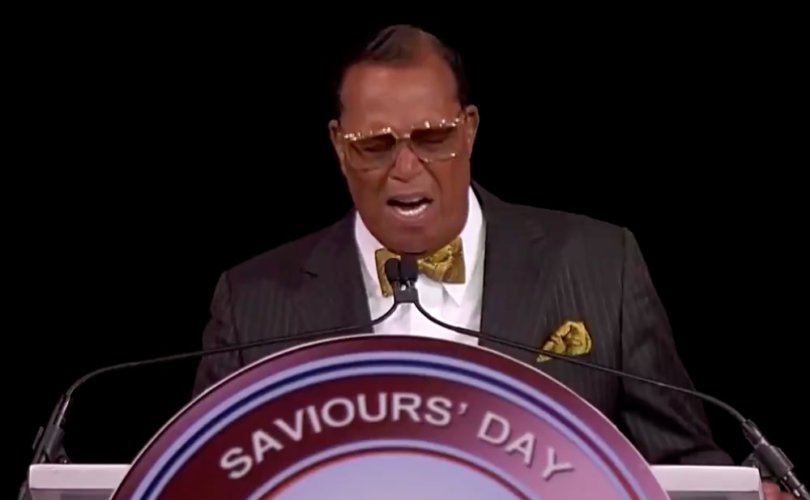 April 9, 2019 (LifeSiteNews) – Minister Louis Farrakhan, the hyperbolic leader of the Nation of Islam fringe group and an associate of various Democrat officeholders, recently tweeted highlights from a previously-overlooked speech in which he suggested that Jesus Christ was a phony and that Farrakhan himself represents the true coming of the savior.

Farrakhan delivered the speech (video, transcript) in February in Chicago, but it went largely unnoticed until he began tweeting excerpts of it at the end of March:

God does not love this world. God never sent Jesus to die for this world. Jesus died because he was 2,000 years too soon to bring about the end of the civilization of the Jews. He never was on no cross. There was no Calvary for that Jesus.

I wasn’t auditioning for the role of Jesus. pic.twitter.com/PO3AdAio0x

“God does not love this world,” Farrakhan declared. “God never sent Jesus to die for this world. Jesus died because he was 2,000 years too soon to bring about the end of the civilization of the Jews. He never was on a cross, there was no Calvary for that Jesus.” Instead, he claimed that Jesus “died in front of an old Jew’s store that was boarded up,” when Roman soldiers confronted him and said, “look, Jesus, if I bring you to them, they’re going to torture you; but if you let me kill you, I will do it so quickly that you won’t hardly feel it,” to which Jesus agreed, was quickly killed, and subsequently “embalmed to last for 10,000 years.”

“The real story is what I tried to tell you from the beginning,” Farrakhan continued. “It didn’t happen back there. It’s happening right while you’re alive looking at it. I represent the Messiah.  I represent the Jesus and I am that Jesus.” Like Jesus, Farrakhan claimed that he too has been persecuted for performing miracles.

“Every day they’re after me. Every day they’re saying something evil about me,” he said. “What have I done? For which of my good works do you stone me? You make the drug addicts, we clean them up. You take my little sisters, turn them into prostitutes and we raise them up. You bring guns and drugs into the Black community having our people kill one another and we clean them up.

“When you come and hear me preach, your eyes come open,” Farrakhan declared. “The deaf hear. The dumb speak. The lame walk and when I made the call in 1995 to Black people, with the Million Man March, that was like Jesus calling Lazarus and Lazarus came forth.”

Farrakhan has a long record of statements condemning whites and Jews, as well as promoting conspiracy theories. He has called “white devils” the “anti-Christ,” Jews “bloodsuckers” who comprise the “the synagogue of Satan,” claimed it was “apparent that there were many Israelis and Zionist Jews in key roles in the 9/11 attacks,” and in 1998 hailed Iraqi dictator Saddam Hussein as a “visionary” being persecuted by the West to “make an example out of your destruction to all strong Muslim leaders.”

In his February speech, Farrakhan also denied having called Jews “termites” in October 2018 remarks declaring he was “anti-termite” rather than an anti-Semite. He claimed that “termite” was actually referring to the wealthy “ten percent of Americans [who] now own 84 percent of all stocks.”

While few elected officeholders admit to sharing Farrakhan’s views, he has been embraced by numerous national Democrat figures over the years. Last year, the Republican Jewish Coalition called for the resignations of Reps. Keith Ellison, Barbara Lee, Maxine Waters, Danny Davis, Andre Carson, Gregory Meeks, and Al Green to resign for having associated with Farrakhan in the past. The Nation of Islam leader has also been photographed with former Presidents Barack Obama and Bill Clinton, Reverends Jesse Jackson and Al Sharpton, and former Attorney General Eric Holder.