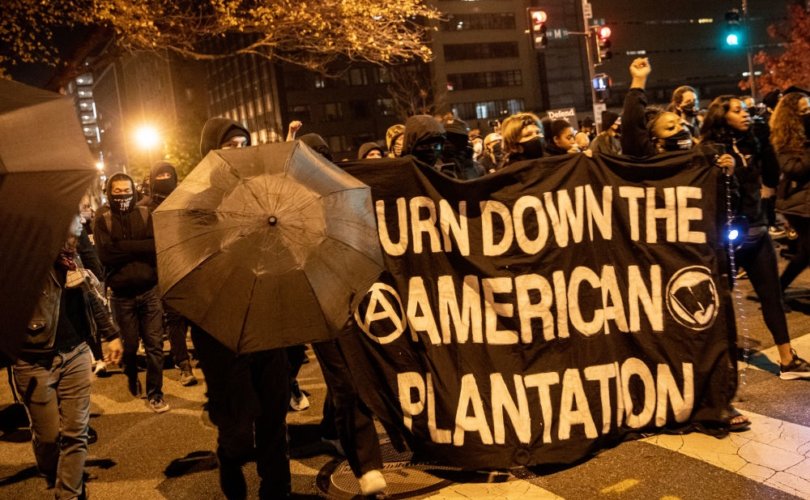 Independent reporter Brendan Gutenschwager captured footage of a scuffle and a shocking assault outside the White House. Three masked men ganged up on a young man whose face was clearly visible. After one assailant asked him his opinion on Black Lives Matter, the victim seemed to say “All lives matter.” At that, his interrogator began pushing and hitting him. Another man joined in, and the one-sided fight continued until a third man hit the victim over the head with an aluminium-looking baseball bat.

As onlookers filmed the scene or shouted, the bleeding victim managed to get up and leave the area. Some protestors followed him, but he was escorted by a larger man to safety. According to Gutenschwager, protestors in Black Lives Matter Plaza also followed retreating police officers after they made arrests in the area. One of the demonstrators led the crowd in a chant of “All cops are bastards.”

“God loves everybody,” said the missionary.

“Jesus went on the cross to die for our sins. He loves everybody: all races. All races matter to God.”

The protestors eventually drove the missionaries away. A white protestor with a megaphone told the black evangelist“to get the f*** out and go home.”

“A small but noticeable police presence is following the march in front and behind, no confrontations so far as they move north through DC,” Gutenschwager tweeted.

He then filmed a group of hundreds of people, accompanied by drummers, marching towards Black Lives Matter Plaza and chanting “anti-police” slogans.

Some of the crowd stopped walking long enough to set fire to an American flag. Some demonstrators verbally and physically attacked a man who seemed to be telling them, “Make love, not war.”

American flag set on fire a few blocks from the White House here at the protests #DCprotests #washington #DC pic.twitter.com/WMSBXJvzbq

“They have slashed the tyre of this police vehicle here as the march makes its way through the streets,” he said on one of his many videos capturing the scene. The journalist also filmed lights being flashed into the windows of what he said was a residential district.

One group of BLM marchers threatened arson if their preferred candidate didn’t win the election.

“If we don’t get it, burn it down!” Protesters on the move in DC this Election Night 2020 #DC #ElectionNight #DCProtests pic.twitter.com/xi0xJhsEzt

Nevertheless, Gutenschwager did not report any conflagration larger than a fire set inside a garbage can.