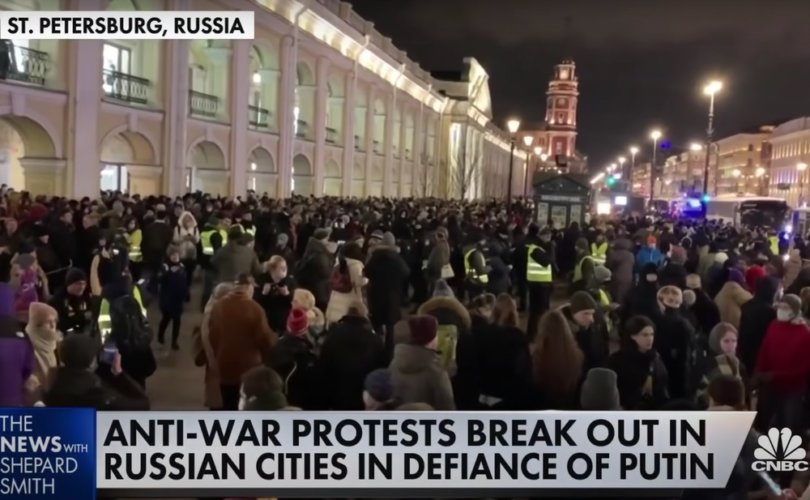 Reports indicate that demonstrators have numbered in the thousands, with large protests cropping up in dozens of cities throughout the eastern European nation.

Videos shared widely on social media show many cities, including the nation’s capital of Moscow, jammed with Russian citizens publicly taking a stand against their government’s assault on Ukraine at great personal risk.

Huge anti-war protest happening in Moscow, the capital of Russia:

Video footage captured yesterday shows the main street of the historic city of St. Petersburg filled with protesters chanting “No War!” and “Ukraine is not our enemy!”

The protests follow an emotional plea by Ukrainian President Volodymyr Zelensky urging the Russian people to oppose their government’s aggression against Ukraine.

The demonstrations also come in defiance of Putin’s threats that Russian citizens who engage in protests against the conflict will be arrested.

Russian police have already met protesters with force as the assault on Ukraine continues.

Thus far law enforcement officers have reportedly arrested at least 1,700 protesters in more than 50 cities, including Moscow and Putin’s birthplace of St. Petersburg.

Western leaders have responded to Russia’s invasion of the sovereign nation of Ukraine with economic sanctions and the deployment of troops to neighboring countries that are members of the North Atlantic Treaty Organization (NATO).

As Russian forces appear determined to topple the Ukrainian government, U.S. Secretary of State Antony Blinken has warned that Putin “may have other countries in his sights,” including NATO countries.

Blinken pointed out that under Article 5 of NATO, “an attack on one is an attack on all,” affirming that Russian aggression against a neighboring NATO country would trigger military response from allies including the United States.

The conflict in Ukraine is expected to result in a large humanitarian crisis, with thousands of Ukrainian refugees already pouring over the border of Poland seeking asylum.