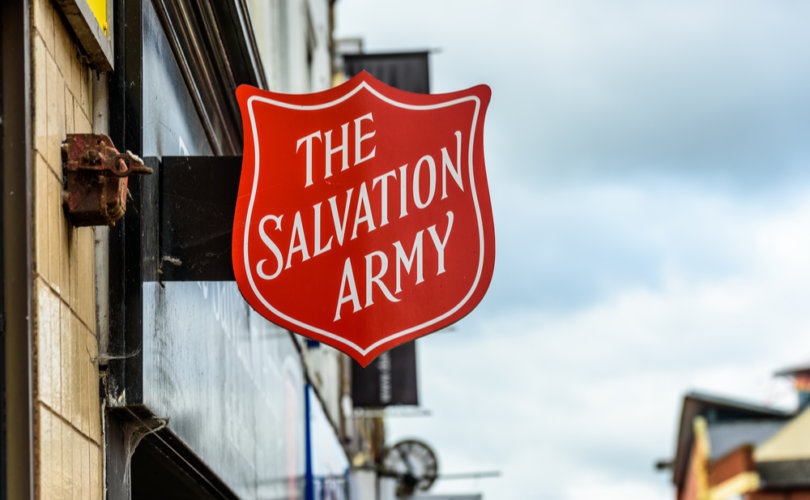 (LifeSiteNews) — An organization dedicated to combating divisive racial ideologies is calling upon the Salvation Army to acknowledge that America is not a racist country after the charity published an internal training guide urging “White Americans” to overcome their “denial of racism” and “defensiveness about race.”

Kenny Xu is the president of Color Us United, a small privately funded organization which describes itself as “the voice of those who oppose dividing America by race, religion, sexual orientation or any other characteristic.”

The group states that it stands in opposition to “those who divide Americans in the name of ‘racial equity’ — in government, schools, corporations, journalism, or social media.”

In a virtual press conference Wednesday, Xu explained that his organization has worked to expose the promulgation of pernicious Critical Race Theory curricula within the Salvation Army.

Xu said his organization has now launched an ad campaign designed to put pressure on the Salvation Army to apologize for its divisive training materials and acknowledge that America is not a fundamentally racist nation.

As the charity’s traditional Red Kettles and festive bell-ringers take their places in the doorways of shopping centers nationwide amid the holiday shopping rush, Salvation Army donors have already begun pulling their support after an internal training document apparently asking white donors to apologize for their “racism” went viral last week.

“We’re pushing hard on their holiday season, because this is the time when donors are activated,” Xu said.

If you truly believe that racism is evil—you need to get rid of CRT, which is a racist ideology, assigning certain characteristics to one race and some to others. #ColorUsUnitedhttps://t.co/uuj9ZhunID

“I hope [the Salvation Army] will release a statement as soon as possible on this to limit what they know is going to be a huge donor revolt against what they are doing,” Xu said during the Wednesday press conference. “If they do not do that, and we will continue to pressure them to do that within the next week or two, they’re going to really see it in their holiday fundraising.”

Fox News reported that the guide, which has since been pulled from the organization’s website following backlash on social media, states in its introduction that Christians must “evaluate” racist attitudes and practices, taking aim at so-called “White culture” which it said must overcome its “denial of racism” and “defensiveness about race.”

Conservatives have slammed the historically Christian Salvation Army for going “woke” and buying into the radical and divisive racial ideology commonly referred to as “Critical Race Theory.”

An academic framework which asserts that people are inherently oppressed or oppressors based upon their skin color, Critical Race Theory (CRT) has been promulgated in colleges, K-12 schools, corporate board rooms, administrative government, and more. The theory has been heavily derided by conservatives who argue the framework is misleading, divisive, and fundamentally racist.

Watson contended that ideology pitting racial groups against one another is “anti-Biblical” and undercuts the historical mission of the Salvation Army.

His organization has stated that pushing the Army to apologize for its adoption of radical racial ideology is aimed at helping the charity fulfil its true Christian mission and rather than antagonize its supporters.

A petition launched by Color Us United in opposition to the Salvation Army’s apparent acceptance of CRT asks signatories to “stand against the insertion of politically charged racial ideologies into The Salvation Army’s good work.”

The petition is also intended to generate support for a call for “the International Social Justice Commission of The Salvation Army to publicly recognize that the suggestion that their membership ought to repent on ‘behalf of the church,’ while well-intentioned, is antithetical to the Christian ethic of individual salvation.”

“We believe these actions will reverse the misconceptions of The Salvation Army leadership and allow a more honest dialogue to occur on the topic of race,” the organization states.

The Salvation Army has thus far failed to apologize for its curricula, instead arguing in a press release that claims the charity is engaging in divisive racial ideology are “sensationalist.”

“They say we’re mischaracterizing, we’re sensationalizing,” Watson said in response during the press conference. “We’re just looking at what’s there.”

In its press release, the Salvation Army said it “was never our intention” to cause “some to believe we think they should apologize for the color of their skin, or that The Salvation Army may have abandoned its Biblical beliefs for another philosophy or ideology.”

In response to the statement, conservative commentator Tim Young remarked, “No one claimed you entered a ‘political war. They did correctly claim that you pushed Critical Race Theory.”

“Your response doesn’t help,” he said, adding “[y]ou’ve lost me as a donor and avid shopper.”

No one claimed you entered a “political war.” They did correctly claim that you pushed Critical Race Theory.

Your response doesn’t help… You’ve lost me as a donor and avid shopper.

Color Us United has already obtained over 14,500 signatures for its petition urging the Salvation Army to reject divisive racial politics, and hopes to reach at least 25,000.