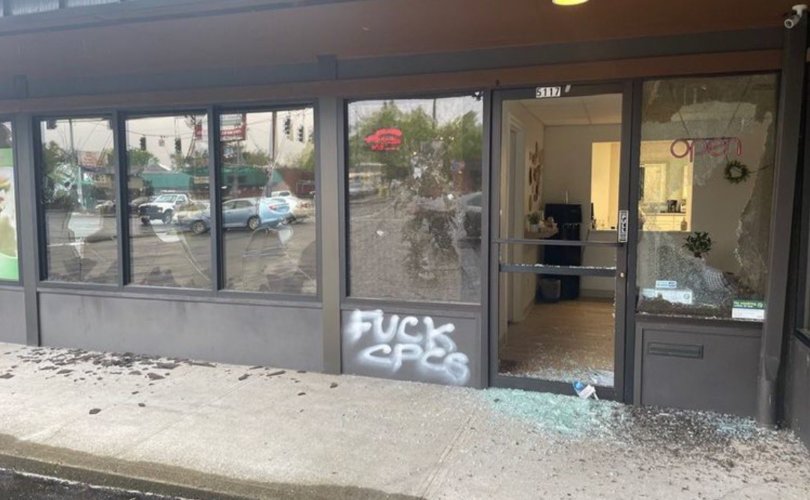 “BREAKING: Antifa pro-abort men are attacking and putting out hits on pregnancy centers in Portland, OR. Because it drives pro-abort men to violent rage to think that women will have support to choose life,” posted Rose, the founder of Live Action, on social media on Thursday.

BREAKING: Antifa pro-abort men are attacking and putting out hits on pregnancy centers in Portland, OR. Because it drives pro-abort men to violent rage to think that women will have support to choose life. pic.twitter.com/Oomlr6EGUg

“In the pro-abort Antifa Man’s eyes, the only approved choice for a woman facing unexpected pregnancy is to kill her baby. Anything else, & they will rage,” the pro-life activist charged.

Accompanying her statements are photos of what she says is a pregnancy resource center in Portland, Oregon, with shattered windows and pro-abortion graffiti saying “F*** CPCs,” with “CPCs” being shorthand for “crisis pregnancy centers.”

“So Roe isn’t about choice, it’s about dead babies,” said Margot Cleveland of the Federalist.

So Roe isn’t about choice, it’s about dead babies. https://t.co/OyGZKIVPA2

“Antifa account @rechelon compiled a list of addresses of centers to target in the Portland-area,” replied Andy Ngo, editor-at-large at Post Millennial, suggesting this attack may end up being part of a larger collection of attacks against pro-life institutions.

While pro-abortion supporters often mischaracterize pro-lifers as “anti-woman” or merely “pro-birth,” suggesting they only want women to give birth but after the birth provide little to no assistance, crisis pregnancy centers do indeed aid women before, during, and after the birth of their child.

“Pregnancy centers like this one (staffed by 10,000+ licensed medical workers) served almost 2 million people nationwide in 2019, providing free services during and after pregnancy — including nearly 1.3 million packs of diapers, more than two million baby outfits & so much more,” explained president Marjorie Dannenfelser of the pro-life Susan B. Anthony List organization.

It is not just pro-life pregnancy centers but also Catholic churches that have been the target of vandalism and destruction by pro-abortion activists since the U.S. Supreme Court draft leak that indicates the landmark pro-abortion Roe v. Wade decision may soon be overturned by the court.

As reported by LifeSiteNews, on Wednesday a Catholic church in Colorado was attacked by pro-abortion activists, who using spray paint scrawled anti-Catholic and pro-infanticide messages on the church

The vandals also desecrated a statue of the Blessed Virgin Mary and the Child Jesus, covering their eyes and hands in red paint.