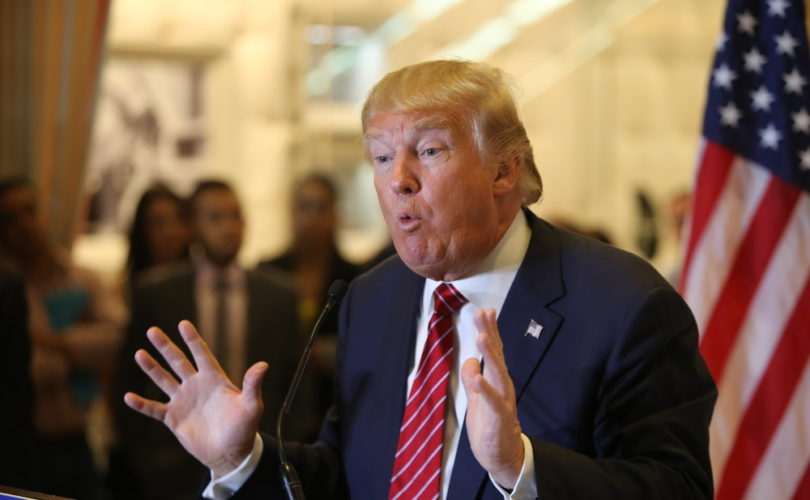 DES MOINES, Iowa, February 1, 2016 (LifeSiteNews) – In a letter addressed to pro-life Iowans, female pro-life leaders across the country urged voters to “support anyone but Donald Trump.”

The letter’s ten signatories included some of the most prominent women in the pro-life movement, including Beverly LaHaye, Marjorie Dannenfelser of the Susan B. Anthony List, talk show host Star Parker, and former Congresswoman Marilyn Musgrave.

“On the issue of defending unborn children and protecting women from the violence of abortion, Mr. Trump cannot be trusted,” the women wrote. “We have come to this conclusion after having listened patiently to numerous debates and news reports, but most importantly to Donald Trump's own words.”

They write that our next president will choose as many as four Supreme Court justices, potentially giving the court a majority to overturn Roe v Wade. “Mr. Trump has said his sister, Judge Maryanne Trump Barry, who struck down the partial birth abortion ban in New Jersey, would be a 'phenomenal' choice for the court,” they wrote.

They also raised the issue of Trump's sometimes difficult relationship with women.

“Trump has profited from the exploitation of women in his Atlantic City casino hotel, which boasted of the first strip club casino in the country,” and his penchant for name-calling has “impugned the dignity of women.”

“America will only be a great nation when we have leaders of strong character who will defend both unborn children and the dignity of women,” they concluded. “We cannot trust Donald Trump to do either.”

How correct are the charges?

Without a legislative record, analysts must rely on Trump's words to determine his position on the issues. As far as the record indicates, here is where Donald Trump stands.

Presidential hopeful Donald Trump has said that he has “evolved” from being “strongly pro-choice” to being pro-life “with caveats” for rape, incest, and to save the life of the mother.

Last week in Iowa, Trump said that he “never gave it much thought,” since abortion was not regularly discussed in the business world in which he immersed himself. While he has always said he hated “the concept of abortion,” he called himself “very pro-choice” in an October 1999 interview on Meet the Press on October 24, 1999. In the same interview, he said he would not favor a partial birth abortion ban.

He changed his position on that matter just months later. In his book The America We Deserve – published on January 1, 2000 – Trump wrote: “When Tim Russert asked me on Meet the Press if I would ban partial-birth abortion if I were president, my pro-choice instincts led me to say no. After the show, I consulted two doctors I respect and, upon learning more about this procedure, I have concluded that I would indeed support a ban.”

He has consistently said he's pro-life since 2011. The turning point, he said, was when a married couple he knew disagreed about their child. The husband wanted an abortion but the mother, whom he called a “strong woman,” refused. The child became the light of his father's life and impressed Trump – who called him “a superstar.” That abortion might have killed such a precious child changed Trump's views.

He has said that as president he would sign the pain-capable abortion ban, and would defund Planned Parenthood unless it stops all abortions.

He wrote in a Washington Examiner op-ed on Saturday, “The Supreme Court in 1973 based its [Roe v. Wade] decision on imagining rights and liberties in the Constitution that are nowhere to be found. … Public funding of abortion providers is an insult to people of conscience.”

Despite his editorial, he is still reticent discussing abortion, or social issues generally, as opposed to the patriotic issues he has stressed in his campaign: immigration enforcement, trade, and striking better economic deals.

Last week, he said he is pro-life, but “I just don't want to talk about that right now. Everybody knows my views and I think my views are very plain.”

Trump has never favored homosexual “marriage,” telling the homosexual publication The Advocate in 2000 that marriage should be “between a man and a woman” – a position he has maintained consistently. He once favored civil unions before opposing them. He told the New York Times in 2011, “I am a traditionalist. I have so many fabulous friends who happen to be gay, but I am a traditionalist.”

But after the Supreme Court ruling last summer redefined marriage nationwide, he said “you have to go with it,” because it is  “the law of the land.” Kim Davis, he said, should not be forced to issue gay “marriage” licenses – either her clerks should issue them instead, or homosexual couples could go to another county.

He strongly supports granting new, special civil rights to homosexuals. He would support adding sexual preference as a protected class to the 1964 Civil Rights Act, alongside racial and sexual minority status.

When asked if he would overturn Roe v. Wade, he said that a president would “need a lot of Supreme Court judges” to change their votes, but “we are going to be looking at that very, very carefully.”

While Trump has praised his sister, Maryanne Trump Barry, in general terms, he has criticized Chief Justice John Roberts for twice ruling that ObamaCare is constitutional.

Trump has said he would like to appoint Supreme Court justices in the mold of Clarence Thomas, a pro-life stalwart he called “strong and consistent.”

The real estate magnate is known for his eponymous holdings, including casinos. The Taj Mahal casino in Atlantic City became the first to have a strip club on the premises in 2013. At the time, Trump personally held only five percent ownership in the casino, leaving decisions out of his hands.

However, there is no record that he ever registered an objection to the club's presence.

His grandfather, Friedrich, also ran restaurants, bars, and brothels in the Northwest during the Alaska gold rush.

Donald Trump's contributions to political candidates have spanned both parties, to politicians of widely varying ideologies – including some well-known Democrats who favor abortion. But overall, two-thirds of his contributions have gone to Republicans, some with strong pro-life and conservative views.

The real estate mogul has said he treated his campaign contributions as part of the cost of doing business, often as a way of buying favor with politicians who would use their influence to help his development projects.

“I gave to many people before this,” Trump said last August. “Before two months ago, I was a businessman. I give to everybody. When they call, I give. And you know what? When I need something from them two years later, three years later, I call them – they are there for me.”

“That's a broken system,” he said.

Much of his record would bear that out. For instance, in 2004 he gave the maximum legal campaign contribution to George W. Bush and John Kerry within eight days of each other. In the 2008 race, he funded both John McCain and Hillary Clinton – but nothing to Barack Obama. He has funded both parties' efforts to retake the Senate.

Trump has made numerous campaign donations to Democrats, especially in the Northeast where he has done much of his business. These include multiple donations to onetime New York Senator Hillary Clinton, as well as the Clinton Foundation. Others include Kristen Gillibrand, Chuck Schumer, Anthony Weiner, Charlie Rangel, Joe Lieberman, Chris Dodd, and Patrick Kennedy.

Many of his donations went to influential Congressional leaders like Tom Daschle, Dick Gephardt, and Harry Reid.

He also funded former South Carolina Sen. Ernest “Fritz” Hollings who, like Trump, has been an inveterate critic of free trade deals.

He made a handful of donations to “pro-choice” Republicans like Arlen Specter and Rudy Giuliani.

In 2010, he gave a hefty $50,000 to American Crossroads, the political organization founded by Karl Rove.

He has also donated to former pro-life Congressmen Allen West and George Allen.

Treatment of women and temperament

Trump's critics have often cited his temper, often flaring into heated Twitter exchanges, as a concern.

New York Times journalist Gail Collins said that, after writing a less than flattering column about him, Trump sent her a copy of her picture with the words “The Face of a Dog” printed on it.

In his personal life, Trump has been divorced three times, confessed to numerous affairs, and bragged about “getting laid” with numerous women – some of them married – in his life. In a 1991 interview for Esquire, he said, “It doesn't really matter what [the media] write as long as you've got a young and beautiful piece of [expletive].”

Despite being less forthright, or firm, on social issues addressed in the Bible, Donald Trump has consistently had the majority support of evangelical Christians in surveys and polls. According to an NBC News/Survey Monkey online poll taken last Tuesday, Trump has the highest percentage of support from evangelical Christian evangelicals (37 percent) of any candidate. His nearest rival Ted Cruz, whose father is a pastor, has earned the support of only 20 percent of evangelicals.  Dr. Ben Carson has 11 percent, and Marco Rubio is at 10 percent.

The Donald J. Trump campaign did not respond to multiple calls for an interview over several days. Rival campaigns also did not return calls.