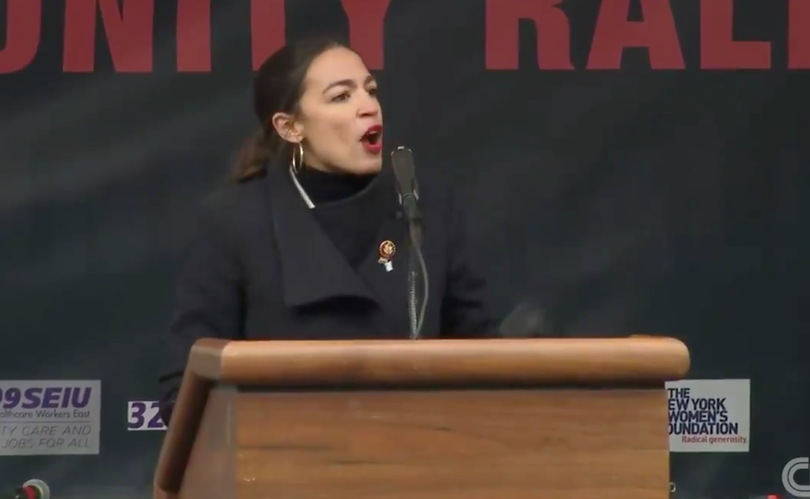 February 26, 2019 (LifeSiteNews) – Rep. Alexandria Ocasio-Cortez, D-NY, questioned over the weekend whether people should stop having children due to supposed man-made climate change.

The controversial Democratic Socialist congresswoman has been known since before her election last November for numerous outrageous statements on a variety of issues, including climate alarmism.

Continuing in this vein two months into her tenure of office it was this climate alarm upon which Ocasio-Cortez predicated her comments, claiming that it’s legitimate to question whether it’s “okay to still have children,” given there’s a “scientific consensus” that their lives “are going to be very difficult” because of climate change.

“Our planet is going to face disaster if we don’t turn this ship around,” she stated. “And so it’s basically like, there’s scientific consensus that the lives of children are going to be very difficult, and it does lead, I think, young people to have a legitimate question: should – is it okay to still have children?”

In comments she broadcast Sunday night via Instagram while preparing food in her kitchen, Ocasio-Cortez threw in the issue of college graduates today who enter the work world with significant debt – a liberal talking point often used to promise free tuition – to question whether it was moral to have children, because, she said, their lives would be negatively affected by college debt.

“And, I mean, not just financially,” she stated, continuing on the question of whether it’s still okay to have kids, “people are graduating with 20, 30, a hundred-thousand-dollars worth of student loan debt.”

“And so they can’t even afford to have kids and a house,” said Ocasio-Cortez, “but also just this basic moral question, like, what do we do?”

The New York congresswoman then switched focus to children who have been born.

“And even if you don’t have kids, there are still children here in the world,” she said, “and we have a moral obligation to them, to leave a better world for them.”

Ocasio-Cortez, who identifies herself as Catholic, supports abortion.

“Alexandria does not accept any federal, state or local rollbacks, cuts or restrictions on the ability of individuals to access quality reproductive healthcare services,” according to her campaign platform. “This means open access to safe, legal, affordable abortion, birth control, and family planning services.”

She has voiced support for LGBT issues and transgenderism, which also conflict with Catholic Church teaching.

She disparaged her political opponents in a campaign email six days before last fall’s election, calling for supporters to vote Democrat so “we can defeat the brutal white supremacist forces of anti-Semitism, anti-immigrant nativism, and racism.”

“We can send a message to the bigots and billionaires that this country belongs to all of us,” she said in an apparent swipe at President Donald Trump. Then, continuing to the attack Republicans, she called them “the cold-hearted monsters who have repeatedly attacked our health care.”

Climate activists frequently push population control or abortion in advancing their cause, with the argument that human beings are bad for the environment, presuming the latter takes precedence. This departure from Church teaching disregards the fact that people are made in the image and likeness of God, and that man, having a soul and this sacred designation, is a steward of the earth who precedes the environment.

The Church also rejects the notion that potential perceived difficulties in a person’s nascent or potential life justify in any way either abortion or population control.

It has made headlines with its extreme or otherwise unrealistic, or silly components – the latter stemming from the congresswoman’s accompanying “Frequently Asked Questions” document, deleted from her website after some of is specifics were roundly ridiculed for outlandishness.

Among the most controversial aspects were the deal’s promising economic security to those “unwilling to work,” and Ocasio-Cortez’s document promising to eliminate the need for air travel and flatulent cows.

Ocasio-Cortez has “repeatedly [compared] fighting climate change to fighting Nazi Germany,” the Daily Wire reports, noting the socialist has claimed that the world is going to end in 12 years if her policies are not enacted.

She has continued to draw media attention and mockery related to the Green New Deal and her statements, continuing with her striking back at critics of the deal at a recent event on New York City, where she said “no one else has even tried” to propose climate change policy before.

Dismissing critics who’ve assessed the plan as unrealistic, vague or incomplete, Ocasio-Cortez insisted that she is in charge.