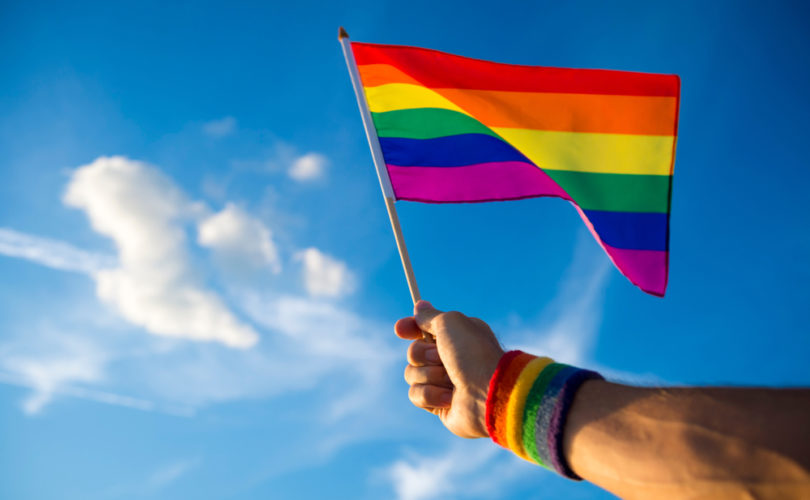 TORONTO, May 7, 2021 (LifeSiteNews) – The Toronto Catholic District School Board (TCDSB) voted last night to declare June “Pride Month” and to fly the homosexual rainbow “Pride” flag at all schools within the board for the entire month of June in defiance of Catholic moral teaching that warns against the spiritual dangers of homosexual behavior and in defiance of the local Archbishop’s directives on the matter.

“With this vote, the TCDSB stepped into apostasy. It is no longer Catholic,” Jack Fonseca of Canada’s pro-life and pro-family organization Campaign Life Coalition told LifeSiteNews.

“Watching the trustees debate last night, I couldn’t believe that I was witnessing an official arm of the Roman Catholic Church agree to celebrate sexual sin. It was horrifying,” he added.

The vote comes in the wake of the TCDSB’s newly-established “2SLGBTQ+ Advisory Committee” recommending that the board proclaim June as Pride month and that the Pride flag be raised “at the Catholic Education Centre and at all schools in the system.”

Declaring June as Pride month “implores us to be compassionate, welcoming, and inclusive of marginalized people, including 2SLGBTQ+, as an example of our faith in action,” the pro-LGBT Committee stated in a report submitted to the board for the meeting last night.

The recommendations passed 7-5. Delegations at the meeting — which ended about 2 a.m. — included former Ontario Premier and current MPP Kathleen Wynne, a lesbian who as former Education Minister a decade ago was responsible for launching the pro-homosexual Equity and Inclusive Education (EIE) strategy that encouraged school boards to participate in Gay Pride parades, use texts by homosexual authors, and introduce into schools gay-straight alliance clubs. Pro-homosexual Toronto City Councillor Kristyn Wong-Tam also made a delegation.

The Board of Trustees has voted in favour of proclaiming Pride Month every June starting in 2021; & that the Pride flag be flown at the Board office & all #TCDSB schools for the month of June.

Another delegate was Fr. Michael Simoes, a local priest and chaplain for the Vatican-approved ministry to homosexuals called Courage. He told trustees that declaring June as Pride month and flying the Pride flag would amount to “fatally undermining the mission of the TCDSB.”

“Everywhere (the Pride flag is) raised, traditional beliefs about life and family are compromised and eventually suppressed. And the brave souls who defend those beliefs are vilified, hounded and marginalized,” he said.

There were some trustees such as Nancy Crawford, Michael Del Grande, and Teresa Lubinski who made the case that to fly the Pride flag would mean to support sexual behaviors that are at odds with Catholic sexual moral teaching.

“The Pride Flag and the Pride movement go against our Catholic faith in many ways,” said Trustee Crawford at one point during the meeting.

Trustees Garry Tanuan and Joe Martino joined the above-mentioned trustees in voting against flying the Pride flag at school. Martino, however, voted in favor of flying the flag at the board’s Catholic Education Center and recognizing Pride Month.

Teresa Pierre, president of Parents as First Educators, said that the outcome of last night’s meeting means that the “sex-ed agenda has taken another step in swallowing up the Toronto Catholic District School Board.”

“Last night, contrary to thousands of parents who voiced their opposition, and in defiance of a letter from Toronto’s own Catholic Cardinal Archbishop, the motion to fly the ‘Pride Flag’ at all board schools during the month of June passed,” she wrote in an email to parents.

Pierre was referring to a letter sent to the board this week from the Archdiocese of Toronto, where Cardinal Thomas Collins is Archbishop, that advised the TCDSB against voting to fly the Pride flag at its schools in June.

The Archdiocese stated in its letter that parents “make a clear choice when they decide that their children will attend a Catholic school. They rightly expect that trustees, principals, teachers — all partners in education — will ensure that Catholic teaching is presented, lived and infused in all that we do.”

“Shame on them,” she said about the trustees who voted in favor of the recommendations.

Fonseca told LifeSiteNews that Catholic parents within the board have been betrayed by those elected to safeguard Catholic education.

“Everybody knows that the Gay Pride flag and ‘Pride Month’ represent ideologies that embody the rejection of Christian doctrine,” he said. “The gay Pride flag represents the belief that homosexual relationships are equivalent to biblical marriage. It represents support for the adoption of children by homosexuals which places them in permanently and obligatorily fatherless or motherless situations. It represents the belief that sodomy and other same-sex sex acts are morally acceptable and not sinful.”

“These ideologies are diametrically opposed to Catholic doctrine and Christian anthropology of the human person. They are evil,” he added.

Fonseca said that faithful Catholics owe thanks to Trustee Del Grande and Father Simoes for giving during the meeting “prophetic witness to Catholic moral teaching, and to the reality denied by proponents on the other side, that embracing Gay Pride will result in persecution of the faithful, division, and serve as an anti-witness to the Gospel.”

He also criticized Cardinal Collins for not doing enough to protect Catholic schools and the children who attend them from the advancement of the homosexual agenda.

“The Cardinal’s May 4 letter to the board was half-hearted. The last paragraph gave the dissident trustees an out, by essentially saying they could do what they want. The Cardinal did not threaten to impose any penalty on the board or individual trustees.  The pending apostasy was grave enough that Cardinal Collins could easily have warned trustees, either privately or publicly, that they would face excommunication if they voted to embrace the sin-laden secular symbol.”

LifeSiteNews reached out to the Archdiocese for comment about the TCDSB vote last night but did not receive a response.

Fonseca said that parents within the board must take a bold stand over this matter to fight for their Catholics schools. He said that Campaign Life Coalition will work to elect faithful Catholics to replace all eight of the trustees who voted for the measures. “With a majority, this evil policy could be retracted,” he said.

He also said that pressure could be brought to bear on Cardinal Collins to “support the creation of an alternate, private Catholic school system run by faithful Catholic teachers, nuns and priests.” He also pointed out that there are also legal avenues of redress that have been already laid out by Catholic lawyer Geoff Cauchi.

“The legal path laid out by Cauchi could be explored which suggested a class action type lawsuit against the board seeking remedy against trustees who voted to violate the constitution mandate of Catholic schools.  This path would require at least one, and ideally, multiple Catholic electors in Toronto to step forward as plaintiffs,” he said.