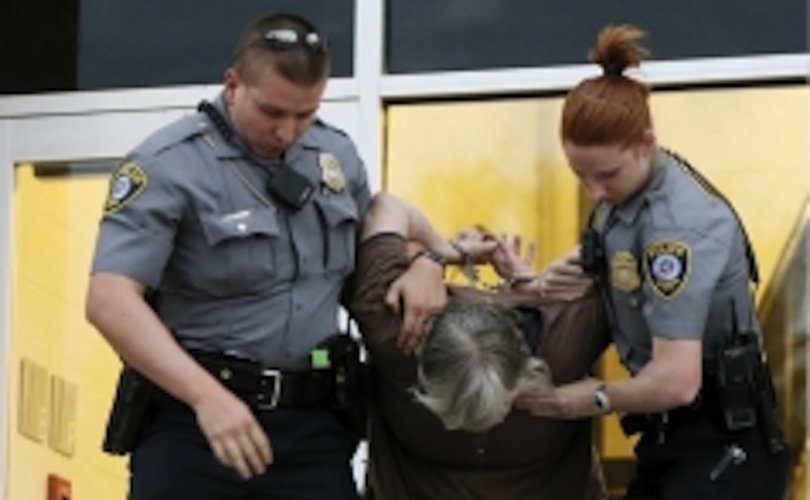 OKLAHOMA CITY, Oklahoma, August 22, 2016 (LifeSiteNews) — An Oklahoma appeals court overturned a pro-life activist’s convictions for kneeling and praying the rosary while a “black mass” was held inside a government building.

Joan Andrews Bell was arrested September 21, 2014, at the Oklahoma City Civic Center, which was used by a Satanist group for a “black mass,” a profane ritual mocking the Catholic Mass.

Before the “black mass,” the Archdiocese of Oklahoma City filed a lawsuit against the Satanists for illegally obtaining a consecrated host — something Catholics believe is the literal body, blood, soul, and divinity of Jesus Christ — from a Catholic Church for desecration during the ceremony. The group returned the host but then performed the ritual anyway.

Bell knelt and prayed in front of the entrance to the Civic Center and was arrested for refusing to move.

Bell’s original arrest for trespass was later changed to a disorderly conduct charge.  The Court ruled that Bell’s arrest was “unlawful” and accepted her lawyer’s arguments that she had a right to momentarily go limp to passively resist her arrest. The Court also ruled that because Bell was arrested on public and not private property, the city’s arrest charge was lacking.

“The City has failed to show that Bell obstructed access to the Civic Center, and we find there was insufficient evidence to support the charged offense” of trespassing, according to the Court’s 18-page ruling. “Bell reasonably resisted officers during an unlawful arrest for the City’s unsupported trespass charge.”

“This is an important victory for the rights of Catholics in America, faced with a rising tide of anti-Catholic hatred, in this case officially sanctioned by the City of Oklahoma City,” Christopher A. Ferrara, the president and chief counsel of the American Catholic Lawyers Association, said in a statement. “ACLA attorneys are now reviewing the options, including a federal civil rights lawsuit on Mrs. Bell’s behalf. The gross violation of civil and constitutional rights in this case must never happen again in Oklahoma City.”

Bell is a veteran pro-life activist who has advocated for women and their unborn children for decades. She was heavily involved in the Rescue Movement, an era of pro-life activism before then-President Bill Clinton signed the Freedom of Access to Clinic Entrances Act. FACE severely punishes pro-lifers for blocking abortion facility entrances.