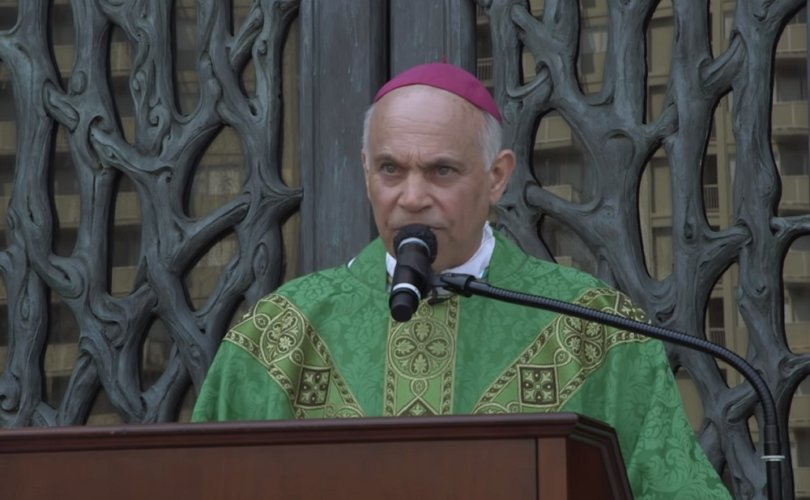 September 21, 2020 (LifeSiteNews) — During his Sunday homily, San Francisco archbishop Salvatore Cordileone delivered a powerful message to the city’s politicians who have kept Catholic churches in lockdown, saying, “One person at a time inside of this great Cathedral to pray? What an insult. This is a mockery.”

Archbishop Cordileone slammed the city’s Mass restrictions at an outdoor Mass on the Plaza of San Francisco’s Cathedral of St. Mary of the Assumption, following Eucharistic Processions that had converged at the plaza before Mass.

“The highest law is love of God, and love of neighbor,” said Archbishop Cordileone. “And that law has to take precedence over human-made law of the state, when government would ask us to turn our backs on God, or on our neighbor in need.”

“Months ago, we submitted a safety plan to the city including masks and social distancing, just like indoor retail stores did. The city said yes to indoor retail, but we Catholics are still waiting to hear back. The city continues to place unrealistic and suffocating restrictions on our natural and constitutional right to worship,” said Cordileone, to the sustained applause of the faithful gathered.

“This willful discrimination is affecting us all. And yes, it’s discrimination. There is simply no other word for it. We ask: Why can people shop at Nordstrom’s at 25% capacity but only one of you at a time is allowed to pray inside of this great cathedral, which is your cathedral? Is this equality?  No, there is no reason for this new rule except a desire to put Catholics — to put you — at the back of the line,” he said.

“For months I have pleaded with the city on your behalf, advocating for your need of the consolation of the Mass, and the consolation you derive from the practice of your faith and connection with your faith community. City Hall ignored us. City Hall ignored you. They didn’t deny it, but they simply ignored you. It has become clear to me that they just don’t care about you. To them, you are nothing. To them you don’t matter,” he stressed. “Let me repeat that: to City Hall, you don’t matter.”

Archbishop Cordileone was only warming up.

“Our city has abandoned God.”

“We know that when God is rejected by society, it only brings misery and despair,” continued the archbishop.

“Just look around our city. What has happened to our beloved city?” he asked. “San Francisco was once known as a place of great beauty and hospitality.”

Cordileone said that now, when people think of San Francisco, they think of rampant homelessness and sprawling tent cities, drug-dealing and “shooting up in broad daylight,” and human feces on the streets.

“Our city has abandoned God,” he declared to the thunderous approval of the crowd.

Our Blessed Lord is openly mocked to the gleeful friends of the cultural elites. The sacred symbol of the religious habit is blasphemed with the glowing approval of those who profess mutual respect and tolerance for others who are different while they openly discriminate against us.

What do we people of faith do when faced with sheer godlessness?

We have patiently been putting up with unjust treatment long enough. And now it is time to come together to witness to our faith and to the primacy of God and to tell City Hall, “No more.”

Cordileone, who had consecrated the archdiocese to the Immaculate Heart of Mary, stressed that all must “live the consecration” by “praying the rosary daily, and as a family at least once a week” and by “spending at least one hour a week in Adoration of our Lord in the Blessed Sacrament” and “by fasting on Fridays and by frequently availing yourselves of the Sacrament of Penance.”

“I never expected that the most basic religious freedom, the right to worship — protected so robustly in our Constitution’s First Amendment — would be unjustly repressed by an American government,” Cordileone proclaimed in a Washington Post op-ed last week.

“But that is exactly what is happening in San Francisco. For months now, the city has limited worship services to just 12 people outdoors,” said Cordileone. “Worship inside our own churches is banned. The city recently announced it will now allow 50 for outdoor worship, with a goal of permitting indoor services up to a maximum of 25 people by Oct. 1 — less than 1 percent of the capacity of San Francisco’s St. Mary’s Cathedral.”

“And it is not just San Francisco. According to the Becket Fund for Religious Liberty, six states with a combined population of 67 million Americans single out religious worship for unfavorable treatment compared to similar secular activities: California, New Jersey, Maine, Virginia, Connecticut and Nevada,” he continued. “When government asserts authority over the Church’s very right to worship, it crosses a line. Our fundamental rights do not come from the state. As the authors of our Declaration of Independence put it, they are ‘self-evident’ — that is, they come from God.”

“All we are seeking is access to worship in our own churches, following reasonable safety protocols — the same freedoms now extended to customers of nail salons, massage services and gyms,” he concluded. “It’s only fair; it’s only compassionate; and, unlike with these other activities, it’s what the First Amendment demands.”

To support Archbishop Cordileone’s call for the reopening of Catholic Masses, xign the petition here.