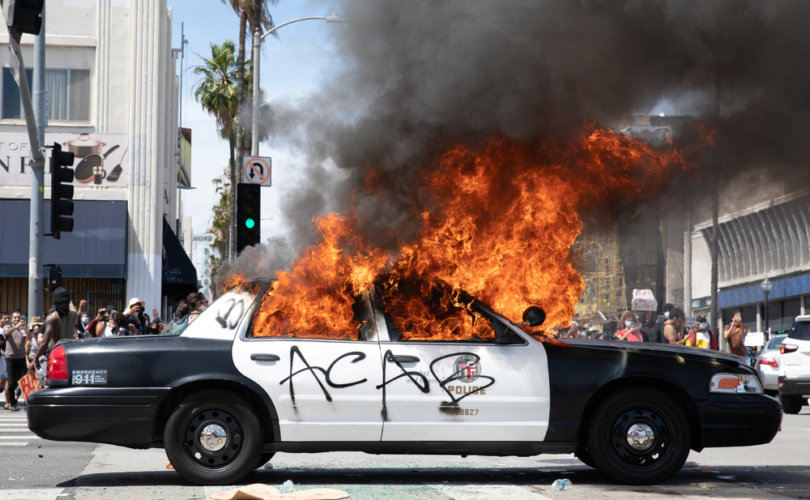 LOS ANGELES - MAY 30, 2020: Police Car Being Burned During Protest March Against Police Violence Over Death Of George Floyd.Hayk_Shalunts / Shutterstock.com

July 22, 2020 (LifeSiteNews) – The far-left Black Lives Matter (BLM) movement has risen to unprecedented levels of mainstream acceptance over the past few months, thanks in no small part to the overwhelming number of endorsements, at times accompanied by significant donations it has received from major brands and corporations.

The above are just a few of the leading names in entertainment, sports, technology, retail, food, apparel, and more to either endorse BLM by name or issue statements endorsing the group’s central narrative that “systemic racism” permeates American institutions.

Many of those companies have also pledged millions of dollars in donations to left-wing organizations such as the American Civil Liberties Union (ACLU) and the NAACP Legal Defense Fund, as well as to BLM itself, in the name of promoting racial equality and “reforming” law enforcement.

How many of these overtures to BLM reflect the aforementioned companies’ true values remains an open question, however. While corporations often adopt viewpoints for public-relations purposes, and companies such as Apple and Google are run by liberal ideologues naturally aligned with BLM, this latest wave of support coincides with a nationwide wave of violence and intimidation from pro-BLM protesters.

“These corporations have tremendous presence in black communities and are in close proximity to the riots. Their exposure is not limited to physical assets that might be looted or damaged; brands themselves may suffer reputational damage,” Grant Baker writes at the American Thinker. “After a black drunk driver who pointed a stolen taser at a police officer was shot dead in a Wendy's parking lot, the restaurant was set ablaze in retaliation. Wendy's, its logo in the frame of every photo of the incident, loudly announced a $500,000 donation to social justice causes and affirmed its support for the BLM movement.”

“Corporations are making these donations as protection money, hoping to bribe officials of BLM-affiliated organizations into steering the mob away from their store,” Baker continues. “The BLM mobs are far from organic; they are well funded corporate entities plucked off the shelf and filled with professional activists to run them. These activists use their platform to target other corporations with exposure to the riots and pressure them into making donations. Corporations are quick to pick up on the implied threat and immediately capitulate, handing money to their extortionists.”

Whatever their motivations, the deluge of brands boosting BLM across traditional and social media has clearly influenced the general public. An ABC News/Langer Research Associates poll released Tuesday finds that 63% of Americans support Black Lives Matter, including 28% of self-described Republicans and 34% of self-described conservatives (though that support has not yet translated to majority support for policies such as defunding police departments or removing Confederate statues).

It’s doubtful that those numbers would remain as high, or that as many companies would have endorsed it, if the full scope of Black Lives Matter’s true views were more widely known.

While popularly framed in the media as simply a movement to promote racial equality and end police brutality, BLM declares among its official goals “disrupt(ng) the Western-prescribed nuclear family structure requirement by supporting each other as extended families and ‘villages’ that collectively care for one another”; and fostering “a queer‐affirming network … with the intention of freeing ourselves from the tight grip of heteronormative thinking.”

It also officially supports “reproductive justice,” a euphemism for abortion. An estimated 40 percent of all U.S. abortions are sought by black women, meaning that Black Lives Matter supports the annual elimination of more than 344,800 black lives every year.

As for the claims that ignited this latest wave of BLM fervor, the Minnesota killing of George Floyd was instantly and unanimously condemned, and the police officers involved have been charged with murder. As to BLM’s broader claim of “systemic racism” in law enforcement, research actually shows that police are not disproportionately likely to use excessive lethal force against black suspects, but may in fact be less likely due to fear of racism claims.