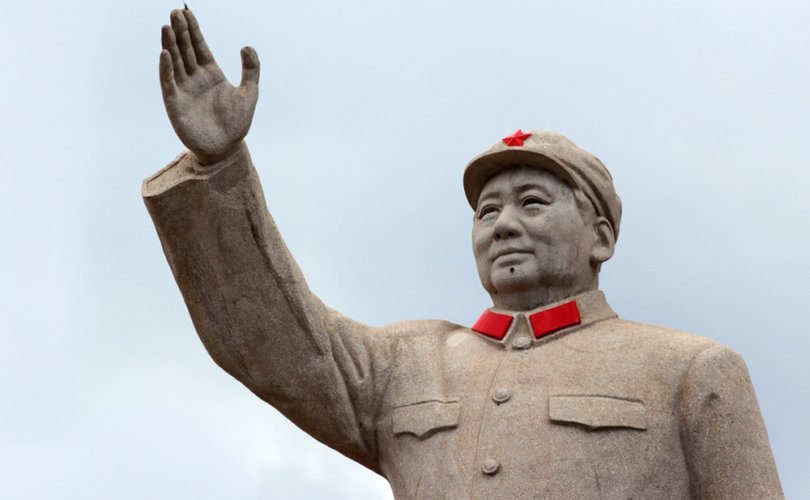 Apple Inc.’s Tim Cook went as far as praising the Communist country during his keynote speech at the conference, saying that China’s vision of cyberspace as promoted by the conference “is a vision we at Apple share.”

“The theme of this conference — developing a digital economy for openness and shared benefits — is a vision we at Apple share,” he said. “We are proud to have worked alongside many of our partners in China to help build a community that will join a common future in cyberspace.”

Bloomberg News reported that the appearance of leaders “from two of the world’s most valuable tech giants lends credibility to China’s efforts to influence the global internet so it better resembles its own.”

China has a notorious record of aggressively monitoring and censoring it’s citizens online.

“The World Internet Conference held in the eastern Chinese city of Wuzhen is meant to promote China’s vision of ‘cyber-sovereignty’ — the idea that governments all over the world should have the right to control what appears on the Internet in their countries,” wrote Simon Denyer in a Washington Post article.

“In practice, in China, that amounts to the largest system of censorship and digital surveillance in the world, where criticism of the Communist Party is sharply curtailed and can even land you in jail,” he continued.

“But that wasn’t mentioned when Cook delivered a keynote speech on the opening day of the gathering Sunday,” he added.

During his keynote address at the conference held December 3-5, Cook called for prospective internet and artificial intelligence (AI) technologies to include privacy, security and humanity.

That same day Wang Huning, a member of the Politburo Standing Committee — the seven-member group that rules China — called for more forceful government involvement online to battle terrorism and crime. He also called for control beyond China’s borders.

RELATED: President Obama’s Net Neutrality is a globalist tool for control. It must be repealed (Net Neutrality urges government regulation of the Internet and is strongly supported by both Google and Apple)

Google’s CEO Sundar Pichai did not give a keynote speech. Instead, he was on a panel to discuss the digital economy.

Free speech and human rights activists criticized the appearance of the tech giant CEOs at the conference.

“Cook’s appearance lends credibility to a state that aggressively censors the Internet, throws people in jail for being critical about social ills, and is building artificial intelligence systems that monitors everyone and targets dissent,” Maya Wang of Human Rights Watch in Hong Kong wrote.

“The version of cyberspace the Chinese government is building is a decidedly dystopian one, and I don’t think anyone would want to share in this ‘common future.’ Apple should have spoken out against it, not endorsed it,” Wang added.

Apple and Amazon have been previously criticized for giving into strict Internet censorship regulations in China, Breitbart reported in August.

Apple had acted to remove VPN and anti-censorship apps from its Chinese app store. Chinese citizens used the apps to get around China’s exceedingly restrictive Internet firewall, which blocks various U.S. websites such as Facebook.

Customers using Amazon’s Web Services in China were told to stop using any software allowing Chinese citizens to bypass the Chinese firewall or face cancellation of their services.

It is not surprising that big U.S. tech companies are sympathetic towards China’s vision for cyberspace given that they have been criticized for themselves censoring in the U.S., specifically pro-life and family messages.

Apple blocked a mobile pro-life app from its App Store in October after abortion supporters complained.

Google “review teams” were set up to flag what it deemed “upsetting-offensive” content in search results earlier this year, intending for “better” content to rank higher in the searches.

Google began censoring what it termed “hate speech,” “potentially controversial or offensive” videos, and “inflammatory religious or supremacist content” on its YouTube platform in August.

In May of this year, YouTube removed a video released by the Center for Medical Progress (CMP) that was shot undercover at an abortion conference.

In August, YouTube demonetized more than 900 videos published by prominent evangelical Dr. Michael Brown. The videos offered a conservative perspective on controversial issues, such as the LGBT movement.

Google refused to accept anti-abortion advertisements on its platforms despite allowing pro-abortion ads, until they were sued over the policy in 2008.

Back in 2011, a study conducted by the National Religious Broadcasters and the American Center for Law and Justice found social media platforms, including Apple, Google, and Facebook, were actively censoring Christian content.