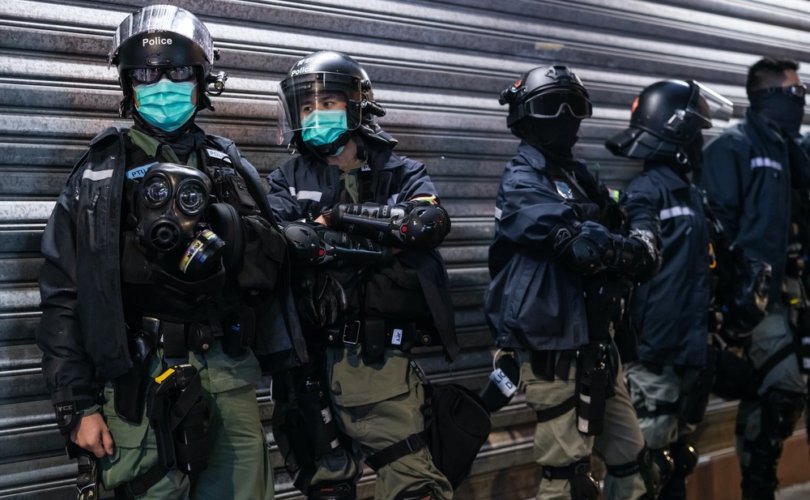 Police in Raleigh, North Carolina turned up at a protest to re-open the state and arrested one person. The city’s police department has come under fire for tweeting, “Protesting is a non-essential activity” (screenshot here), a statement many say flies in the face of the First Amendment. The department has since defended its tweet, saying it’s simply following orders.

April 16, 2020, 2:39 p.m. EST: Yesterday, in a stunning interview on Tucker Carlson Tonight, New Jersey Governor Phil Murphy admitted he “wasn’t thinking of the Bill of Rights” when he prohibited large gatherings of more than 50 people, including religious gatherings, in his state. He also claimed liquor stores are remaining open for “mental health” reasons.

April 16, 2020, 12:16 p.m. EST: A judge has ordered the McHenry County, Illinois, Health Department to provide police with the names of people who have tested positive for the coronavirus.

April 15, 2020, 9:29 p.m. EST: An NPR article on the protest in Michigan says the event “drew out militias, conservatives, small business owners, and ardent supporters of President Donald Trump, who characterize the Governor's stay-at-home order as an unjust power-grab.”

“At least 200 people broke the instructions of organizers, getting out of their cars to congregate around the steps of the capitol building, flouting social-distancing guidelines to remain 6-feet apart, and not wearing masks,” the liberal, taxpayer-funded outlet reported with a hint of contempt.

A quarter of Michigan’s workforce has now filed for unemployment.

The Sydney Morning Herald reports that in New South Wales, “Anyone…who leaves their house without a ‘reasonable excuse’ could spend up to six months in prison and face an $11,000 fine under an emergency ministerial directive” enacted at the end of March.

In the U.S., 43 percent of small businesses say they will have to permanently close within six months unless economic conditions improve.

In Ontario, a family was fined $880 for rollerblading in an empty parking lot.

And NBC reported April 8 that healthcare workers in Massachusetts, Alabama, Florida, and North Carolina are providing police with the addresses of people who have tested positive for the coronavirus. A LifeSiteNews article about this is forthcoming.

April 15, 2020, 8:42 P.M. EST: The first Catholic bishop in the U.S., Bishop Peter Baldacchino of Las Cruces, New Mexico, has reinstated public Masses, provided they follow government health directives that allow only a total of five people in a church during Mass. Outdoor Masses can have more people than that, provided people stand six feet apart.

There is increasing confidence that COVID-19 likely originated in a Wuhan laboratory not as a bioweapon, but as part of China's effort to demonstrate that its efforts to identify and combat viruses are equal to or greater than the capabilities of the United States, multiple sources who have been briefed on the details of early actions by China's government and seen relevant materials tell Fox News.

This may be the “costliest government coverup of all time,” one of the sources said.

The sources believe the initial transmission of the virus was bat-to-human, and that “patient zero” worked at the laboratory, then went into the population in Wuhan.

Documents detail early efforts by doctors at the lab and early efforts at containment. The Wuhan wet market initially identified as a possible point of origin never sold bats, and the sources tell Fox News that blaming the wet market was an effort by China to deflect blame from the laboratory, along with the country's propaganda efforts targeting the U.S. and Italy.

U.S. Embassy officials warned in January 2018 about inadequate safety at the Wuhan Institute of Virology lab and passed on information about scientists conducting risky research on coronavirus from bats, The Washington Post reported Tuesday.

April 15, 2020, 4:25 p.m. EST: Breitbart has released videos showing a “vehicle protest” in Michigan demanding the state be reopened. Its Democrat governor has imposed some of the most draconian measures in the country.

April 15, 2020 (LifeSiteNews) – Over Easter weekend, there was no shortage of coronavirus news and no shortage of clashes between the state and Americans trying to exercise their constitutionally protected rights.

In a scathing opinion on Saturday, Judge Justin Walker of the United States District Court for the Western District of Kentucky granted a temporary restraining order allowing On Fire Christian Church to hold a “drive-in” Easter worship service in a parking lot.

“On Holy Thursday, an American mayor criminalized the communal celebration of Easter,” Walker wrote. “That sentence is one that this Court never expected to see outside the pages of a dystopian novel, or perhaps the pages of The Onion.”

By prohibiting drive-in worship services, Walker stressed, “Louisville has targeted religious worship … while not prohibiting a multitude of other non-religious drive-ins and drive-throughs – including, for example, drive-through liquor stores. Moreover, Louisville has not prohibited parking in parking lots more broadly – including, again, the parking lots of liquor stores.”

On Holy Saturday, the Kansas Supreme Court met by video and sided with the state’s Governor Laura Kelly, a Democrat, who had banned church services of more than 10 people.

Last night, President Trump announced he is freezing funding to the World Health Organization while the U.N. entity’s “role in severely mismanaging and covering up the spread of the coronavirus” is studied.

On Monday, during his daily coronavirus briefing, Trump blasted the media for being “so fake” and showed a video highlighting the media’s early downplaying of the threat of the virus. After initially mocking Trump for touting hydroxychloroquine as an effective coronavirus treatment, the media and Democrat governors seem to have begun acknowledging its value. They seem to be doing their best not to give any credit to Trump.

The U.K.’s National Health Service (NHS) has been criticized for a “coronavirus scoring system” that discriminates against disabled patients.

A story many Catholics have found touching is one of a prison chaplain in Canada who, rather than abandon his flock, volunteered to be incarcerated along with them.

An army field hospital that was set up in Seattle to help coronavirus patients left after nine days and not seeing a single patient.

The Victims of Communism Memorial Foundation has produced an analysis and timeline of the Chinese Communist Party’s lies to the world about the coronavirus and how it has used the World Health Organization “as an instrument of propaganda.”

Michigan Governor Gretchen Whitmer – who has forbidden stores in her state from selling vegetable seeds during the pandemic – has revised her “stay-at-home” order to clarify that pro-lifers are still allowed to engage in First Amendment activity protesting abortion.

Other recent LifeSiteNews coverage of the coronavirus crisis includes:

And stories relating to the coronavirus crisis and the Catholic Church include: