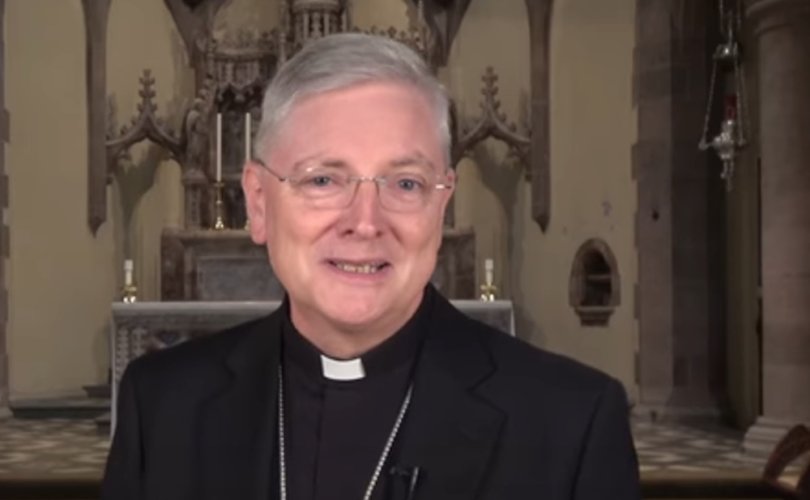 EDINBURGH, Scotland, July 30, 2019 (LifeSiteNews) – A Scottish archbishop is asking Catholics to write to their local representatives to vote against a motion that would strip the Catholic Church of its ability to influence her own schools.

A letter from Archbishop Leo Cushley was read from the pulpits of Edinburgh’s Catholic churches during Sunday masses this past weekend.

“You will know by now that the Green Party have put forward a motion to be discussed by the City of Edinburgh Council on 22 August 2019 in which they propose to remove the voting rights of Church representatives on the Council’s Education Committee,” Cushley wrote.

“Such a move, if passed, would effectively remove from the Church the ability to influence the running and direction of our Catholic Schools,” he continued.

“As such, this motion presents a serious threat to the identity and Catholicity of our schools in Edinburgh and is also, in all probability, just a first step in a process to remove faith education from schools in Scotland altogether.”

Cushley stated that the motion “cast into doubt” the commitment of Edinburgh’s elected representatives to the future of Catholic schools.

He encouraged Edinburgh’s Catholics, therefore, to write to their council representatives and ask them to vote against the proposal, so that the city’s 18 Catholic schools may “continue to flourish.”

This is not the Green Party’s first attack on Scotland’s Catholic schools. According to the Scottish Catholic Observer, the Greens’ John Finnie, MSP (Member of Scottish Parliament) submitted proposals in 2014 to Scotland’s government that would remove “the statutory obligation on councils to appoint religious representatives to education committees and remove voting rights from unelected members of all council committees, as well as making other provisions regarding how councils conduct their proceedings.”

Although it has been dropped from its manifesto, it is still Green Party policy to work for the end of Catholic public education in Scotland. Officially, it wants to abolish any religious instruction in schools beyond “a celebration and recognition of religious and cultural diversity and spirituality.”

“No publicly-funded school shall be run by a religious organisation. Schools may teach about religions, comparing examples which originated in each continent, but are prohibited from delivering religious instruction in any form or encouraging adherence to any particular religious belief,” the Greens’ Manifesto on “Faith Schools” declares.

The Scottish Greens also wish to enforce LGBT ideology on all of Scotland’s schools, saying: “Opt-outs from equality and diversity legislation will not be allowed for faith schools and they will not be permitted to promote homophobia or transphobia on the grounds of religion.”

Systematic discrimination against Catholics from 1920s until 1980s

There has been publicly-funded Catholic education in Scotland for a century, for the 1918 Education (Scotland) Act brought Catholic schooling into the state system. According to historian Tom Devine, this was done in a period of good-will between the Protestant ruling classes and the largely Irish-descended Catholic population “to avoid the creation of a pariah class that was less than adequate for the labour market.”

According to the Archdiocese of St. Andrews and Edinburgh, this law permitted the country’s 224 Catholic schools, serving 94,000 pupils, to retain their distinct religious character in both staffing and curriculum. It began a joint partnership between local Catholic communities and their local authorities to provide Catholic education.

Unfortunately, it was not all smooth sailing for the Catholic community after that. A systematic discrimination against Catholics in the workplace was practiced in Scotland from the 1920s until the 1980s when control of the country’s businesses shifted from the Scottish elite to the multinationals. This marginalization of Catholics for their Irish descent and/or their faith was famously described by the composer Sir James MacMillian in 1999 as “Scotland’s Shame.”

Eileen Rafferty, religious education adviser to schools for the Archdiocese, said: “It is only reasonable that Catholic reps vote when it comes to decisions affecting Catholic education and Catholic schools. The vast majority of our reps across the Lothians and Fife are not clergy but parents and/or educationalists with rich experience in Catholic education. It is their voice that is determinedly silenced by this proposal.”

A spokesman for the Scottish Greens told LifeSiteNews via email that only elected local councillors should be allowed to vote on education committees.

“Council education committees take decisions on behalf of all of the children – and adults – in their communities,” he wrote.

“It is essential that anyone with voting rights on such a committee has a democratic mandate and clear accountability to their community. Elected local councillors are the only people who meet both of these criteria,” he continued.

“No-one would suggest unelected representatives of specific denominations be given voting rights in the Scottish Parliament. Greens believe the same democratic accountability should apply to our council chambers. Anyone, of any faith, who wishes a say in our system of government has the right to do so through the democratic process of standing for election.”

Edinburgh Secular Society: ‘The Roman Catholic Church in Scotland is an outpost of a foreign power’

In 2014 the Edinburgh Secular Society deeply offended Catholics when it made a similar proposal to the Scotland’s Holyrood government, but using language reminiscent of the worst of Scotland’s sectarian period.

“The Roman Catholic Church in Scotland is an outpost of a foreign power based in Rome which is recognised in many aspects of international relations as an independent state,” the Edinburgh Secular Society stated in its official intervention.

“The hierarchy of the Church of Rome in Scotland, which makes the appointment of one member of each local authority education committee on the mainland, is itself appointed and disciplined by, as well as being accountable to, the overseas hierarchy of the Church. Why should the educational policy of every mainland local authority in Scotland be subject to potential influence by appointees who are nominated by a representative of a foreign power?”

It then added a contemporary twist, suggesting that Catholics are still dangerous heretics:

“Some of the doctrines and practices of that Roman Catholic Church also run counter to the equal opportunity policies of the Scottish Parliament and the Scottish Government, which stress that there should be full equality of gender opportunity. The Church excludes women from the priesthood and from the hierarchy of the Church. While it may be lawful for Churches to practise such discriminatory procedures because they have managed to prevent equal opportunity laws applying to them, the acceptance of the arrangements whereby Churches can nominate members to local authority education committees is a direct affront to core public values in contemporary Scotland that are espoused by most local authorities in Scotland, the Scottish Parliament and the Scottish Government.”