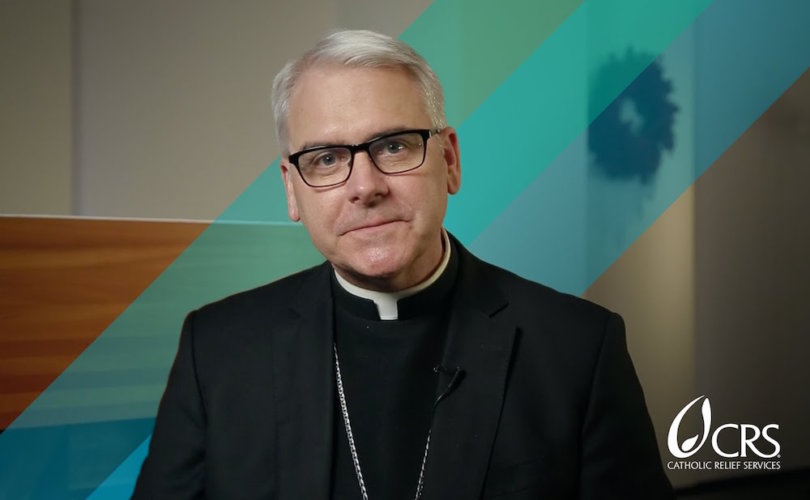 BALTIMORE, Maryland, November 14, 2016 (LifeSiteNews) – The Chairman of the Board of Catholic Relief Services (CRS) asked U.S. bishops today to “not give credence to” reports the Lepanto Institute has released about its programs that are in contradiction with Church teaching.

Outgoing CRS President Carolyn Woo cried on stage at the U.S. Conference of Catholic Bishops' fall 2016 meeting as she said her time leading the organization showed her evil was “no longer abstract to me.”

She said the “most chilling statement I ever heard” was “Carolyn, we can’t compromise.”

Coakley then said that as Woo spoke, he received an email from the Lepanto Institute. He called this “bitter irony.”

“I hope you will not give credence to the…allegations of this particular blogger,” said Coakley.

According to Lepanto Institute's most recent report, CRS facilitated the distribution of more than two million units of various types of contraception, including abortifacients, in the Democratic Republic of Congo over the course of four years. Coakley released a pre-emptive statement criticizing the report.

Today, the Lepanto Institute's Michael Hichborn released an open letter to the U.S. bishops addressing claims CRS made in response to its latest report. CRS has previously said its critics are “prevailing.”

“CRS is asking Your Eminences and Excellencies, and all the faithful, to ignore four years’ worth of inventory and narrative reports that show CRS intimately involved in the distribution of millions of units of abortifacient contraception and condoms,” wrote Hichborn. “CRS is asking that the written testimony of the head of IMA World Health suffices as refutation to the evidence.  It should be noted that IMA’s current head wasn’t even working for IMA World Health while the project in question was being implemented.”

“CRS put forth two identical letters, clearly written by CRS, from the Bishops’ Conferences of Kenya and the Democratic Republic of Congo to support the assertion that the Lepanto Institute’s report is wrong,” Hichborn continued. “These letters were obtained weeks before the Lepanto Institute report was even published.”

Responding to Archbishop Coakley's remarks at the meeting, Hichborn told LifeSiteNews, “Unfortunately, Archbishop Coakley displayed the clericalism that Pope Francis so recently condemned. Either the faithful are capable of interpreting the Magisterial teachings of the Church, or we are not. The choice is between the Springtime of Evangelization, or the 'Catholic Spring.' It is either John Paul II or John Podesta. Choose!”