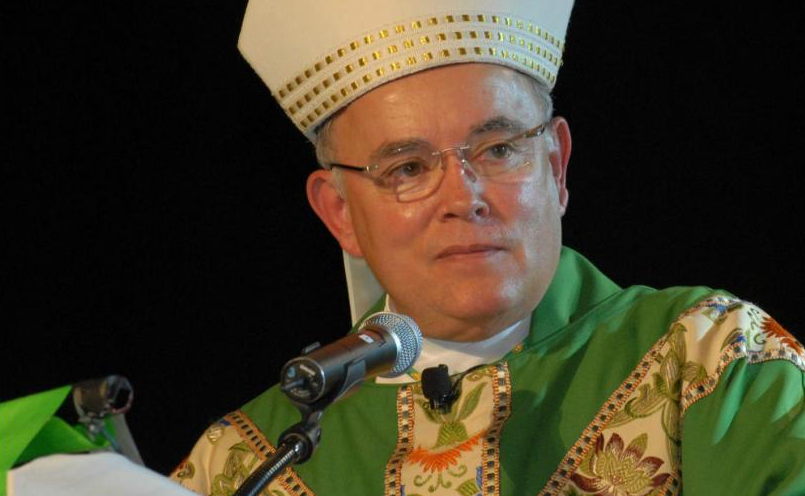 VATICAN CITY, October 4, 2018 (LifeSiteNews) — Archbishop Charles Chaput of Philadelphia today told Pope Francis and members of the Synod of Bishops that “LGBTQ” and other similar language should not be used in the Vatican Youth Synod document.

In his intervention this morning on the floor of the Vatican’s Synod Hall (see full text below), Archbishop Chaput said: “There is no such thing as an ‘LGBTQ Catholic’ or a ‘transgender Catholic’ or a ‘heterosexual Catholic,’ as if our sexual appetites defined who we are; as if these designations described discrete communities of differing but equal integrity within the real ecclesial community, the body of Jesus Christ.”

“This has never been true in the life of the Church, and is not true now,” Chaput told the Pope, cardinals, bishops and young people convened in the Synod Hall. “It follows that ‘LGBTQ’ and similar language should not be used in Church documents, because using it suggests that these are real, autonomous groups, and the Church simply doesn’t categorize people that way.”

At an Oct. 1 Vatican press conference, LifeSiteNews reminded Cardinal Baldisseri that he had initially claimed the phrase “LGBT youth” was a quote taken from a pre-synodal document compiled by young people at their meeting with the Pope and Synod organizers, March 19-24, 2018.

We told Baldisseri that we had looked at the final document compiled by young people, and the acronym “LGBT” appears nowhere.

“Look, I am not removing anything,” Cardinal Baldisseri responded. “The Synod Fathers will discuss it article by article. All the texts, even the loftiest in the world, will be discussed.”

Why should we use “LGBT” or “LGBTQ” in the church? Because people have a right to name themselves, and this is the name many choose. And there is such a “thing” as an “LGBTQ Catholic” and a “transgender catholic.” They are members of the Body of Christ. https://t.co/7OWDayKUbk

No specific mention of Archbishop Chaput’s intervention was made at the synod press briefing today.

Father Thomas Rosica, the English language media attaché to the synod, who spoke with journalists after the briefing, also made no mention of Chaput’s remarks.

Asked if “homosexuality” and “gay relationships” were part of the interventions, Father Rosica replied: “Not those exact words, the issue was present, but there wasn’t any dominant issue.”

Father Rosica did confirm that sexual abuse was raised in several interventions. “The sex abuse issue has affected young people, and they want clarity, transparency, authenticity from us.”

Here below is the full text of Archbishop Chaput's intervention at the Synod.

I was elected to the synod’s permanent council three years ago.  At the time, I was asked, along with other members, to suggest themes for this synod.  My counsel then was to focus on Psalm 8.  We all know the text: “When I look at thy heavens, the work of thy fingers, the moon and the stars which thou hast established; what is man that thou art mindful of him, and the son of man that thou dost care for him?”

Who we are as creatures, what it means to be human, why we should imagine we have any special dignity at all – these are the chronic questions behind all our anxieties and conflicts.  And the answer to all of them will not be found in ideologies or the social sciences, but only in the person of Jesus Christ, redeemer of man. Which of course means we need to understand, at the deepest level, why we need to be redeemed in the first place.

If we lack the confidence to preach Jesus Christ without hesitation or excuses to every generation, especially to the young, then the Church is just another purveyor of ethical pieties the world doesn’t need.

In this light, I read Chapter IV of the instrumentum, grafs 51-63, with keen interest.  The chapter does a good job of describing the anthropological and cultural challenges facing our young people.  In fact, describing today’s problems, and noting the need to accompany young people as they face those problems, are strengths of the instrumentum overall.  But I believe graf 51 is misleading when it speaks of young people as the “watchmen and seismographs of every age.”  This is false flattery, and it masks a loss of adult trust in the continuing beauty and power of the beliefs we have received.

In reality, young people are too often products of the age, shaped in part by the words, the love, the confidence, and the witness of their parents and teachers, but more profoundly today by a culture that is both deeply appealing and essentially atheist.

The elders of the faith community have the task of passing the truth of the Gospel from age to age, undamaged by compromise or deformation.  Yet too often my generation of leaders, in our families and in the Church, has abdicated that responsibility out of a combination of ignorance, cowardice and laziness in forming young people to carry the faith into the future.  Shaping young lives is hard work in the face of a hostile culture.  The clergy sexual abuse crisis is precisely a result of the self-indulgence and confusion introduced into the Church in my lifetime, even among those tasked with teaching and leading.  And minors – our young people – have paid the price for it.

Finally, what the Church holds to be true about human sexuality is not a stumbling block.  It is the only real path to joy and wholeness.  There is no such thing as an “LGBTQ Catholic” or a “transgender Catholic” or a “heterosexual Catholic,” as if our sexual appetites defined who we are; as if these designations described discrete communities of differing but equal integrity within the real ecclesial community, the body of Jesus Christ. This has never been true in the life of the Church, and is not true now.  It follows that “LGBTQ” and similar language should not be used in Church documents, because using it suggests that these are real, autonomous groups, and the Church simply doesn’t categorize people that way.

Explaining why Catholic teaching about human sexuality is true, and why it’s ennobling and merciful, seems crucial to any discussion of anthropological issues.  Yet it’s regrettably missing from this chapter and this document. I hope revisions by the Synod Fathers can address that.