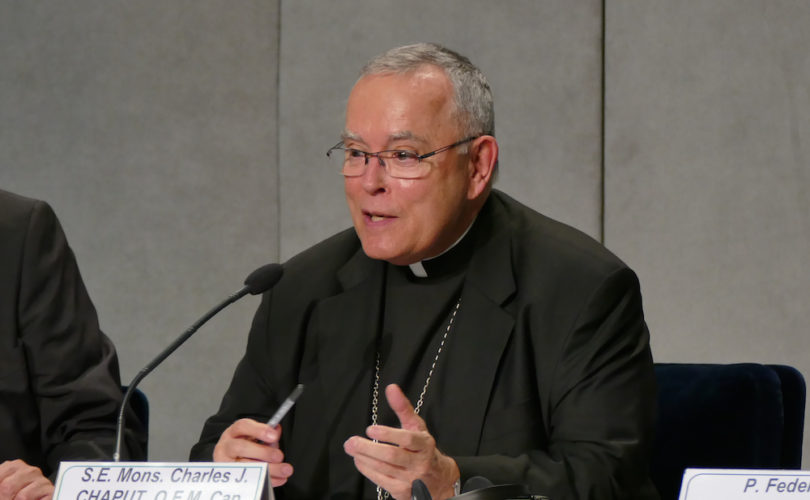 “Anything less” than upholding the Catholic Church’s traditional teaching on the indissolubility of marriage and thus the adulterous nature of second unions “misleads people about the nature of the Eucharist and the Church,” Chaput wrote.

Amoris Laetitia seems to contradict longstanding Church teaching on the subject of admitting to the Sacraments the divorced and civilly remarried. The document, which was released after two contentious synods on the family, seemingly opened the door for those living unrepentantly in relationships the Church labels objectively sinful to receive the Sacraments in certain circumstances.

But Chaput, who is part of a committee overseeing the exhortation’s implementation in the United States, wrote that Amoris Laetitia should “be read in continuity with the great treasury of wisdom handed on by the Fathers and Doctors of the Church, the witness of the lives of the Saints, the teachings of Church Councils, and previous magisterial documents.”

“As with all magisterial documents, Amoris Laetitia is best understood when read within the tradition of the Church’s teaching and life,” Chaput’s guidelines declare.

“Catholic belief, rooted in Scripture, reserves all expressions of sexual intimacy to a man and a woman covenanted to each other in a valid marriage,” wrote Chaput. “We hold this teaching to be true and unchangeable, tied as it is to our nature and purpose as children of a loving God who desires our happiness.”

Chaput’s instructions make it clear that individuals living according to the Church’s teachings on human sexuality despite having entered an invalid second “marriage” may receive the Sacraments. In administering the Sacraments to such individuals, Chaput wrote, priests must take care to avoid committing scandal by seemingly indicating approval of behaviors condemned by the Church.

With divorced and civilly-remarried persons, Church teaching requires them to refrain from sexual intimacy. This applies even if they must (for the care of their children) continue to live under one roof. Undertaking to live as brother and sister is necessary for the divorced and civilly-remarried to receive reconciliation in the Sacrament of Penance, which could then open the way to the Eucharist. Such individuals are encouraged to approach the Sacrament of Penance regularly, having recourse to God’s great mercy in that sacrament if they fail in chastity.

Even where, for the sake of their children, they live under one roof in chaste continence and have received absolution (so that they are free from personal sin), the unhappy fact remains that, objectively speaking, their public state and condition of life in the new relationship are contrary to Christ’s teaching against divorce. Concretely speaking, therefore, where pastors give Communion to divorced and remarried persons trying to live chastely, they should do so in a manner that will avoid giving scandal or implying that Christ’s teaching can be set aside. In other contexts, also, care must be taken to avoid the unintended appearance of an endorsement of divorce and civil remarriage; thus, divorced and civilly remarried persons should not hold positions of responsibility in a parish (e.g. on a parish council), nor should they carry out liturgical ministries or functions (e.g., lector, extraordinary minister of Holy Communion).

Chaput’s directives and reasoning are in line with the Church’s historic teaching that Pope St. John Paul II articulated in his exhortation Familiaris Consortio:

Chaput also wrote that unmarried cohabitating couples must either separate before marriage or cease sexual intimacy until they are married in the Church. If the couple already has children, it may be best for them to remain living together until marriage for the sake of their children, Chaput wrote, but such couples must not be sexually active until they are validly married.

Chaput’s guidelines also addressed the need to provide authentic pastoral care to those with same-sex attraction.

Chaput’s new guidelines acknowledge that there may be same-sex couples who “live together in chaste friendship and without sexual intimacy,” and encourages pastors to handle such situations with prudence. The archbishop’s guidelines warned that any seeming acceptance of the homosexual lifestyle undermines the Catholic faith and “can only produce moral confusion in the community.”

“Two persons in an active, public same-sex relationship, no matter how sincere, offer a serious counter-witness to Catholic belief, which can only produce moral confusion in the community,” wrote Chaput. “Such a relationship cannot be accepted into the life of the parish without undermining the faith of the community, most notably the children…those living openly same-sex lifestyles should not hold positions of responsibility in a parish, nor should they carry out any liturgical ministry or function.”

Meanwhile, the German Catholic bishops’ conference allows Church employees to openly defy and act contrary to the teachings and beliefs of the Church. In April, three German bishops claimed that Amoris Laetitia allows for Communion for the divorced and civilly remarried on a case-by-case basis.

And Cardinal Christoph Schönborn, who Pope Francis chose to present Amoris Laetitia at the document’s debut, has said that he allows the divorced and civilly remarried to receive the Sacraments in some circumstances. Schönborn is the Archbishop of Vienna.

Pope Francis recently stirred up a storm by claiming that the “great majority” of Christian marriages are invalid, yet many couples who cohabitate partake in the grace of the sacrament of marriage.