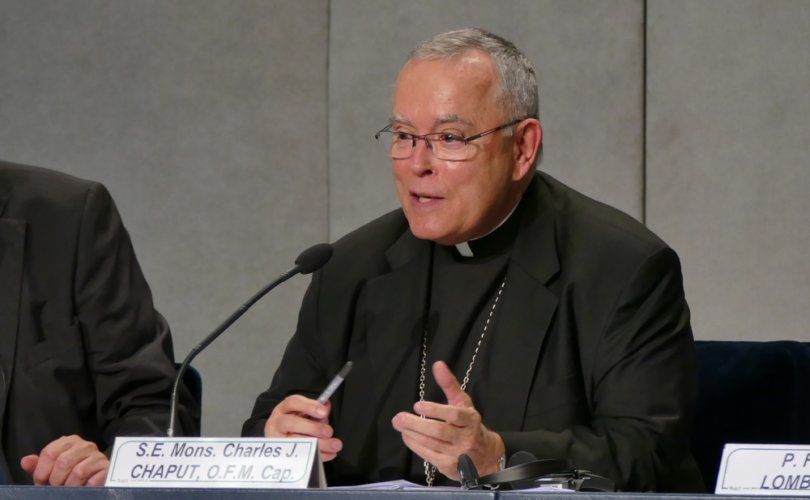 The Humanae Vitae at 50 Declaration affirms the teachings in Blessed Pope Paul VI’s landmark encyclical on contraception and human life and offers commitment “to the fullness of its truth and natural beauty.”

The archbishop agreed to lend his name to the declaration Wednesday, LifeSiteNews has learned.

The declaration in support of Humanae Vitae is being circulated throughout the Philadelphia archdiocese for clergy and laity to sign either via a hard copy form or on-line.

Some 700 priests and 200 deacons in the Philadelphia archdiocese will be invited to sign the declaration, and also to consider giving a homily supporting Humanae Vitae at Masses this upcoming July 21-22 weekend, and to include information on Humanae Vitae in Mass announcements and bulletin inserts.

“We are grateful that Archbishop Chaput is one of the signatories,” said Steve Bozza, Director of the Archdiocese of Philadelphia’s Office for Life and Family.

The declaration mirrors a current one from the Confraternity of Catholic Clergy in the United States available for U.S. clergy to sign in support of  HV. Some 500 priests in the U.K. signed a statement in June upholding the teachings of the document. Two hundred young lay Catholics from the United Kingdom signed a letter in support of Humanae Vitae in July as well.

Partnering with grassroots pro-life groups in the area, the archdiocese is part of a comprehensive ongoing effort to raise awareness on HV in its 50th anniversary year.

“Our objectives are to show courage in order to encourage others,” said Tim Murnane, one of the initiative’s organizers. “We would like to create HV evangelizers, those that will speak up to defend HV’s teaching as the best path for happiness in family life.”

“It could change the course of our cultural decline,” Murnane told LifeSiteNews. “Our website therefore has a collection of resources to do that.”

Murnane is Chairman of the Regina Academies in Philadelphia, a group of classical education institutions. The Academies are partners in the Humanae Vitae initiative, along with the Knights of the Immaculata, a Marian evangelization movement, West Chester pro-life group Generation Life, and some dozen-plus other groups.

The partnering groups worked with Bozza and Philadelphia Auxiliary Bishop John McIntyre on the initiative’s documents to assure the right protocols, and Murnane said they are excited at the prospects going forward of working with the archdiocese on the campaign.

The HV50 initiative began with a conference organized in May by the coalition with author Mary Eberstadt and evangelist Christopher West as featured speakers. It continues with another HV conference being held in Philadelphia in October with Dr. Janet Smith as a key speaker. The second conference is sponsored by the archdiocese with the partner groups’ assistance.

Next week on the actual anniversary date for HV of July 25, the coalition is sponsoring the showing of the movie “Sexual Revolution – 50 Years Since Humanae Vitae.” The groups will also invite attendees at that event to aid the initiative in any way that they can.

Humanae Vitae was promulgated July 25, 1968. Many in and outside the Catholic Church rebelled against the Church’s teaching on contraception before and throughout the document’s release, and continue to do so.

“In this encyclical, the Holy Father wrote of the beauty and power of married love, which is not only fully human, but also very much divine in that a husband and wife share in God’s power to bring forth new human lives,” Bozza wrote in a statement on the archdiocese’s participation in the HV50 initiative. “He also warned the world of the dangers the use of contraception present to women, the family and the society at large.”

The Humanae Vitae at 50 Declaration makes note of Paul VI’s prediction that should society ignore God’s plan for marital love and the transmission of human life through the use of contraception, it would result in an increase in marital infidelity, a general lowering of morality, a growing disrespect for women and coercive measures by governments to impose contraception on their citizens.

“Contraception distorts the great gift of our sexuality and leads us to objectify those we claim to love,” the declaration states. “The contraceptive mentality is inherently flawed because it convinces us that we, not God, are the authors of human life. We become self-absorbed by pursuing our desires instead of God's will for our lives.”

“By changing the nature of the conjugal act, contraception strips the marital act of its beautiful procreative purpose,” it further says, “and therefore deeply offends God.”

“By contradicting God's plan that links conjugal love to procreation,” it says as well, “contraception has become the root of the Culture of Death.”

Murnane pointed out the telling message contained in section 22 of Chaput’s 1998 pastoral letter on Humanae Vitae:

The irony is that the people who dismissed Church teaching in the 1960s soon discovered that they had subverted their own ability to pass anything along to their children. The result is that the Church now must evangelize a world of their children's children — adolescents and young adults raised in moral confusion, often unaware of their own moral heritage, who hunger for meaning, community, and love with real substance.

“This is what we call a ‘teaching moment’,” Zaleski said. “This is an opportunity to teach a new generation what God intends with respect to a married couple’s primordial privilege – to co-create human life with Him that is destined to live for all eternity.”

Archbishop Chaput has been a defender of Humanae Vitae, speaking about the prophetic document this past April at the Catholic University of America, saying that the truth about the dignity of human life, the nature of the human person, the beauty of marriage, and the purpose of human sexuality had not changed.

Chaput also spoke out about the significance of HV in his column last June as the document’s 49th anniversary approached.

“Humanae Vitae remains a powerful counter-witness to the widespread sexual dysfunction of our age,” Archbishop Chaput wrote, “as other Christian communities, and even many Catholics, have collapsed in their defense of sexual integrity. Humanae Vitae has remained a testimony to the truth.”

The HV50 Declaration can be found HERE, with general information about the campaign HERE. Resources on the HV50 Initiative are available HERE.