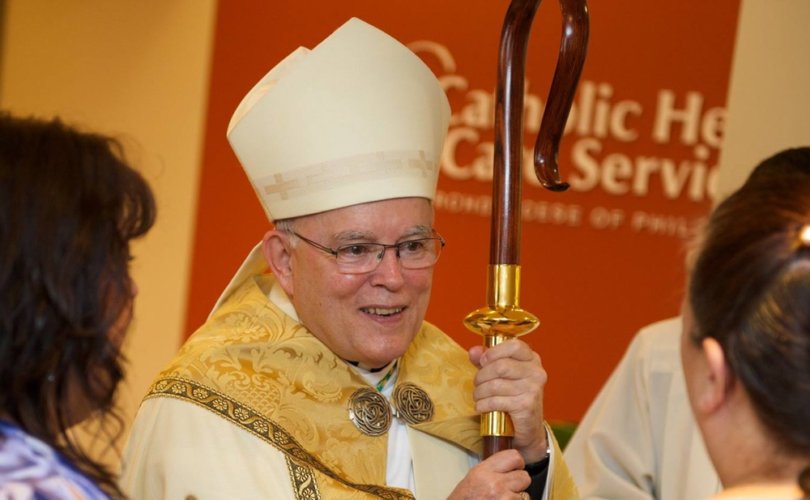 PHILADELPHIA, Pennsylvania, September 19, 2019 (LifeSiteNews) – In a statement challenging pro-LGBT Jesuit Father James Martin and bishops who support him, Archbishop Charles Chaput, O.F.M. Cap. warned his diocese – and by extension the entire Catholic Church – “regarding the ambiguity about same-sex related issues found throughout the statements and activities of Father James Martin.”

The Philadelphia prelate was moved to speak out after Martin delivered a lecture based on his controversial book, Building A Bridge, in his diocese at St. Joseph’s University.

Chaput’s statement is being widely circulated.

“A pattern of ambiguity in his teachings tends to undermine his stated aims, alienating people from the very support they need for authentic human flourishing,” said Chaput. “Due to the confusion caused by his statements and activities regarding same-sex related (LGBT) issues, I find it necessary to emphasize that Father Martin does not speak with authority on behalf of the Church, and to caution the faithful about some of his claims.”

Bishop Thomas Paprocki of the Diocese of Springfield, Illinois quickly issued a statement supporting Chaput, saying that aspects of Martin’s teachings are “deeply scandalous,” and his “messages create confusion among the faithful and disrupt the unity of the Church.”

Chaput asserts that Martin’s encouragement to Catholics who experience same-sex attraction to identify as “gay” or “transgender” is “the opposite of the Gospel’s clear teaching that our identity is found in Jesus Christ, created in the image and likeness of God and called to be sons and daughters of God.”

While at times going out of his way to commend and compliment the Jesuit, Chaput offered a concise and systematic five-point condemnation of the most egregious components of Martin’s pro-LGBT message:

Chaput noted that although Martin claims that he has never challenged Church teachings, “what is implied or omitted often speaks as loudly as what is actually stated, and in the current climate, incomplete truths do, in fact, present a challenge to faithful Catholic belief.”

When people hear that “the Church welcomes gay people” or needs to be more “inclusive and welcoming” without also hearing the conditions of an authentically Christian life set for all persons by Jesus Christ and his Church — namely, living a life of chastity — they can easily misunderstand the nature of Christian conversion and discipleship.

For this reason, Catholic teaching always requires more than polite affirmation or pro forma agreement, particularly from those who comment publicly on matters of doctrine. Faithful Catholics who are same-sex attracted need support and encouragement in the virtue of chastity.  They deserve to hear — as all people do — the truth about human sexuality spoken clearly and confidently. Anything less lacks both mercy and justice.

In response to Chaput’s criticism, Fr. Martin took to social media to justify the message he has been presenting over the last few years.

Martin attempted to crush Chaput’s criticism by claiming the blessing of a higher authority than that of an archbishop: Pope Francis.

“The lecture at St. Joseph's University this week, which prompted your article, is the same lecture that I presented at the World Meeting of Families in Dublin last year, the text of which was vetted and approved beforehand by the Vatican.”

“What I am trying to do … is encourage Catholics to see LGBT people as more than just sexual beings, to see them in their totality,” said Martin, overlooking the fact that his message accomplishes the opposite, firmly entrenching the same-sex attracted in gay, lesbian, bisexual, or transgender identities and reducing them to the sum of their sexual attractions.

“Father Martin correctly expresses God’s love for all people, while on the other, he either encourages or fails to correct behavior that separates a person from that very love,” said Bishop Paprocki in his statement. “This is deeply scandalous in the sense of leading people to believe that wrongful behavior is not sinful.”

“Father Martin’s public messages create confusion among the faithful and disrupt the unity of the Church by promoting a false sense that immoral sexual behavior is acceptable under God’s law,” said Paprocki. “People with same-sex attraction are indeed created and loved by God and are welcome in the Catholic Church. But the Church’s mission to these brothers and sisters is the same as to all her faithful: to guide, encourage, and support each of us in the Christian struggle for virtue, sanctification, and purity.”