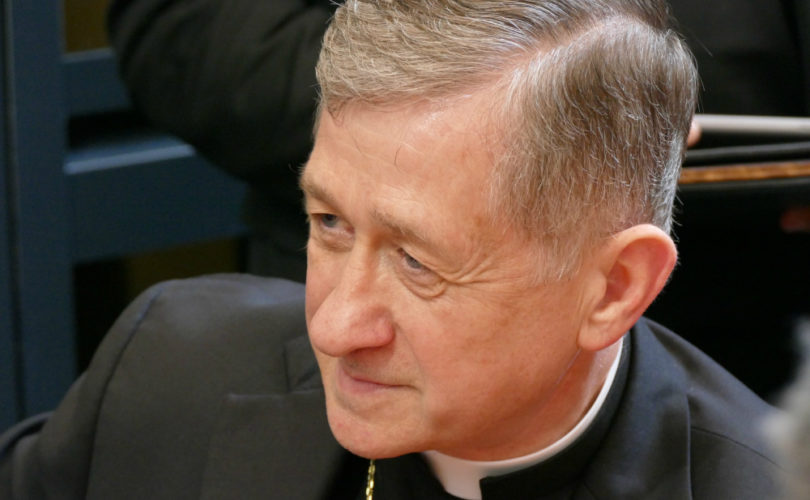 CHICAGO, December 11, 2015 (LifeSiteNews) – Chicago Archbishop Blase Cupich has proved himself again the leading American exponent of the German school of theology, telling an ABC interviewer that it was up to divorced and remarried Catholics and homosexuals to decide for themselves if they took Holy Communion, not their priests or bishops.

The archbishop also reaffirmed his general opposition to Canon 915 of the Code of Canon Law, which requires ministers of the Eucharist to withhold Communion from those who are “obstinately persevering in manifest grave sin.” The canon has been relevant most prominently in relation to pro-abortion Catholic politicians.

Cupich first outlined his views on Communion for active homosexuals at a press conference during the recent Synod where he insisted such matters were for the individual to decide using his or her own conscience.

Now, back from that event, he told Alex Krashesky of ABC Eyewitness News the same thing, modifying his previous remarks only slightly to reflect conditions attached to the Synod’s Final Report – that every person’s conscience must be formed “according to the teaching of the Church.”

Krashesky asked for an explanation of the archbishop’s comments during the Synod. Cupich responded, “We expressed an aspiration that people who are stuck in a system who need to be reconciled to the Church … might have another opportunity to have their case considered through what we would call an internal forum rather than the external forum of the annulment process. That was presented to the Holy Father. The mechanism for that has not been defined yet.”

When asked if the same “internal forum” could be used to secure Communion for sexually active homosexuals, he said that it could.  “When people who are in good conscience working with a spiritual director come to a decision, then they need to follow that conscience. That’s the teaching of the Church. So in the case of people receiving Communion in situations that are irregular that also applies. The question then was: Does that apply to gay people? My answer was: they’re human beings too. They have a conscience. Thy have to follow their conscience.”

He continued: “They have to be able to have a formed conscience, understand the teaching of the Church, and work with a spiritual director and come to those decisions. And we have to respect that.”

“It’s not up to any minister who is distributing the Eucharist to make a decision about a person’s worthiness or lack of worthiness. That’s on the conscience of those individuals,” he added.

George Weigel, in a 6,000-word account of the Synod in First Things, presents the “internal forum” idea as a last-minute, face-saving effort by the German party to get something in the Final Report of their hoped-for rapprochement with the sexual revolution. In the main, said Weigel, “the Relatio Finalis affirms that there can be no wedge driven here between ‘doctrine’ and ‘pastoral practice’… In other words, worthiness to receive Holy Communion is a matter of living in the truth.”

But the Synod had to vote down three arguments from the Germans. The first was that as long as lip service was paid to the doctrine that marriage was indissoluble, the Church could give permission to those openly flouting it through remarriage or homosexuality to take Communion. This, noted Weigel, was demolished in the introductory remarks of Cardinal Peter Erdo of Hungary, who declared it utterly inconsistent with what the Gospels, St. Paul, and the teachings of recent Popes, especially John Paul II’s Familiaris Consortio, all taught about marriage. Those in irregular marriages could stay in them for the sake of their children, but could be admitted to Communion only if they committed to refrain from sexual relations.

Then the Germans tried what Weigel dubbed “Plan B”: this was “local option Catholicism,” whereby each national church would decide the matter for itself. This was rejected as an anti-Catholic absurdity, said Weigel. “Plan C” is recognizable as Cupich’s basic premise: that conscience is supreme, “as acknowledged by Vatican II in its Declaration on Religious Freedom, Dignitatis Humanae.” But opponents led by Toronto’s Cardinal Thomas Collins quickly countered, in Weigel’s words, that “The Catholic Church (and Dignitatis Humanae) had never considered ‘conscience’ a free-floating faculty of choice detached from religious and moral truth.” Plan C too was voted down.

The last resort Weigel calls “Plan D” – to leave the matter to be resolved by the “internal forum” of the confessional, actually a reiteration of the conscience argument. It was allowed to be put into the Final Report, but much circumscribed by the condition that a good conscience was one which not only was based on, as Cupich put it, “an understanding” of Church teaching, but conformed to it.