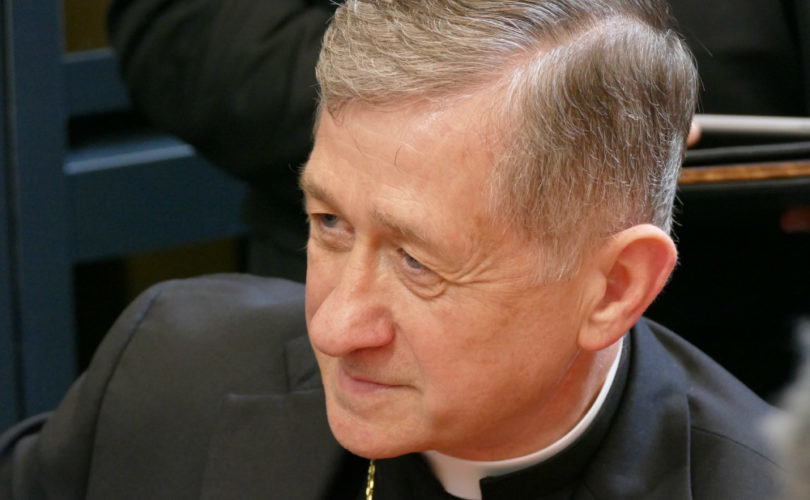 ROME, October 16, 2015 (LifeSiteNews) — Archbishop Blase Cupich of Chicago  — who is participating in the Synod of the Family at Pope Francis’ personal invitation —  said at a press scrum in the Vatican press office this afternoon that the conscience is “inviolable” and that he believes divorced and remarried couples could be permitted to receive the sacraments, if they have “come to a decision” to do so “in good conscience” – theological reasoning that he indicated in response to a follow-up question would also apply to gay couples.

During the lengthy press briefing, the archbishop also spoke approvingly of the so-called “Kasper Proposal,” which would permit divorced and remarried Catholics to receive Communion in some cases. Cupich explained that he had distributed Cardinal Walter Kasper's book, The Gospel of the Family, in which the cardinal had laid out this proposal, to all of the priests in his diocese.

“In Chicago I visit regularly with people who feel marginalized: the elderly, the divorced and remarried, gay and lesbian individuals and also couples. I think that we really need to get to know what their life is like if we’re going to accompany them,” he said.

When asked to give a concrete example of how he would accompany the divorced and remarried in their desire to receive the sacraments, Cupich replied: “If people come to a decision in good conscience then our job is to help them move forward and to respect that. The conscience is inviolable and we have to respect that when they make decisions, and I’ve always done that.”

When asked by LifeSiteNews if the notion of accompanying people to “the Sacrament” who had a clear indication of conscience to do so also applied to gay couples in the Church, Cupich indicated an affirmative answer.

“I think that gay people are human beings too and they have a conscience. And my role as a pastor is to help them to discern what the will of God is by looking at the objective moral teaching of the Church and yet, at the same time, helping them through a period of discernment to understand what God is calling them to at that point,” he said. “It’s for everybody. I think that we have to make sure that we don’t pigeonhole one group as though they are not part of the human family, as though there’s a different set of rules for them. That would be a big mistake.”

The Catholic Church teaches that while a person “must always obey the certain judgement of his conscience” the conscience, at the same time, must be formed by the “Word of God” and the “Church’s authority and her teaching” to make judgments that are “in conformity with the true good willed by the wisdom of the Creator.”

“Conscience can remain in ignorance or make erroneous judgements. Such ignorance and errors are not always free of guilt,” the Catechism of the Catholic Church states.

On Cardinal Kasper's proposal specifically, Cupich said, “I really do find his treatment of what he calls the Gospel of the family – it’s published in a book, and I gave it, by the way, to all of my priests, I wanted them to read that because I thought it was very rich theologically.”

“I think he has reasoned this proposal well…I am open to looking at all of it,” he said. “I do think that we can't ignore the fact that there are lots of people out there who feel stuck, and we have to look for a way in which we're going to reach out to them.”

Cupich said “we should look at a way in which people are not just accompanied but integrated and reconciled.”

Kasper’s proposal has been criticized by faithful leaders in the Church such as Cardinal Burke as a “serious error” since it makes doctrine and pastoral practice appear to be in conflict with one another.

“The pastoral practice exists to help us to live the truths of the faith, to live the doctrine of the faith in our daily lives. You can’t have a conflict [between these],” said Burke in an interview with LifeSiteNews yesterday.

Others, such as Cardinal Marc Ouellet, have criticized Kasper’s proposal as resulting from a mistaken notion of God’s mercy.

It is “not a matter” of the Church “being more or less ‘merciful’ with regard to persons in irregular situations, but of taking seriously the truth of the sacraments (the gifts of the Bridegroom) and their missionary dimension,” Ouellet wrote in a recently published book on marriage and the family.

Archbisop Cupich had previously responded to a question, in December 2014, about giving Holy Communion to pro-abortion Catholic politicians, saying he would “not use the Eucharist or as they call it the communion rail as the place to have those discussions or weigh in which people would be either excluded from the life of the church.”

Since his appointment as bishop of Spokane in 2010, Cupich has developed a reputation as one of the most “progressive” bishops in the U.S. episcopate. Last year, Pope Francis tapped Cupich to lead the Chicago archdiocese, one of the country's most prominent dioceses, previously led by the conservative Cardinal Francis George.

In 2011 Cupich, then bishop of Spokane, forbade priests in his diocese from taking part in the semi-annual 40 Days for Life pro-life prayer vigil. His response to the recent U.S. Supreme Court’s decision to redefine marriage focused primarily on decrying discrimination against homosexuals rather than criticizing the imposition of same-sex “marriage.”

The Catechism of the Catholic Church teaches that homosexual acts are “intrinsically disordered” and that “under no circumstances can they be approved” since they are contrary to God’s plan for sexuality.

“They are contrary to the natural law. They close the sexual act to the gift of life,” states the Catechism.

The Catholic Church teaches the those who present themselves to receive Holy Communion, which Catholics believe to be the real body and blood of Jesus Christ, must be in the state of grace and be free from mortal sin, which cuts off the life of God’s grace from the soul.

“Anyone aware of having sinned mortally must not receive Communion without having received absolution in the sacrament of penance,” the Catechism states. St. Paul in his letter to the Corinthians states that whoever receives Communion “in an unworthy manner” is “guilty of profaning the body and blood of the Lord” thereby bringing “judgement upon himself.”

Cardinal Burke, when asked yesterday by LifeSiteNews in an exclusive interview what the faithful should do when they see Synod Fathers suggesting heterodox positions regarding homosexuality and divorce, replied that the the faithful must stay close to Jesus.

“We follow our Lord Jesus Christ. He is our Master. And we are all held to be obedient to him and to his word, beginning with the Holy Father and with the Bishops. If a bishop, or a priest, or anyone, should announce something or declare something that is contrary to the truth of Our Lord Jesus Christ, as it’s communicated to us in the teaching of the Church, we follow Christ.”

“I say to people who are very anxious, because it seems in this time that there is simply a lot of confusion and statements that are really quite stunning about the faith, that we should remain serene. Because, in the Catholic Church, we have teaching authority, which is expressed, for instance, in the Catechism of the Catholic Church, and we simply need to study those things more deeply, adhere to them more ardently, and not be led astray by false teaching, from whatever source it comes,” he said.