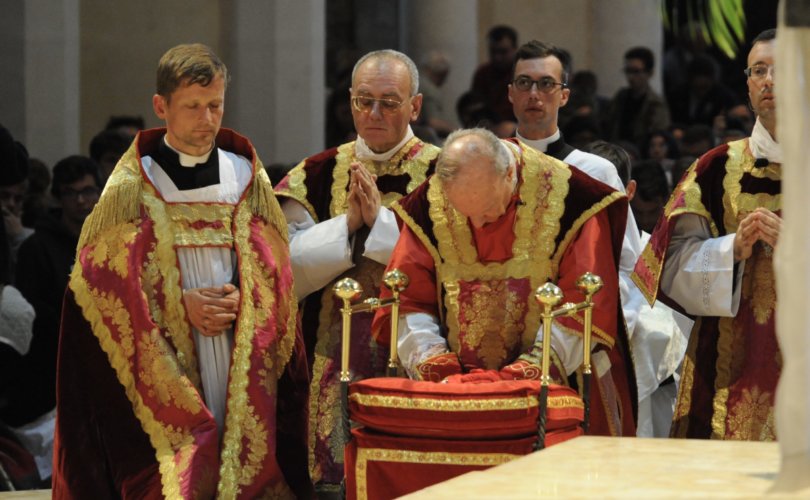 June 12, 2019 (LifeSiteNews) — Last Monday in the French cathedral of Chartres – where for centuries pilgrims have venerated the Veil of the Blessed Virgin Mary – Archbishop Andre-Joseph Léonard, former Primate of Belgium, celebrated the Tridentine Mass in front of thousands of pilgrims who had walked more than 60 miles from Paris in the now traditional three-day Pentecost pilgrimage.

Archbishop Léonard electrified the worn-out pilgrims with his vigorous homily, given without notes from the fullness of his heart. Yes, the Catholic Church is holy despite being made up of sinners, he said, “because the Holy One of God, Jesus, is her head, because the Holy Spirit is her soul, because the Most Blessed Virgin Mary is her heart.”

God sent His Son to save the world, he recalled, letting him be “identified with sin” and descend into the abyss so that all can know he can “reach every man and woman, however profound be their disgrace.”

Msgr. Léonard also insisted that while Our Lord gives us His peace, this peace also requires fighting for good. He acknowledged that this is a time of great “confusion,” even within the Church, regarding the “indissolubility of marriage,” “homosexual acts” and “priestly celibacy.”

“We must be grateful when on some of these points our current Pope, Pope Francis, speaks clearly,” he said. “And we can also continue to be inspired by the very clear and also very merciful teaching given to us by Pope Emeritus Benedict XVI and by Saint John Paul II.”

Visibly moved by the many thousands of young people who made up the largest part of the 14,000 pilgrims who came from Paris to Chartres (another 7,000 walked the other way with the Society of Saint Pius the X on the same dates), Archbishop Léonard called on them to be open to the will of God, to found a family, to live in true celibacy if single, or to answer the call to the religious or priestly life.

When the Apostles’ Creed was sung, Archbishop Léonard visibly and forcefully punctuated the words “one, holy, Catholic and apostolic” with his right hand.

Another moving moment was at the beginning of the consecration, when Bishop Christory of Chartres, who presided at the Mass from the throne, moved to the steps in front of the altar together with his assistant priests in order to kneel before the Real Presence, then returning to his place after the Elevation. All in the Cathedral were turned toward Our Lord in adoration.

Among the hundreds of priests, monks and other religious present, from traditional communities and societies but also from French dioceses, was Father Jean-Marc Fournier, the chaplain of the Paris firefighters who saved the Most Holy Sacrament and the Holy Crown of Thorns from Notre-Dame de Paris at the height of the fire that destroyed its roof a month ago.

But the flame of the faith also burns in France. In its 37th edition, the Paris-Chartres pilgrimage registered a five percent increase in pilgrims, who meditated this year on the theme of the social reign of Christ. All is not lost!

Below is the full transcript of the homily of Archbishop Léonard in Chartres, Pentecost Monday 2019.

In the name of the Father and the Son and the Holy Spirit, AMEN!

We all know, my brothers and sisters, the multinationals that trade all over the world. Well, and this is a scoop, the most impressive multinational in the world is the Catholic Church that spreads among all nations. And we owe it to the Holy Spirit and to St. Peter, in the reading the Acts of the Apostles of today. Peter went to Cornelius, a pagan, a Roman soldier, and all his entourage; he entered his house – which is forbidden for a Jew! – and lo, at Cornelius' request, Peter evangelizes him, he speaks to him about Jesus, true God, true man, crucified and risen. As soon as he finished his sermon, the Holy Spirit fell on Cornelius and all his family … and Peter was faced with a problem. They had already received the sacrament of confirmation, how could they be denied the water of baptism? So Peter baptized these pagans after an extremely short catechumenate.

It is thanks, therefore, to the Holy Spirit, and thanks to Peter and then to Paul that the Church has become a true multinational, no longer bound to one people but the multinational of faith, hope and charity throughout the world. And this is what allowed us here, Gauls, Celts, Attuatians, Nervians and Eburons and other peoples of the time to finally enter the Catholic Church. And this Catholic Church, we dare in the Creed to say that it is one, holy, Catholic and apostolic. I sometimes hear people, in this day and age, after the revelation of so many scandals that have hurt us, say, “Can we still say that the Church is one, holy, Catholic and apostolic?” Well, yes, it is holy, even though it is made up of sinners – the proof of that is that we are here. It is composed of sinners.

But she is holy because the Holy One of God, Jesus, is her head, because the Holy Spirit is her soul, because the Most Blessed Virgin Mary is her heart, because to guide her on the path of history she is supported by the Holy Tradition that comes from the apostles, and she is illuminated by the Holy Scriptures, and because at the heart of the life of the Church there is what we do now: there is the Most Holy Sacrament of the Eucharist. And moreover, over the centuries, the Church, from the sinners who compose it, is capable of producing saints – and we will all have the duty to become that sooner or later.

And to fulfill her mission, the Church has as a source of hope and as a source of peace the words we heard in the Gospel: these are the two most precious verses of the whole New Testament: “God so loved the world that he gave his only Son, so that whoever believes in him may not perish but instead have eternal life, for God did not send his Son into the world to judge the world but that the world may be saved.” They are a pure marvel.

St. Paul summarized that in his second letter to the Corinthians in chapter 5, verse 21, when he said, “He who had not known sin, the Holy One of God” – this is how the demon addressed Jesus, “we know who you are, Jesus of Nazareth, you are the Holy One of God” – well, says Paul, “he who was without sin, the Holy of God, God identified him for us with sin, he put him in the rank of sinners so that we sinners, can have a part in the holiness of God.”

Well, he who believes in this, he who puts his faith in Jesus who descended to the bottom of the abyss, is inhabited by an inextinguishable hope and receives the gift of peace – but at what a price! The price paid by the one who saved us. On Easter evening in John's Gospel, Jesus twice addresses the disciples saying to them: “Peace be with you.” And he shows them the wounds of his hands and the wound on his side – the price he paid, coming up from the abyss, to give us the gift of peace.

This was the theme of your pilgrimage: to be a missionary of peace. But there is a price, and a price we have to think about. For it is said in John's Gospel in the verses following the words that I just quoted: “Men have preferred darkness to light,” and we must choose light and conform to the will, act according to the will of the Lord upon us. And it will be a fight.

Jesus came to give us peace. He said it explicitly on the evening of the Last Supper: “I give you peace, I give you my peace. I do not give it as the world gives it.” And in the synoptic gospels – Matthew, Mark, Luke – we hear these somewhat surprising words: “Do you think, says Jesus, that I have come to bring peace? No, but rather division and combat.”

There is also a lot of confusion at the moment in the Catholic Church on important points that affect the indissolubility of marriage, the relationship of the Conjugal Alliance with the Alliance of the Sacrament of the Eucharist, the question of the indissolubility of marriage, the question of homosexual practices, the question of the celibacy of priests in the Latin Church and so many other subjects: a great confusion. And it's going in every direction. And we must be grateful when on some of these points our current Pope, Pope Francis, speaks clearly. And we can also continue to be inspired by the very clear and also very merciful teaching given to us by Pope Emeritus Benedict XVI, and by St. John Paul II. We will have to fight with firmness, kindness, listening and mercy, but there will be battles to be fought.

And Jesus warned us: in the world you will have to suffer, but trust me, I have overcome the world.

I will close with a little message. I was very impressed to see all the families who are gathered here with people who already have their state of life, who are married, or who are single by choice, or who are single because of life's circumstances. There are ordained ministers, there are consecrated persons… But also so many young people!

So, my dear young people who are present here, stay always very close to Jesus. That is a source of peace, but it can also be very disturbing. He will ask a majority of you to found a solid home one day, that is, a man and a woman and the Lord in the middle: a beautiful “ménage à trois,” a man, a woman and the Lord who is the deep unity of a couple. He will ask some to live out a forced celibacy that wasn’t chosen because they never found a soul mate in life. And he will ask these people to live their celibacy in truth.

But he will certainly want to find, among you young people, girls who think that Jesus is the most beautiful, and who for the sake of his beautiful eyes will embrace one form or another of consecrated life. Be on your guard, and be welcoming, ladies! And among the young boys, he will want to find some who will accept to become priests for the service of the Church. In all the dioceses of France and Europe, starting with the diocese of Chartres, there is a need everywhere for young people who are so passionate about Jesus that they decide to dedicate their whole lives to him and the people he loves.

Do not be afraid. In the world, you will have to suffer and make demanding choices but trust, Jesus tells us, “I have defeated the world.” Amen, alleluia!