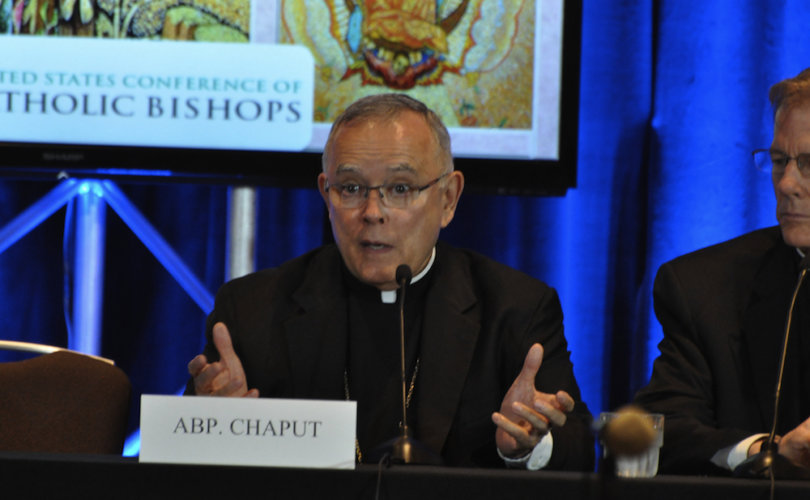 PHILADELPHIA, Pennsylvania, September 26, 2017 (LifeSiteNews) — Philadelphia Archbishop Charles Chaput weighed in last week on the heated debate surrounding Jesuit Father James Martin’s continual promotion of unorthodox stances on sexuality and those who would seek to demonize opposition to those stances.

Writing Thursday for First Things, Archbishop Chaput addressed some of the reaction to the Catholic University of America's Theological College having cancelled Father Martin’s scheduled appearance at its Alumni Days.

In the process of issuing a call for civility, the archbishop offered reinforcement to the LGBT-affirming Jesuit and to the sweeping statement that critics of his problematic stances are attacking him personally. The archbishop also chose to bring up a two-year-old quarrel of his own with some of those critics.

Archbishop Chaput pointed out in his article that Father Martin’s message is not above reproach and noted there has been significant toxic derision from factions on the left for decades.

He also cautioned against casting Father Martin as a martyr, acknowledged “perceived ambiguities in some of Fr. Martin’s views on sexuality,” and said clear judgment is an obligation of Catholic discipleship — especially on moral issues.

But he also wrote, “Some of the recent attacks on Martin, sparked by his book Building a Bridge, have been inexcusably ugly. Fr. Martin is a man of intellect and skill whose work I often admire. Like all of us as fellow Christians, he deserves to be treated with fraternal good will. It’s one thing to criticize respectfully an author’s ideas and their implications. It’s quite another to engage in ad hominem trashing.”

Father Martin offered his appreciation to the archbishop on social media.

“I am exceedingly grateful to Archbishop Charles J. Chaput, OFM Cap., archbishop of Philadelphia,” he said, then citing this particularly useful portion from the archbishop’s column.

It said the archbishop, and San Diego Bishop Robert McElroy, “had both penned essays lending backing to Martin’s credibility as an effective evangelizer for the church, and condemning the campaigns aimed at trashing the Jesuit’s reputation.”

Various media reports from the left are charging Father Martin's critics with malevolence, accusing them of forming a “cyber-militia.”

And Father Martin himself has labeled his critics the “Catholic alt-right,” presumably to paint those objecting to his affirmation of homosexual activity as extreme.

The Reporter is also among the outlets using language such as “far right” and “Catholic alt right” to malign Father Martin's critics.

Father Martin has a book out titled, Building a Bridge, in which he calls for the Church to be more welcoming, and for Church leaders to stop firing Catholic employees when the employees publicly violate the Church’s teaching on sexual morality.

Father Martin also calls for the Church to amend the language in its catechism to be more accepting of homosexuality. The first part of the book is drawn from his address last fall for the Vatican-censured homosexual advocacy group New Ways Ministry, on the occasion of the group’s giving him its Building Bridges award.

Editor at large for Jesuit-run America magazine, Father Martin is also a consultant for the Vatican’s communications operations, appointed earlier this year by Pope Francis.

In interviews and social media posts about the controversy created by his actions and statements, Father Martin claims that he simply calls for people to love LGBT individuals and that is the reason for the attacks on him.

And some of his supporters portray opposition to his controversial stances on homosexuality as resistance to the Church welcoming LGBT-identifying individuals.

Archbishop Chaput denounced any bitterness toward Father Martin in his First Things column but said it is not new.

In fact, the archbishop said, “It has a perfect mirror-image in the poisonous sarcasm, contempt, and systematic cultivation of skepticism and dissent that has marked some self-described “progressive” Catholic scholars, authors, columnists and publications for decades.”

“It would be false — one is tempted to say “deceitful” — to suggest that today’s internal Church divisions are mainly the work of right-wing cyber-militias, when so many other culprits readily spring to mind,” the archbishop wrote.

The cyber-militia reference came from Villanova University professor Massimo Faggioli’s recent column, in which, among other things, Faggioli asserts a synoptic parallel between “the neo-Nazi and white supremacist rally in Charlottesville, Virginia, and this latest campaign against Fr. James Martin.”

The cyber militants, he said, are part of an age of anger stemming from some 30-plus years of episcopal appointments by Pope Saint John Paul II and Pope Benedict XVI that have altered the U.S. body of bishops toward a culture warrior persona.

Archbishop Chaput also gave the Commonweal contributing editor a nod for “generously” mentioning his own public go-round with Church Militant and the Lepanto Institute just before the 2015 World Meeting of Families in Philadelphia.

The 2015 tussle stemmed from the two groups having reported on pro-abortion or otherwise problematic associations related to some of the meeting organizers. Though the associations were documented, the archbishop had responded by saying Lepanto Institute and Church Militant were sowing division.

Lepanto Institute president Michael Hichborn noted irony in Archbishop Chaput calling for civility in the current Father Martin matter while feeling the need to return to something two years old in his organization’s regard.

“In his call for civility, he decided to engage in an unprovoked smear of the Lepanto Institute,” Hichborn said. “And for what?”

“It's amazing that he would call for Catholics to “at least stop demonizing each other,” while in the same breath, demonizing my organization,” continued Hichborn. “He had no reason to mention the Lepanto Institute in that article, except to cast aspersions.”

ChurchMilitant.com executive news producer Christine Niles noted that civility does not come at the expense of truth.

“Archbishop Chaput makes some excellent points in his article,” Niles told LifeSiteNews. “Unfortunately, he goes wrong where he seems to imply that civility trumps truth.”

“There is a place for righteous indignation expressed clearly and firmly,” she said, “especially where heresy is involved, leading many souls to spiritual ruin.”

“Father Martin is, frankly, trying to normalize homosexuality in the Church,” Niles continued, “and his agenda — which is endangering numerous souls — must be confronted, and it must be done so in clear, unsparing terms. His lies cannot be allowed to spread for the sake of ‘civility’ and ‘politeness.’”

The list of Father Martin’s provocative statements contravening the Church’s principles on sexual morality is extensive and problematic independent of any issue with his book’s message.

He publicly criticized directives by Bishop Thomas Paprocki of the Diocese of Springfield, Illinois, earlier this year. Bishop Paprocki said Catholics in his diocese in same-sex “marriages” shouldn't present themselves to or be admitted to Holy Communion, nor may they receive a Catholic funeral if they died without showing signs of repentance.

In an effort to justify his argument, the Church should not fire actively homosexual Catholics – in spite of the long-established expectation for Catholic employees to refrain from public violations of the Church’s moral teaching – Father Martin told the New York Times in June of this year that “Pretty much everyone’s lifestyle is sinful.”

He has also said gay relationships should be reverenced, that some of the Church’s saints were probably gay, and that God made LGBT persons as they are.

Father Martin has said as well that Church teaching on homosexuality isn’t authoritative and that same-sex couples should be able to kiss at the sign of peace during Mass. He likened opposition to gay “marriage” to racism and implied that opposition was homophobia, and inferred that his critics are secretly gay themselves.

Some arguing that Father Martin has been personally targeted for hatred and vitriol, also claim that those opposed to the contentious priest being given a platform at a Catholic venue – owing to his continual promotion of controversial views on sexuality – are guilty of censorship because some of his speaking engagements have begun getting rescinded.

Some, including Father Martin, have also begun calling the USCCB and other Church institutions to step in against those taking issue with Father Martin’s problematic presentation of LGBT issues.

Critics of Father Martin’s presentation of Catholic LGBT outreach have also been charged with rancorous discourse and causing division in the Church.

San Diego Bishop Robert McElroy is among those saying the pushback to Father Martin equates to personal attacks, charging his critics with homophobia, distorting Catholic theology by overstating the significance of the virtue of chastity and resentment of Pope Francis.

Bishop McElroy also labeled those taking issue with Father Martin’s message a “cancer of vilification” in the Church.

Father Martin continues to call for dialogue between the Catholic Church and LGBT-identifying Catholics, while his critics say he neglects to call for – as the Church teaches – those experiencing homosexual inclinations not to act upon them, and that he in fact encourages homosexual identification and activity.

They say as well that while Father Martin preaches the need for dialogue and for the Church to be welcoming, he for the most part does not engage with critics of his stances, often blocking those who challenge them on social media, and instead allows nastiness in response from his social media followers.

Father Martin recently got the lay group CatholicVote suspended from Twitter for a tweet poking fun at his being beaten in a theological debate on the social media platform.

And he reacted with accusations of hate and homophobia to C-Fam President Austin Ruse calling his actions against Catholic Vote “pansified.” Father Martin alleged that Catholic vote had urged violence against him.

Ruse maintains, as do the overwhelming majority of Father Martin’s critics, that most important, Father Martin jeopardizes souls by leading people to think homosexual activity is OK and that someday the Church will change Her teaching on sexuality.

'Fr. Martin’s book is not above legitimate, serious criticism that has nothing to do with ad hominem rancor'

Archbishop Chaput’s First Things column was not the first time the archbishop had indicated that Father Martin’s message was not unimpeachable.

He’d written of the Jesuit’s book in a Catholic Philly column in July, “What the text regrettably lacks is an engagement with the substance of what divides faithful Christians from those who see no sin in active same-sex relationships.”

Jesus “didn’t come to affirm us in our sins and destructive behaviors – whatever they might be,” Archbishop Chaput wrote, “but to redeem us.”