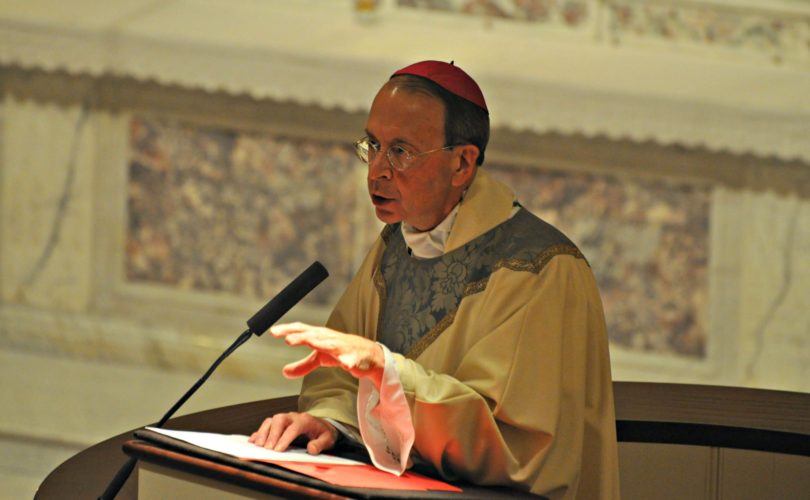 WASHINGTON, D.C., September 19, 2016 (LifeSiteNews) – The head of the U.S. Bishops’ committee on religious freedom challenged recent charges of hypocrisy leveled by the chairman of a federal civil rights commission against religious Americans concerned their faith is under attack in society.

Archbishop William Lori of Baltimore issued a statement calling accusations of bigotry against people of faith by U.S. Commission on Civil Rights Chairman Martin Castro irresponsible and said the comments show deep disrespect for the basis for Castro’s own work on the Commission.

“He makes the shocking suggestion that Catholic, evangelical, orthodox Jewish, Mormon, and Muslim communities are comparable to fringe segregationists from the civil rights era,” the chairman of the United States Conference of Catholic Bishops' Ad Hoc Committee for Religious Liberty said. “These statements painting those who support religious freedom with the broad brush of bigotry are reckless and reveal a profound disregard for the religious foundations of his own work.”

Lori was responding to Castro’s statements in the civil rights commission’s 307-page “Peaceful Coexistence: Reconciling Nondiscrimination Principles with Civil Liberties,“ which was released last Wednesday and began by prioritizing nondiscrimination laws over and above the free exercise of religion, decreeing that First Amendment freedom of religion rights must yield to transgender, homosexual, and same-sex “marriage” inclusion wherever sincerely held Christian beliefs are in conflict.

The government report then pointed to religious exemptions, stating they “significantly infringe” upon the rights of citizens wanting redress for perceived discrimination on the basis of “sexual orientation and gender identity.”

“Religion is being used as both a weapon and a shield by those seeking to deny others equality,” Castro said, adding “The phrases ‘religious liberty’ and ‘religious freedom’ will stand for nothing except hypocrisy so long as they remain code words for discrimination, intolerance, racism, sexism, homophobia, Islamophobia, or any form of intolerance.”

Archbishop Lori pointed out that Catholics do not seek to impose morality on the people they serve, but they cannot give up their moral values while conducting their lives and ministry.

Most people who speak up for religious liberty are looking for the freedom to serve others in accord with their faith, the archbishop said, and they simply ask that the work of their institutions be carried out by those who believe in the mission and respect a Christian witness.

“Rest assured,” he continued, “if people of faith continue to be marginalized, it is the poor and vulnerable, not the chairman and his friends, who will suffer.”

Archbishop Lori said there will always be institutions with beliefs that are not in line with popular opinion, and further, that Castro’s statement indicates the commission does not view the United States as a pluralistic society.

“We respect those who disagree with what we teach,” he wrote. “Can they respect us?”

The USCCR report took aim specifically against the Religious Freedom Restoration Act (RFRA), criticizing the law protecting religion by saying it “does not limit others’ freedom from government-imposed religious limitations under the Establishment Clause.”

The RFRA, passed unanimously by the U.S. House of Representatives and 97-3 by the U.S. Senate, was signed by President Bill Clinton in 1993.

Half of the commission's eight members were appointed by President Obama, including Castro, a Chicago Democrat named U.S. Commission on Civil Rights chairman by Obama in 2011.

Religious liberty advocates were quick to denounce the federal decree last week. “Religious liberty and the right of conscience are at the core of the First Amendment and the reason for America’s existence. We have always accommodated religious liberty,” Liberty Counsel Founder Mathew D. Staver told LifeSiteNews. “To say that words like ‘religious liberty’ are discriminatory or despicable is anti-American and anti-Constitutional.”

“To not respect religious liberty is rebellion against God and the foundation of secularism,” Staver said, “which give birth to tyranny.”

Bill Donohue of the Catholic League for Religious and Civil Rights characterized the report as “a scathing assault on religious liberty” and disputes the report from the get-go, pointing out that prioritizing civil statutes over the First Amendment is “factually wrong.” “What is preeminent is the first right found in the First Amendment, namely, the right to religious exercise. This agency has now decided to invert these rights. This is indefensible.”