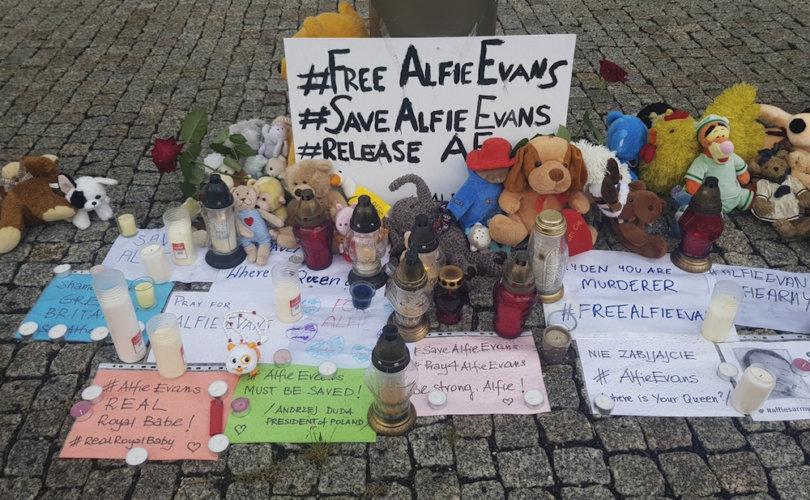 ROME, April 26, 2018 (LifeSiteNews) — Following support for Alfie Evans from Pope Francis, the Archbishop of the city where the hospital threatening Alfie’s life is located flew to Rome to speak with the Pope insisting on support for the hospital. Liverpool Archbishop Malcolm McMahon said Wednesday that the medical team at Alder Hey hospital has been doing everything “humanly possible” in Alfie’s care, The Tablet reported.

And appearing to downplay the offer to treat the child in Italy — which has the support of Pope Francis — McMahon also defended the UK’s medical and legal systems, stating they were “also based on compassion and the safeguarding of the rights of the individual child.”

Speaking from Rome, McMahon told the outlet he’d discussed the case with Francis after the pope’s Wednesday’s general audience on St. Peter’s Square. “I am grateful for the medical and chaplaincy care which Alfie is receiving,” the Archbishop told the Tablet.

McMahon’s comments counter the support Alfie and his family have gotten from Pope Francis, other prelates, countless Catholics and others.

The Catholic Association (TCA), a lay group that advocates for Catholic principles in the public square, said in a statement “It's confusing and disappointing” to see the Catholic leadership in Britain “abandon Catholic social teaching” in the Alfie Evans case.

McMahon wasn’t alone in supporting the hospital, as his comments come one week after the Catholic Bishops Conference of England and Wales issued a statement in support for Alder Hey saying in part, “The professionalism and care for severely ill children shown at Alder Hey Hospital is to be recognised and affirmed.”

Bishops of England and Wales: Criticism of Alder Hey unfounded

“We know that recently reported public criticism of their work is unfounded as our chaplaincy care for the staff, and indeed offered to the family, has been consistently provided,” the bishops said.

“Our hearts go out to the parents of Alfie Evans and our prayers are for him and with them as they try to do all they can to care for their son,” they said. “We affirm our conviction that all those who are and have been taking the agonising decisions regarding the care of Alfie Evans act with integrity and for Alfie’s good as they see it.”

'Split from the pope'

TCA denounced British Church leaders and Austen Ivereigh of Catholic Voices U.K. for having “split from the pope by defending the government instead of Alfie and his family.”

Ivereigh has been vocal about the case on Twitter, and Catholic Voices U.K. – founded to ensure that Catholics and the Church are well represented in the media – posted the statement from the Catholic Bishops Conference of England and Wales on the Alfie Evans case on its website.

“The Church has long been the first and only voice to speak out for truth and defend the vulnerable,” TCA Senior Fellow Ashley McGuire said in the TCA statement. “True to that legacy, the Pope spoke out in defense of Alfie Evans and the fundamental human rights of his parents to do all they can to save the life of their child.”

“The Catholic faithful along with citizens of good will around the world have rallied and stood with the Pope and with Alfie and his parents in defending their rights and defending the beauty of Catholic social teaching,” McGuire continued, “which expressly condemns exactly what the U.K. government is doing: denying Alfie’s parents their rights to what is best for their child and forcing the child to suffer in his last moments.”

“It is moments such as these that Catholics, especially leaders like Austen Ivereigh, are called to stand apart from the fray and defend the truth even when it contradicts the powers that be,” McGuire said. “We thank the Pope for his leadership and look to U.K. Catholic leaders to join him in standing for Church teaching.”

“Moved by the prayers and immense solidarity shown little Alfie Evans, I renew my appeal that the suffering of his parents may be heard and that their desire to seek new forms of treatment may be granted,” Pope Francis said Monday.

Moved by the prayers and immense solidarity shown little Alfie Evans, I renew my appeal that the suffering of his parents may be heard and that their desire to seek new forms of treatment may be granted.

Bishop Francesco Cavina of Carpi, in northern Italy, who assisted arranging a meeting with Francis and Thomas Evans, said he doesn’t understand why British authorities have taken the position they have in the Evans case, saying it’s “beyond all human logic.”

“Two parents are asking to transfer their child from one hospital to another. I do not understand why this should be prevented,” the bishop said in a report from Crux. “If not in Italy, then in another hospital in England. It is difficult to understand something like this.”

“Let’s offer heartfelt prayers today for little Alfie Evans – now an Italian citizen – and his courageous parents,” Bishop Egan said. “If there is anything at all that can be done, may the Lord enable us by His love and grace to effect it.”

A group of bishops from Brazil released a statement of support for Alfie in the form of both a video and letter last week.

Referencing the specter of Alfie’s transport to Italy for care, Archbishop McMahon told The Tablet yesterday that the medical and legal systems in the UK are based upon compassion and protecting the rights of the individual child.

“I am very aware of the compassion which is characteristically shown by the Italian people to those in need, and in this case Alfie,” McMahon said. “But I know that our medical and legal systems in the UK are also based on compassion and the safeguarding of the rights of the individual child.”

USCCB with the pope in supporting Alfie and his parents

The United States Conference of Catholic Bishops echoed Pope Francis in expressing support for Alfie and his parents’ efforts to obtain alternative treatment for him.

We urge all Catholics to join the Holy Father in praying for #AlfieEvans and his family and that their desire to seek new forms of treatment may be granted. May the dignity of Alfie’s life and all human life, especially those who are most vulnerable, be respected and upheld. https://t.co/gA4RhU7nL0

Heavenly Father, we lift up to You #AlfieEvans and his parents in their time of need. Through the intercession of Our Lady of Good Help, come to his aid and secure his care. Move doctors, hearts and nations to accomplish Your loving will. Amen. @ChampionShrine

Parents have a natural right

“The parents of Alfie Evans have a natural right to accept the Vatican hospital’s offer to try to extend the life of Alfie and provide more humane care,” Christie said. “Baby Alfie and his parents should not be prisoners of a British hospital.”

“The failure of the British Catholic Bishops and so-called leaders like Catholic Voices of England to recognize these simple and basic truths is disgusting and shameful,” she continued. “We urge all faithful Catholics to stand with Pope Francis, who called on the British government to allow Baby Alfie’s parents to seek the alternative treatment that has been generously offered.”