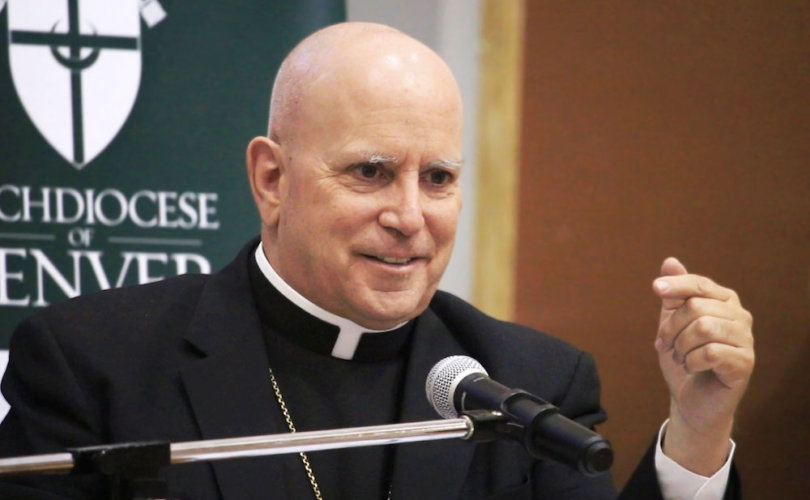 DENVER, Colorado, January 30, 2019 (LifeSiteNews) – Denver Archbishop Samuel Aquila has written an open letter coming out against legislation currently being considered in Colorado that would not only ban schools from teaching abstinence-only sex education, but mandate the inclusion of materials pertaining to homosexuality, gender confusion, and abortion.

HB 1032 saw its first hearing before the House Health and Insurance Committee Wednesday, the Denver Post reports. It mandates that even charter schools must provide information about “all preventive methods to avoid unintended pregnancy and sexually transmitted infections” and present it so that students “decide for themselves which preventative methods are best suited for their individuals needs, beliefs and values.” It mandates that if teachers choose to discuss pregnancy, they must also discuss both adoption and abortion without showing a preference for either.

“Public schools would have to promote abortion as an equal option to life.”

Schools would be barred from teaching “sexual abstinence as the primary or sole acceptable preventive method available to students,” and would also have to address the “relational or sexual experiences of lesbian, gay, bisexual, or transgender individuals.” The bill includes parental notification about and the option to remove kids from classes on human sexuality, but no notification specifically for “sexual orientation” or “healthy relationships” lesson plans.

In a letter dated January 23, Archbishop Aquila casts the proposal as the latest sign of the tension between Catholic educational work and the broader culture.

“We know that God made us male and female, in his image and likeness, but the comprehensive curriculum route which most schools will likely adopt teaches innocent children this is not true,” he writes. “Specifically, public schools would have to promote abortion as an equal option to life, and parents wouldn’t be notified before lessons were presented on gender-identity and sexual orientation.”

“Each of us must do our part to fight this legislation,” he continues, vowing to “stand firmly against all ideologies that defy natural law and contradict the truth that has been revealed to us about the human person through the teachings of Our Lord, Sacred Scripture, and the Church.”

Aquilla concludes by stressing that those who see religious schools as an obstacle to their idea of modern education fail to appreciate the role they play.

“Our Catholic schools are more than you realize,” he writes. “They provide a haven amidst our morally confused culture, educate the whole person and assist parents in forming their children in an authentically Catholic worldview, one that recognizes the dignity of the human person created for God…I encourage every parent with school-aged children to consider this opportunity to learn about how a Catholic education can greatly benefit their children.”

Last year, the Centers for Disease Control (CDC) released a study finding downward trends in teen sexual activity from 2005 to 2015. It did not declare a direct link between the results and abstinence education funding, but pro-family advocates say that message is clear when the CDC findings are combined with other studies connecting condom distribution and the promotion of promiscuity to increased teen pregnancy.