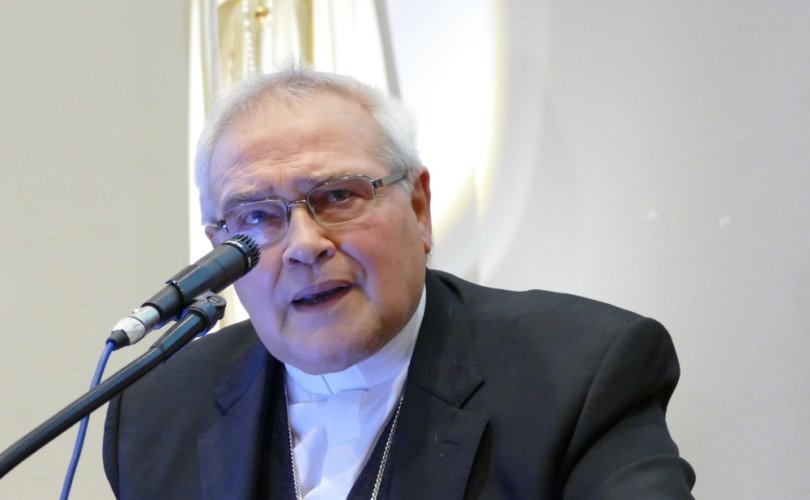 ROME, January 4, 2018 (LifeSiteNews) — “There is confusion. It exists, and it’s serious. No reasonable person can deny this,” a signatory to a profession upholding the “immutable truths about sacramental marriage” has said.

Archbishop Luigi Negri, who has joined a former U.S. nuncio and three Kazakh bishops in putting his name to the profession, explained in an interview today with the Italian Catholic agency La Nuova Bussola why he signed the profession.

In a broader conversation about the current confusion in the Church, the emeritus archbishop of Ferrara-Comacchio in northern Italy also said the Martin Luther who has been presented during the 500th anniversary of the Protestant Reformation “doesn’t exist,” and that we need to work so that “the splendor of tradition” returns and bears fruit in the lives of Christians.

Here below is the interview with Archbishop Negri translated and published with the kind permission of La Nuova Bussola.

Bishop Negri, what led you to sign the profession [of the three Kazakh bishops]?

Faced with the grave confusion in the Church regarding the issue of marriage, I believe it is necessary to put forward again the clarity of the traditional position. It seemed right to me to sign because the content of the [document’s] position is what I have widely presented over the past years — not only in recent months – at every step of the efforts I dedicated to the theme of the family, life, procreation, and the responsibility to educate and form young people. These are issues of absolute importance which the Catholic world as a whole does not seem to be very aware of.

To imagine a Church without an explicit, systematic, and I would say daily concern for the defense and promotion of the family and its mission to evangelize and educate suggests a Church that is seriously and heavily conditioned by a worldly mentality. Such a mentality, which largely dominates our societies, holds that all “morally sensitive” issues, to use what’s become a commonly used expression, are the responsibility of political and social institutions, first and foremost among States. In accord with the Church’s social doctrine, I hold that the issue of the person and the development of his identity and responsibility in the world are a specific, principal, indispensable task of the Church.

A battle is being fought between the mentality of the world — what Pope Francis in the first months of his pontificate called “the dominant single-way of thinking” — and the Christian idea of life and existence. If the Church does not fully engage in this confrontation, it will end up essentially reducing itself to a position of substantial self-marginalization from societal life.

The Profession of the three Kazakh bishops spoke a lot about the current confusion in the Church. You have also noted it, and yet there are some who deny that this confusion exists, and say that it is only a matter of resistance to a path toward the Church’s renewal.

There is confusion. It exists, and it’s serious. No reasonable person can deny this. I recall the forceful but terrible words of Cardinal Caffarra some time before his death, when he said: “A Church that pays little attention to doctrine isn’t a more pastoral Church but a more ignorant Church.” This ignorance breeds confusion. Again I quote Cardinal Caffarra, who said that “only a blind man can deny that there is great confusion in the Church.” And I can testify to it from what I have seen especially in the last months of my episcopate in Ferrara-Comacchio. I spoke daily with good Christians whose consciences were filled with very great disappointment, and who were suffering greatly. I say this quite clearly: it was a greater suffering than that of so many ecclesiastics and of so many of my brother bishops. It is the suffering of a people who don’t feel cared for any more, or supported in the basic demands of truth, goodness, beauty and justice which constitute the deepest heart of man, and which only the mystery of Christ profoundly reveals and brings about in an extraordinary way.

Speaking of confusion, in recent days a new controversy has arisen with accusations of doctrinal errors that were never corrected being levelled against Pope Benedict, and the “dance of Vatican II” is being talked about again.

I don’t want to get lost in quick and ideological re-readings of foundational moments in the life of the Church, like the Council for example: it was an extraordinary and complex experience … with aspects that are not always clear. Or the great and unforgettable magisterium of St. John Paul II, and his commitment to re-proposing to the world the proclamation of Christ as the only possibility for salvation, and so re-proposing the Church as the sphere where one experiences a renewed life, as he would say. These are milestones along a journey which then found in the great magisterium of Benedict XVI a point of synthesis, the strong call to that continuity in the transition from the pre-conciliar reality to the reality of the Council and post-Council: it was an extraordinarily important formulation which the Church is still living.

John Paul II and Benedict XVI have elevated the Catholic magisterium to a level of extraordinary breadth. It is absurd to bend the interpretation of these great figures in the life of the Church to shop interests. But it is also absurd to compare the pontificates of John Paul II and Benedict XVI with the magisterium of Pope Francis. In the history of the Church each pope has his role. Francis’ role is certainly not to re-propose the fullness and breadth of the Christian message but to draw certain necessary consequences on the ethical and social planes.

Speaking of confusion, this year marked the 500th anniversary of the Protestant Reformation. In the Church we saw and heard things that were frankly shocking.

The [current] doctrinal and cultural confusion has some aspects that people with common sense and adequate cultural formation find hard to believe. This matter regarding Luther is incredible. This Luther that’s being talked about so much doesn’t exist. This reforming Luther, this evangelical Luther, this Luther whose presence was positive and beneficial for the Church has no historical and critical basis.

It is quite another matter if, at a time of serious attack on religious tradition in the West, it is necessary that all religious men understand that the time has come for a new and great common effort. Of course, we have to work together. But in order to work together we don’t need to water down our own identity or think that the existence of an identity is an obstacle to our efforts. It’s just the opposite: those who enter into religious dialogue, into ecumenical dialogue, into dialogue with society with their own precise identity make an extremely important contribution. You can’t collaborate and dialogue when you begin with confusion. You dialogue by starting with identity, and the Catholic identity, if it is lived out fully, has a unique and irreplaceable contribution to make to the life of a society.