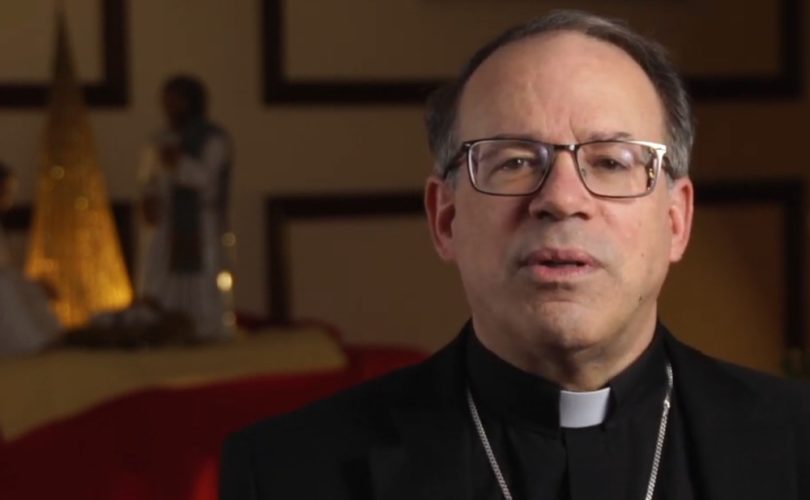 OTTAWA,  May 26, 2021 (LifeSiteNews) – Archbishop of Ottawa-Cornwall Marcel Damphousse warned trustees of Ottawa’s Catholic School Board (OCSB) at a meeting last night to vote against a motion to fly the homosexual “Pride flag” at Catholic schools in the month of June, telling them that the flag is a “political statement that endorses behaviors and lifestyles contradicting the Catholic Church’s teaching.” Despite this warning, however, the board voted 9-1 in favor of flying the rainbow-colored flag, beginning at the board’s education center this year and moving on to flying the flag at all schools the following year in the month of June in perpetuity.

Archbishop Damphousse began his presentation by telling the board that instead of uniting the community, the motion to fly the gay Pride flag has caused “division” (watch presentation here beginning at 1:05:40).

“I have received many, many messages this past weekend from concerned parents, grandparents, staff, and Catholic school rate-payers about this motion,” he said. He went on to explain that, despite what LGBT activists state, the flag is not simply about promoting inclusivity, diversity, and tolerance.

“Now, we know that flags can have many meanings,” the Archbishop said. “The gay Pride flag is not just about inclusion. It is a political statement that endorses behaviors and lifestyles contradicting the Catholic Church’s teaching on the dignity of the human person.”

Damphousse reminded the trustees of their duty and responsibility to uphold and promote in Catholic schools the teachings of the Catholic Church.

“We contradict our values, and undermine the distinct identity of the Catholic school system, if we pretend to endorse political ideologies at odds with our Catholic faith,” he continued.

“This causes division,” he added.

The Archbishop went on to say that he is “really concerned about the spiritual well-being of our community right now.’”

He pointed out that Catholic schools already have symbols that represent everyone, leaving no one behind.

“We have two symbols already in our schools and on our buildings, the cross of Jesus Christ and the Canadian flag. The cross is a symbol of God’s love for each and every one of us, a love that saw Jesus Christ give his life for our salvation,” he said.

“The cross is the most inclusive symbol of our identity,” he continued.

“As Canadians, and those living in our great country, we recognize the privilege we have to participate in a multicultural society. And this is why we fly the Canadian flag. These two symbols include us all,” he added.

The Archbishop said that the gay Pride flag, when compared with these two uniting symbols, “endorses one political agenda over others, and it divides, it does not unite.”

“I urge you to reconsider this well-meaning but divisive motion that will only divide our school communities and not work towards fostering unity, peace, and respect,” he concluded.

Despite these strong words, the board nevertheless voted to fly the flags. Trustee Glen Armstrong was alone in voting against the motion. He suggested in questions to other trustees during the meeting that voting to fly the Pride flag would place them in conflict with the oath they took as trustees to uphold the teachings of the Catholic Church.

Teresa Pierre of Parents as First Educators criticized the trustees who voted in favor of the flags as being in “open rebellion” against their bishop.

“These travesties focus attention on the need to remove these trustees,” she said in an email to supporters.

Pierre commented that the trustees have also ignored Catholic parents who send their children to Catholic schools to receive a Catholic education.

The OCSB defended the move in a press release immediately sent out after the meeting, stating that it is guided by “Catholic social teachings” while quoting the author of the motion, Trustee Spencer Warren, along with the board’s Director of Education, Thomas D’Amico.

“I believe our collective actions tonight demonstrate our ongoing commitment to fostering student wellbeing,” Warren said.  “The flying of the Rainbow Flag tells our community our schools are inclusive environments that are safe and welcoming places for 2SLGBTQ+ students. This is something I’m very proud to support and something that will have a positive impact on our Catholic schools for generations to come.”

D’Amico said that “Pride month needs to be much more than a discussion about the flag; and in our Board, it includes prayers and practices that focus on inclusion, acceptance and human dignity.”

One Catholic dad in the Ottawa area, however, told LifeSiteNews that the board’s vote to fly the Pride flag is simply an outward manifestation of how the Catholic school system has been hijacked by activists pursuing an agenda at complete odds with Catholic teaching.

“This is simply ‘truth in packaging’ and confirms what is going on daily inside classrooms with rainbow lessons, rainbow flags, GSAs, etc.,” the dad said under condition of anonymity out of fear of repercussions from the board.

The Catholic Church, basing itself on the Bible and tradition, teaches that homosexual behavior is “intrinsically disordered” and a grave sin. St. Paul in one of his letters warns the Corinthians that “homosexuals” along with others, such as “idolaters” and “adulterers,” will “not inherit the kingdom of God.” The Church’s teaching on homosexuality and other sexual moral matters comes strictly from a place of love where the Church desires that men and women live a life pleasing to God that will lead to human flourishing and ultimately to heaven.

The Church also teaches that “pride” in salvation history is directly linked to an explicit refusal to follow God and his rule. The Book of Proverbs warns that “pride goes before destruction.” In the 1970s, LGBT activists co-opted the rainbow, originally a religious symbol of God’s covenant with man from the time of Noah, to become an international symbol of the homosexual movement and its view of the human person and sexuality that is at odds with biology, the social sciences, the world’s major religions, and specifically with the Catholic faith.

The Ottawa dad said that clergy and parents can “no longer be in denial” about the main driving force behind Catholic boards that vote to fly the homosexual flag.

“All is exposed now,” he said.

“Parents and Priests and the Archdiocese now have choices. Will a priest enter a school with a Rainbow flag flying? Will grad masses be said in schools in June or will parents and students be told why the mass cannot be said in the school? Will priests ever enter an OCSB school?” the dad added.

Two other Catholic boards also voted last night to fly the Pride flag. The Durham Catholic District School Board and the Niagara Catholic School Board will now join the Catholic school boards of Toronto, Waterloo, Wellington, and Thunder Bay in flying the flag at schools within the board. Trustees at Halton Catholic District School Board decided in April not to fly the gay Pride flag but to provide schools staff with “mandatory training” about LGBT students and to compel schools to “raise awareness around Pride month.”