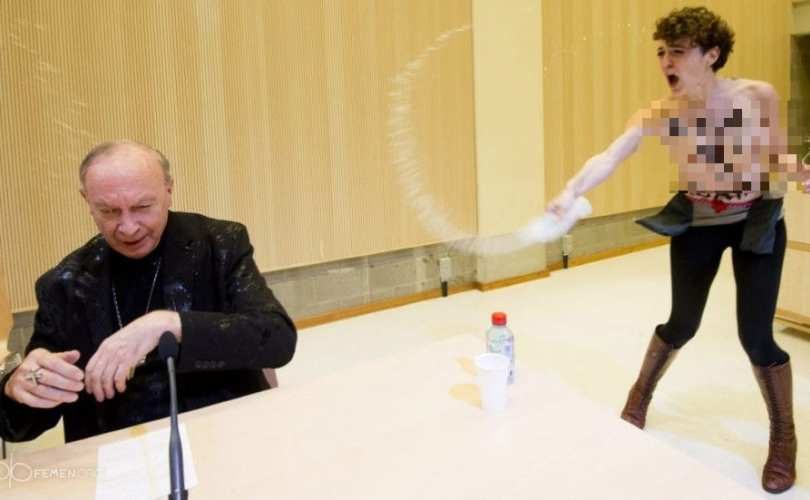 BRUSSELS, April 23, 2013 (LifeSiteNews.com) – In an astonishing display of gentleness in the face of a vile attack, the head of the Catholic Church in Belgium, Archbishop Andre-Joseph Leonard, remained calmly seated with eyes closed in prayer Tuesday as four topless women attacked him with shouts and curses and doused him with water.

It’s not the first time the bishop has been attacked for standing up for the Church’s teachings on homosexuality and expressing his concern for those who live the homosexual lifestyle.

The incident took place at the ULB University in Brussels where the archbishop was participating in a debate on blasphemy laws.

The four women, representing the pro-abortion and homosexual group FEMEN, took to the stage where they disrobed to reveal black-painted slogans on their bare chests and backs, such as ‘my body my rules,’ and 'anus dei is coming.' They also held signs reading ‘stop homophobia’. The women doused the archbishop with water from bottles formed in the image of the Virgin Mary.

For most of the attack, which lasted a number of minutes before the women could be forced off stage, Archbishop Leonard sat drenched with water with eyes closed in prayer.  After the ordeal, the archbishop kissed the image of the Virgin Mary on one of the water bottles that was used in the attack. Le Soir reports that one of the interveners said of the archbishop: “He was very calm and maintained a position of prayer. I have to believe he was praying for us.”

According to FEMEN, Tuesday’s attack was spurred by an interview three weeks ago where Archbishop Leonard said that when speaking to Christians who are inclined to homosexuality he suggests celibacy, as is required for all single persons.

Already in 2007, as Bishop of Namur, Archbishop Leonard was accused of an offence against the Belgian anti-racism act for calling homosexual acts “abnormal”.  In 2008 he was cleared of homophobia charges after appearing in court.

In 2010, as the new archbishop of Brussels, the archbishop was targeted by homosexualist groups, and condemned by the country’s prime minister, after he said that AIDS is a consequence of risky sexual behavior, including homosexual sexual activity.

Archbishop Leonard has been a great supporter for the pro-life movement in Belgium, speaking at their inaugural March for Life in 2010.