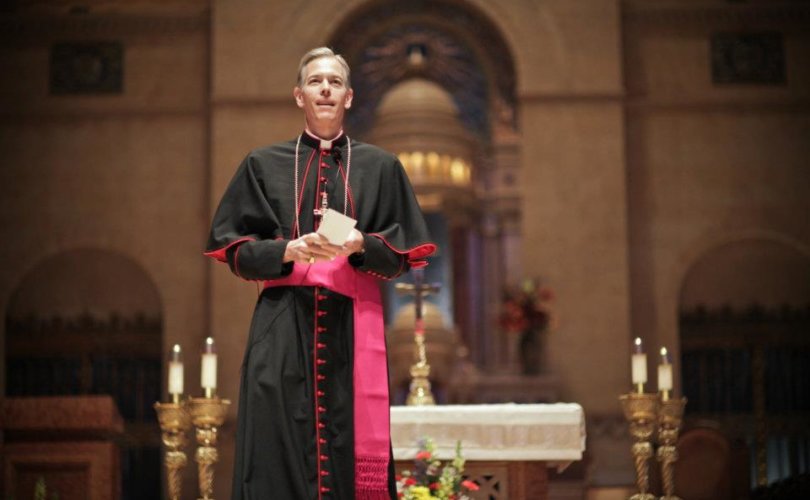 PORTLAND, Oregon, October 11, 2016 (LifeSiteNews)—Portland Archbishop Alexander Sample has issued a pastoral letter to clarify “troublesome misuses” of Amoris Laetitia that he says “do not correspond with the Church’s teaching tradition.”

In his pastoral letter A Living and True Icon, Sample began by reminding the faithful that Catholic doctrine may not change and the development of doctrine “admits of no essential change, no variation in the essential shape and limits.”

“All genuine [doctrinal] development exists in continuity with the past, both in the sense of following logically or organically from what was prior, but also in the sense of preserving the past, maintaining and securing what has been believed,” Sample wrote, noting that the Church’s teaching can “only develop in continuity, never in rupture.”

Although “pastoral practice and sacramental discipline develop as well…practice and discipline must be completely consistent with the teachings of Jesus and the Church,” Sample wrote.

“The indissolubility of marriage is a precious and essential teaching of the Church, revealed by Jesus and cherished in our unbroken Tradition,” he continued.

Sample listed three errant interpretations of Amoris Laetitia that he labeled “illicit” and “incompatible with genuine doctrine, pastoral practice, and sacramental discipline.” He dismantled these interpretations using quotes from Sacred Scripture, the Second Vatican Council, the Catechism of the Catholic Church, magisterial documents, and Amoris Laetitia itself.

The first misuse Sample listed is the notion that “Conscience legitimizes actions contravening divine commandments.” Amoris Laetitia “does not support the claim that conscience supersedes an objective moral law,” he wrote. This is because “conscience can err, and ‘freedom of conscience is never freedom ‘from’ the truth but always and only freedom ‘in’ the truth,’” Sample explained, citing Pope St. John Paul II.

“Encouraging or silently accepting an erroneous judgment of conscience is neither mercy nor charity,” wrote Sample. “Proclaiming the Good News, including the moral demands entailed by the nature of marriage, is a work of mercy, and all parents, schools, Catholic institutions, teachers, theologians, pastors, religious, and bishops have ‘the ‘grave obligation’ to be personally vigilant that the ‘sound doctrine’ (1 Tim 1:10) of faith and morals is taught’ for the proper formation of conscience.”

The second misuse, according to Sample, is the idea that “Under certain conditions divine prohibitions admit of exceptions.”

Numerous “progressive” prelates have essentially made this claim. Cardinal Walter Kasper, one of the chief proponents of dramatically liberalizing the Church’s sacramental practice, said, “There are openings there, clearly,” for Holy Communion for the divorced and remarried.

Chicago Archbishop Blase Cupich, who Pope Francis recently announced is to be appointed a cardinal, called Amoria Laetitia a “game-changer.” He has also said same-sex couples can receive Holy Communion in accordance with their “consciences.” This led a fellow bishop to publicly correct him.

“Some have improperly used” considerations about mitigating factors that can lessen a person’s moral culpability for certain sins “to claim that absolute prohibitions admit of exceptions, particularly when weakness of will or the complexity of a situation makes living up to the rule extremely difficult. This is incorrect,” Sample clarified. “It remains the case that certain actions are absolutely prohibited, for in no instance is it possible to choose them with a good will….There are negative commandments, or prohibitions… which are universally binding in each and every circumstance. They admit of no exceptions whatsoever and can never be chosen, in any way or for any reason, in ‘conformity with the dignity of the person’ or with the ‘goodness of the will.’”

“Doing good…admits of more flexibility and context than avoiding evil, which is why the ‘Church has always taught that one may never choose kinds of behavior prohibited by the moral commandments expressed in negative form in the Old and New Testaments,” Sample wrote. “Jesus himself reaffirms that these prohibitions allow no exceptions: ‘If you wish to enter into life, keep the commandments.…You shall not murder, You shall not commit adultery.…’ That which is prohibited is prohibited for all, in every circumstance.”

The third misuse of Amoris Laetitia is the use of it to claim “human frailty exempts from divine command”—that following the commands of Jesus is too difficult.

“Some have misused the Exhortation’s rightful insistence on the logic of mercy to claim that objectively wrong acts can be accepted, even perhaps sanctified, if a person judges he or she cannot do differently,” wrote Sample. This “empties the cross of its power” and misapplies “mitigating factors for subjective responsibility with determinations of objective rightness.”

“Claiming that individuals cannot change their ways is tantamount to denying the efficacy and power of grace, of denying that God can do what he promises,” the archbishop wrote.

The interpretation of Amoris Laetitia as suggesting the Gospel is too hard to follow is one of many “heretical” interpretations a group of 45 theologians asked the College of Cardinals to implore Pope Francis to correct.

“Misusing Amoris Laetitia to support the erroneous claims identified above does more than violate reason, the natural moral law, Scripture, the teaching of our Lord, and the unbroken teaching and Tradition of the Church—it also forgoes the Gospel,” Sample concluded. He said the Church offers sinners the same mercy Jesus offered to the woman caught in adultery—and the command to go and sin no more.

“What Jesus commands her to do is possible. It is a command to turn away from a life of sin and to live in a way that honors the mercy he has extended to her,” Sample explained. “Mercy opens the door to truth, and the truth of a new life in Christ will set her free. In emulating Jesus, the Church strives to offer the same mercy, the same truth, and the same hope to all.”

Sample told his diocese that he would release guidelines about the implementation of Amoris Laetitia. Several other U.S. dioceses already have. Their interpretations have been varied. A survey conducted by the U.S. bishops’ conference found “significant energy and interest” in the exhortation and recommended the “development of [diocesan] resources” on “irregular marital relationships.”