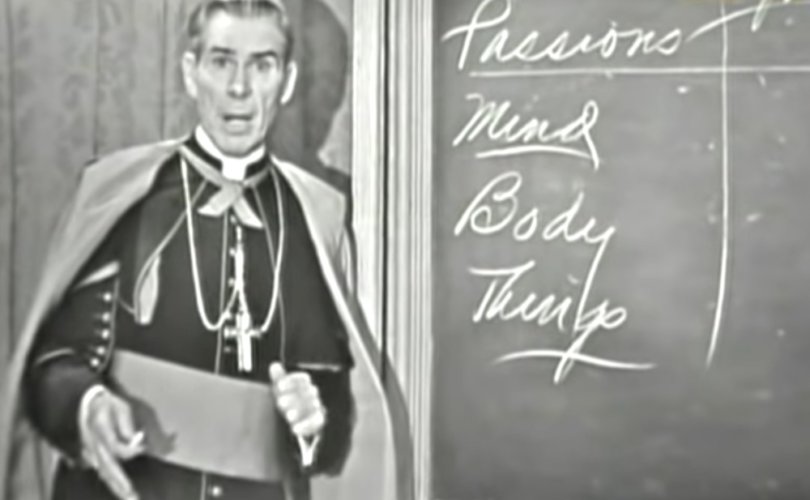 PEORIA, Illinois, December 6, 2019 (LifeSiteNews) — As controversy continues to swirl over the Vatican’s decision to postpone the beatification of the Venerable Fulton Sheen, archival video has surfaced showing the famed televangelist condemning “false compassion” for drug addiction, crime, and homosexuality, among other social ills.

It is the “social slobberers,” said Sheen, who “insist on compassion to the mugger, the dope fiend, the throat-slashers, to the beatniks, to prostitutes, to homosexuals, to the punks, so that today the decent man is practically off the reservation.” He reiterated, “This is a false compassion.”

A former professor of theology, the archbishop identified the origins of false compassion. “It started in literature,” he said. It was in the work of William Saroyan and John Steinbeck, for example, “where pity was extended through their novels to the good-natured slob.” It is in such novels that pity is shown, he said, “to every kind of pervert and degenerate.”

Sheen said false compassion leads to increased crime. Judges are not immune to false compassion: “Clemency of a false kind is shown to criminals,” he said. On a blackboard, Sheen provided crime statistics for New York City and the United States and added, “Part of the blame for this crime picture has to be laid at the door of all of those who committed and have shown false compassion.”

Sheen’s integrity in the face of clerical opponents

Sheen had the most popular show on American television in the 1950s and early ‘60s and became one of the most notable clergymen of the age. Besides his duties as auxiliary bishop of New York, he served as director of the Society for the Propagation of the Faith. When Cardinal Francis Spellman of New York demanded that the Society pay millions of dollars for dry milk that the U.S. government had donated for distribution to the poor of the world, Sheen refused.

According to author and EWTN news host Raymond Arroyo, in a preface to a re-edition of Sheen’s autobiography, Sheen felt an obligation to protect the money, “even from the itchy fingers of his own Cardinal.” When Pope Pius XII sided with Sheen in the dispute, Spellman reputedly told Sheen that he would have revenge.

Sheen subsequently found himself unwelcome in New York City parishes, and Spellman cancelled Sheen’s annual Good Friday homilies at St. Patrick Cathedral. He left behind his wildly popular “Life is Worth Living” television program at the height of its popularity. Finally, in 1966, Spellman had Sheen reassigned as bishop of Rochester. Sheen died in 1979, a few scant months after the visiting Pope John Paul II embraced him publicly at St. Patrick Cathedral, praising him.

Arroyo said on his Dec. 5 program that Spellman was motivated by “ego and envy” in sundering Sheen’s career. “Sheen’s integrity,” Arroyo said, “cost him a lot.”

“Even in death,” Arroyo said, “Sheen is still being victimized for his good works.”

As for any accusation against Sheen over the handling of an accused sex abusing priest, Arroyo said Sheen refused to return the accused priest to ministry, which is what many bishops since then have not done. On his program, Arroyo said Cardinals Timothy Dolan of New York and Blase Cupich of Chicago decided to push the postponement until the New York investigation into clerical sexual abuse is completed.

Rumors have long circulated that Spellman had multiple homosexual liaisons during his adult life. Authors Michaelangelo Signorile and Curt Gentry both claim that the FBI has extensive files on Spellman’s alleged liaisons. Documentary proof has not yet emerged. Arroyo suggested that jealousy on Spellman’s part drove him to bring Sheen down.

At the liberal National Catholic Reporter, Michael Sean Winters wrote disparagingly about the process of canonizing St. Pope John Paul II while also questioning whether Sheen should be beatified at all.

Sheen not implicated in abuse

Until the Vatican announcement on Monday, the beatification of the renowned televangelist, who captivated millions with his defense of basic morality and civil rights, had been scheduled for December 21 in Peoria, Illinois.

“The history of the cause is not one of counsel and collaboration,” wrote Rev. Raymond J. de Souza, who edits Convivium, a Catholic publication of Canada. This suggested to some commentators that Bishop Daniel Jenky of the Diocese of Peoria may have been too hasty in forwarding the process.

Once the Vatican announced the postponement, it was revealed that Bishop Salvatore Matano of Rochester, N.Y  had requested the delay just days before the planned beatification ceremonies were to take place at the cathedral in Peoria, where Sheen was ordained to the priesthood. Sheen served as bishop of Rochester in the 1960s for three years. Reportedly, Matano believed that the beatification process had been rushed, according to de Souza. De Souza said Matano had concerns over the ongoing probe by the office of New York Attorney General into earlier bishops and their dealings with priests accused of sexual abuse.

Sheen, however, has not been implicated, following investigations by the Vatican and the Peoria diocese.

“Archbishop Sheen’s record may be clear according to the church process, but what about the potential for a blindsiding hit from the New York attorney general?” De Souza wrote.

However, De Souza said that despite the “embarrassing postponement,” the effort toward the beatification and eventual canonization of the beloved archbishop will be successful.

Monsignor James Kruse of the Peoria diocese spoke out after a Catholic News Agency report said he had suggested that Sheen had not acted appropriately regarding Fr. Gerald Guli, a priest who had been accused of sexual misconduct in the 1950s before Sheen’s arrival in the Rochester Diocese. Msgr. Kruse said the Rochester Diocese had reported that allegation to the Peoria Diocese and the Vatican, which then cleared Sheen’s good name.“ Sheen in no way acted inappropriately,” Kruse told the Peoria Journal Star.

The postponement added new drama to the process of recognizing Sheen’s saintliness that began years ago when Archdiocese of New York fought the Peoria Diocese to keep Sheen’s mortal remains. Having the remains in his home diocese is a necessary step in Sheen’s beatification. It was only after a court order that Sheen’s remains were moved to Peoria in July. Last month, the Peoria diocese released the news that the beatification date had been set for December 21.