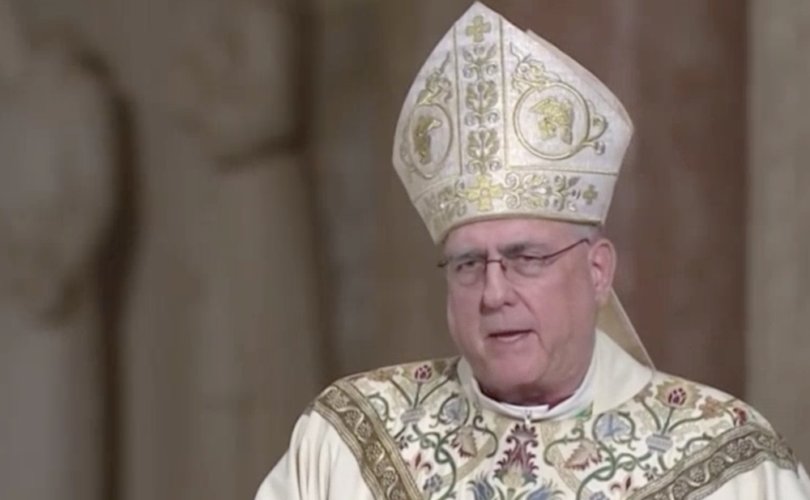 Explaining the reasoning for standing by one of his priests who declined admittance to an archdiocesan school for the child of a non-Catholic same-sex couple, Naumann said that real happiness is found in embracing God’s will for us, and this includes His plan for marriage and sexuality.

“We know the path to authentic happiness and abiding joy is to do the will of God and live a virtuous life,” he said in a recent column. “This is why the Church must proclaim moral truths with clarity and love.”

Naumann wrote in the March 15 edition of the archdiocesan newspaper The Leaven that parochial schools exist to help Catholic parents form their children in the Catholic faith, and that the witness and examples of adults are the most powerful influence on a child’s moral formation.

Further, he said, “In a culture that celebrates same-sex marriage as cultural progress and encourages gays to be proud of their lifestyle, our Church needs to uphold moral truth.”

Naumann and archdiocesan schools Superintendent Kathy O'Hara were petitioned in protest by some area Catholics recently after Father Craig Maxim, pastor of St. Ann Catholic Church in Prairie Village, Kansas, had to written parents, faculty, and staff, letting them know of the decision to decline enrollment of the kindergarten-age child. Maxim had consulted with the archdiocese and received its support.

The controversy has made local and national news.

The latest media reports had a petition protesting the decision at approximately 2,000 signers.

A petition from American TFP in support of St. Ann School and the decision to uphold Church teaching had more than 20,000 signatures by press time, surpassing its third goal.

Similar to the original response from the archdiocese in the matter, Naumann, the U.S. Bishops' pro-life chairman, effectively articulated Church teaching on marriage and sexuality in his column.

He said he believed most of those who were protesting the decision were well intentioned, and that he shared their concern for the child and the same-sex couple.

Naumann stressed that experiencing same-sex attraction is not sinful and wrote that, “It is offensive to God to make cruel, demeaning remarks about those made in his image, about those for whom Jesus gave his life on Calvary.”

He noted the importance of human dignity established through man’s creation in the image of God and the fact that God gave human beings the freedom to choose to do his will or not.

Chastity and the meaning, purpose of sexuality

Naumann then said, “The primary purpose of our parochial schools is to help Catholic parents form their children in the faith,” and that archdiocesan schools assist parents in helping their children discover their God-given dignity.

“An important part of this spiritual formation is helping our students develop the virtues necessary to live a moral life,” he wrote. “Part of this virtue formation includes cultivating chastity, helping our students understand the meaning and purpose of their sexuality. Our students are also taught the nature of marriage as a call to heroic, faithful, fruitful and forever love which serves as the foundation of the family.”

While the unique, permanent bond of marriage, which is between one man and one woman and open to life, is the ideal and provides the most benefit for children, he recognized that many children grow up other circumstances. He himself was raised in a single-parent home.

These children face additional challenges and need additional love and support, the archbishop wrote, and “Catholic schools strive provide assistance in many instances when parents in less than ideal circumstances are striving to raise healthy and holy children.”

All parents are required to commit as best they can to model at home the moral formation their children receive in parochial schools, he said.

Serious consequences from choosing to rebel against God’s plan

Naumann then moved on to the subject of sexual sin, listing each, and stating, “There are many ways in which we can rebel against the design of our human bodies.”

“Whenever we rebel against God’s plan and design,” he said, “there are always serious and inevitable negative consequences resulting from our choices.”

The various sexual sins have always been in existence, he continued, but now “virtues such as purity, modesty and chastity are subject to ridicule by the secular culture.”

Marriage is now whatever we want it to be

Archbishop Naumann pointed out that today, “There is strong cultural support to choose to deny such a fundamental reality as the nature of marriage.”

“Our cultural morals are no longer based on reason and understanding the innate purpose of an institution as fundamental as marriage,” he said, “rather, marriage is now whatever we want it to be, declare it to be.”

To the question raised of why the same standard is not applied to other school parents not living in accord with Church teaching, he said were it possible to know of such circumstances, the pastors would normally address the matter, to encourage the couple to come into conformity with Church teaching.

Other non-marital situations do not present the same confusion as same-sex couples, the archbishop explained, “because their invalid marriage does not contradict a fundamental component of the nature of marriage.”

Marriage is a public commitment, Naumann pointed out, and homosexuals had pushed for same-sex “marriage” because they wanted societal recognition, choosing to publicly try to redefine marriage.

“Similarly, marriage by its nature gives a couple a right to sexual intimacy,” he said, “Once again, the decision of the same-sex couple to enter into marriage publicly contradicts Catholic moral teaching on the sinfulness of homosexual acts and is part of an effort to normalize immoral actions.”

“Frankly,” he added, “I fail to see how admitting a child of same-sex parents to one of our schools is merciful or helpful to the child.”

Remarking on a gay activist that recently complained of efforts by another diocese to negotiate in such situations while still requiring affirmation of Church teaching, the archbishop said the Church must uphold moral truth.

Sin must be known and freely chosen, he continued, and moral confusion today could well impact culpability.

“Nevertheless,” said Naumann, “there are real life and death consequences when we use our bodies in a manner for which they were not designed. There is a reason that the life expectancy of gay men is much shorter than for heterosexual men.”

The path to authentic happiness and abiding joy

“We know the path to authentic happiness and abiding joy is to do the will of God and live a virtuous life,” he stated. “This is why the church must proclaim moral truths with clarity and love.”

The archbishop concluded by encouraging those struggling with same-sex attraction to reach out for assistance to the local chapter of the Church’s Courage apostolate, which advocates chastity for same-sex attracted Catholics.