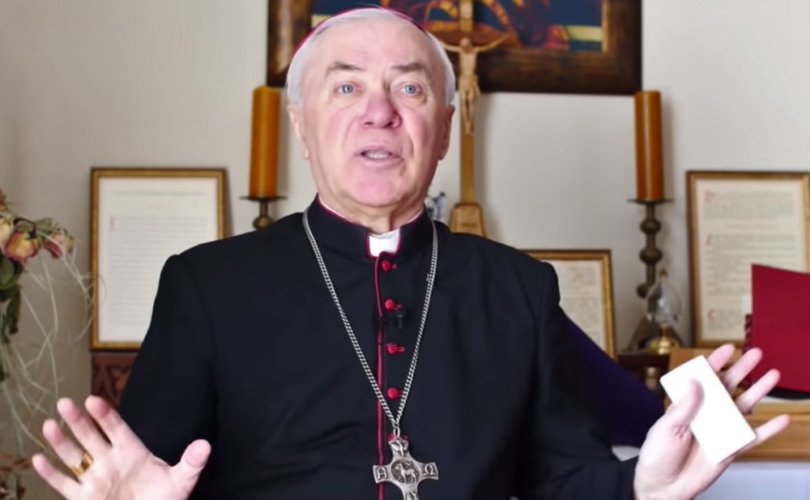 POLAND, June 25, 2020 (LifeSiteNews) – A retired Polish archbishop warned his brother bishops and fellow priests that they’ll “end up in hell” for forcing the faithful to receive Holy Communion only in the hand in response to the coronavirus pandemic.

Archbishop Jan Pawel Lenga did not mince words as he accused priests who insist on offering communion only in the hand as being ignorant of history and lacking in respect toward the Blessed Sacrament.  He made the comments in a March 21 video interview conducted during the early days of the Catholic Church’s response to the pandemic.

Such priests do not respect that which is Sacred and force others to violate their consciences, said the Archbishop in an interview for wRealu24 Polish Internet TV.

“Poland is still zealous in the faith, and Polish people do not want to take Communion in the hand and standing up, like in the degenerate western world,” said Lenga.  “The coronavirus is being used to break people’s consciences.”

Lenga issued a stern warning to those bishops and priests who insist on administering the Eucharist solely in the hand:  “I am calling on them to stop, or they’ll end up in hell for doing this.”

Earlier this week, Catholic commentator John-Henry Westen, co-founder and editor-in-chief of LifeSiteNews, detailed five reasons why Catholics should only receive Holy Communion on the tongue.

“With orders to refuse the faithful Holy Communion on the tongue coming from governmental health authorities and even some bishops, I wanted to give you the reasons why I could never receive Holy Communion in the hand. And, if the matter was forced, I would make the sacrifice of just making a spiritual Holy Communion,” he said.

After giving the five reasons, Westen made it clear that it was his belief that “Catholics should not receive Holy Communion in the hand.”

“Should you be in a situation where you are refused Holy Communion unless you take it in the hand, I would make a spiritual Communion only and then contact the proper authority to remedy the situation,” he said.

Lenga foresees that when the pandemic is over, clergy will say people are now accustomed to taking communion in the hand while standing and so the practice should be continued.

They got used to not going to Confession?  Great!  Easier for us.

We will be no different than the Protestants, in Germany and elsewhere in the world.  That’s where this evil is leading to.

Lenga went on to suggest that Church leaders had abandoned the faithful during a time of need.

“Where are the bishops? Where are the Cardinals?” he wondered.  “Where are all the Church hierarchy, usually so self-confident and important?”

“They are hidden away, having left the people alone,” he said.

“The bishops closed down all churches, no Masses are available,” he lamented.  “This says a lot about bishops and priests who have separated themselves from the faithful, as if they didn’t exist.”

Lenga compared bishops and priests who are missing in action to the doctors and nurses working on the front lines to combat the virus, risking their own health and sometimes even their lives.

“The priests ran away from all this.  They just want to live long,” said Lenga. “That shows they are far from the true faith, and far from God.”

Lenga said that these priests have lost the sense of the sacred and have become nothing more than “administrators.”  They tell others what to do but don’t really respect Christ as God.

“Don’t just mindlessly listen to the government and do whatever they say,” said Lenga.  “You are ready to deny Jesus and destroy everything.”

“There is a panicked fear of death everywhere, instead of the fear of Judgement Day, or God’s punishments, which will come!” declared the Archbishop.

“[Pope Francis] is hiding away in his palace,” said Lenga.  “The cardinals are hiding away.”

“What happened to Catholicism?” he asked.  “It’s a disaster.”

“Gentlemen, bend your knees,” he concluded.

Archbishop Lenga has frequently criticised Pope Francis and earlier this year was sanctioned for calling him a “usurper and heretic.”

According to the Polish journal Więź as reported by CNA, Lenga said “Bergoglio preaches untruth, preaches sin, and does not preach a tradition that lasted so many years, 2,000 years… He proclaims the truth of this world and this is the truth of the devil.”

As a result, the Diocese of Włocławek, where the archbishop lives in retirement, forbade Lenga from celebrating public Masses in February.  One commentator said at the time that Lenga had been “muzzled.”

Last year, Lenga joined Cardinal Raymond Burke and Bishop Athanasius Schneider in issuing a public declaration of 40 truths of the faith to remedy the “almost universal doctrinal confusion and disorientation” endangering the spiritual health and eternal salvation of souls in the Church today.

Titled “Declaration of the truths relating to some of the most common errors in the life of the Church of our time,” the declaration sought to uphold the Church’s perennial teaching on the Eucharist, marriage and priestly celibacy.

Some of the points implicitly referenced statements made by Pope Francis, while others related to points of confusion that had arisen or intensified during the current pontificate. Still, others addressed moral errors in society that are gravely harming lives, as much of the hierarchy stands by.

Lenga’s recent message to the priests and prelates of Poland echo last year’s Declaration, which argued that the faithful feel “abandoned,” and, perhaps presciently, that the Church is experiencing one of the “greatest spiritual epidemics” in her history.