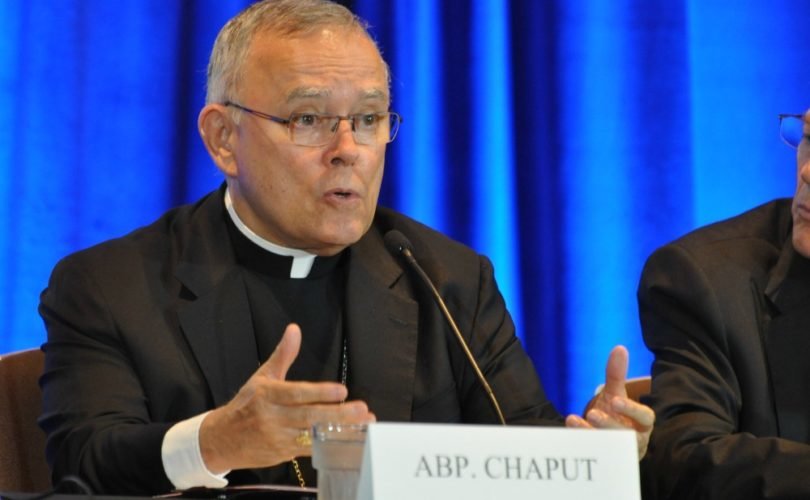 PHILADELPHIA, April 20, 2018 (LifeSiteNews) — An American archbishop has published a letter from “a young father” begging Church leadership for solid doctrine and beautiful liturgies.

The writer was concerned about the upcoming synod on “Young People, the Faith, and Vocational Discernment” and wanted to offer the archbishop his and his tradition-loving friends’ perspective.

The 26-year-old father of three told Chaput that he and his wife find discussions about a doctrinal “so-called paradigm shift” both “disturbing” and “disastrous” for the evangelization of the young and of fallen-away Catholics. He cited the popularity of Jordan Peterson as evidence that young people are longing for truthful teachers.

“We young people crave the truth and clarity of good teaching,” he wrote. “On a secular level this is evidenced by the meteoric rise in popularity of Jordan Peterson. We crave the truth, no matter how blunt or difficult it is for us to swallow or for the shepherds of our flock to teach.”

The young man described the propaganda that his generation has been “deluged with” from a very young age, including attacks on gender, virtue, chivalry, the family, the nature of sexuality, and the unborn. He said that the young need the Church’s help in learning the truth.

“We urgently need the Church’s clarity and authoritative guidance on issues like abortion, homosexuality, gender dysphoria, the indissolubility of matrimony, the four last things, and the consequences of contraception (moral, anthropological, and abortifacient),” the young father wrote.

“My generation has never, or rarely, heard these truths winsomely taught in the parishes,” he continued. “Instead, we hear most forcefully and frequently from our bishops’ conference and our dioceses regarding the federal budget, border policy, net neutrality, gun control, and the environment.”

The young man said his generation had noticed an “appeasement of modern culture under the broad cloak of pastoral sensitivity.” He cited “some high-profile clergy who deliberately blur the Church’s teaching regarding homosexuality and transgenderism in the name of ‘building bridges’.”

Other problems he listed included Pope Francis’ silence before the Dubia regarding Amoris Laetitia, the mockery of discussions of liturgical beauty and of reverent reception of the Eucharist, and – in the context of dropping Mass attendance – a dismissal of tradition-loving youngsters as “rigid.”

“This shift away from clarity is demoralizing for young faithful Catholics, particularly those with a heart for the New Evangelization and my friends raising children against an ever-stronger cultural tide,” the young man wrote.

He also warned that converts and returned Catholics are being scandalized by the new attitude of appeasement.

“Peers of mine who are converts or reverts have specifically cited teachings like Humanae Vitae, Familiaris Consortio, and Veritatis Splendor as beacons that set the Church and her wisdom apart from the world and other faiths,” he stated. “Now they’re hearing from some in the highest levels of the Church that these liberating teachings are unrealistic ideals, and that ‘conscience’ should be the arbiter of truth.”

The young writer also contrasted the beautiful Catholic aesthetic that nourished previous generations with the ugly liturgical surroundings his generation was raised in. He says that he and many of his peers want what their ancestors had.

“In sum, many of us feel that we’re the rightful heirs of thousands of years of rich teaching, tradition, art, architecture, and music,” he explained. ”We young Catholics increasingly recognize that these riches will be crucial for evangelizing our peers and passing on a thriving Church to our children. If the Church abandons her traditions of beauty and truth, she abandons us.”

He concluded by saying that he was not writing out of bitterness but out of love for  peers who have not been given what God has granted him and his friends. He also thanked pastors and bishops who are good role models for evangelization, preach truth and promote beauty.

Archbishop Chaput added only that the future of the Catholic faith “belongs to those who create it with their fidelity, their self-sacrifice, their commitment to bringing new life into the world and raising their children in truth, and their determination to walk Christ’s “narrow way” with joy. He prayed that God would give the 2018 Synod fathers “the grace and courage” to lead young people on that path.