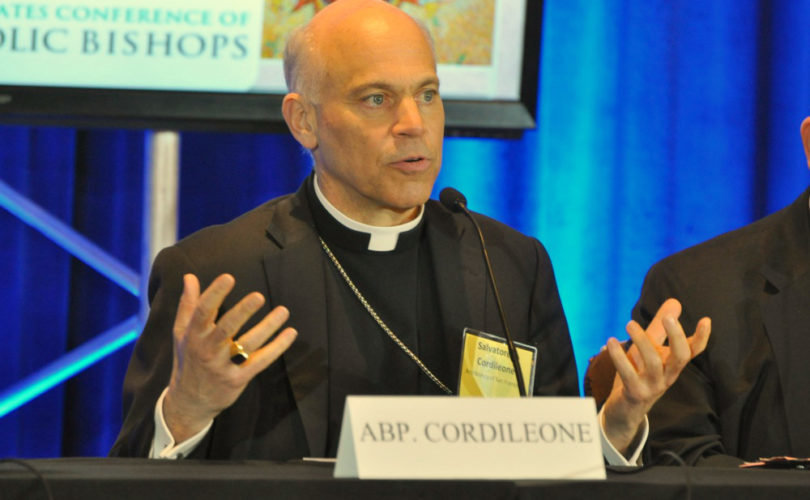 ST. LOUIS, MO, June 19, 2015 (LifeSiteNews) — If the US Supreme Court decides to redefine marriage in the next couple weeks it will not stop the nation’s bishops from proclaiming the truth, says the archbishop serving as point man on the issue.

“Regardless of what happens at the end of this month, nothing the court says can change what marriage truly is and we will continue to promote and defend it,” said San Francisco Archbishop Salvatore Cordileone, chairman for the USCCB Subcommittee for the Promotion and Defense of Marriage.

The archbishop quoted Russian novelist Aleksandr Solzhenitsyn to illustrate the point for his fellow bishops at their Spring Assembly earlier this month in St. Louis.

“Let the lie come into the world, let it even triumph. But not through me,” said Archbishop Cordileone. “The simple step of a courageous individual is not to take part in the lie.”

“We may have to suffer this lie about marriage in the law,” he continued, “but we must not participate in it or keep silent about it.”

He suggested to his fellow bishops that the faithful can offer up small hardships in this regard for the Christians in the Middle East and elsewhere who are being killed and exiled for the faith.

“Let the lie come into the world, let it even triumph. But not through me. The simple step of a courageous individual is not to take part in the lie.”

The archbishop knows something about taking heat for the Catholic faith, with the attacks on him over the last several months for working to strengthen the Church’s identity in San Francisco Catholic high schools. His fellow bishops applauded him fervently at the end of his presentation after USCCB President Louisville Archbishop Joseph Kurtz thanked him for his courageous leadership for the Church.

Marriage has been effectively redefined in 37 states and the District of Columbia as consequence of judicial action, Cordileone told the bishops, and a “yes” answer to either question before the high court – whether there is a constitutional right to same-sex “marriage,” and whether states have to recognize same-sex “marriages” performed in other states – will have the practical effect of redefining marriage nationwide.

Archbishop Cordileone warned of more persecution coming for those who believe in God’s plan for natural marriage should the Supreme Court decide to redefine marriage in the law.

“Those who continue to advocate for the true definition of marriage will be increasingly marginalized in law and society,” he said, “and depending on the rationale, could be erroneously viewed as proponents of discrimination and will themselves be targeted for discrimination.”

His department had already been providing material for the bishops and dioceses to educate on the issue, and also filed an amicus brief in the cases before the Supreme Court. More resources will be available on the implications of the court ruling once it is handed down.

“In this atmosphere we continue our efforts to protect the freedom of those who believe and act on the truth that marriage is the union of one man and one woman,” said Archbishop Cordileone.

Various recent legislative efforts were supported by the US bishops in defense of marriage, including reintroduction in both Houses of Congress of the State Marriage Defense Act and the Child Welfare Provider Inclusion Act, the latter which protects adoption and foster care providers against discrimination by the federal and state governments for placing children in homes with a mother and father.

The Marriage and Religious Freedom Act will be introduced again soon in the House and the Senate, he said, especially important with it providing protection in the areas of federal employment, contracts, grants, and tax-exempt status.

“The act is particularly relevant,” Archbishop Cordileone stated, “given that when the Solicitor General of the United States was recently asked by a justice of the Supreme Court at oral argument in the marriage cases whether a religious school could lose its tax exempt status for opposing same-sex ‘marriage,’ the Solicitor General did not take the opportunity to deny it, and thereby quell fear about it, but instead said that, ‘It’s certainly going to be an issue.’”

More is expected as well in terms of federal classification of sexual orientation or gender identity. “These categories have come to acquire meanings in law that both reflect an incorrect understanding of the human person and protect immoral behavior,” said Archbishop Cordileone, calling out the Obama administration for promoting them.

“Regarding the federal executive branch,” he said, “we have continued to witness efforts to advance what Pope Francis has referred to critically as ‘gender theory’ or ‘gender ideology.’”

The recent OSHA-released dictates compelling employers to allow self-identified transgendered individuals to use the bathroom according to their “gender identity” and not their biological sex, were a perfect example of the Holy Father’s insight on the subject.

“There is the mistake of the human mind – gender theory – creating so much confusion,” the archbishop said, quoting Pope Francis, “and it seeks to cancel out sexual difference.”

“The importance of responding to this challenge with truth and compassion remains paramount,” he said, and shared that the Holy Father has been offering excellent catechesis on marriage in his series on the family during his Wednesday general audiences.

“An essential part of our teaching is and has to be that the difference between man and woman in a positive difference,” said the archbishop. “It’s the difference that makes new life possible, rather than a negative one to be ignored or actively opposed.”

He, along with a few other bishops had signed the Defense of Marriage and the Right of Religious declaration in April along with more than 30 other faith leaders, showing that the Catholic Church is not alone in its witness to marriage.