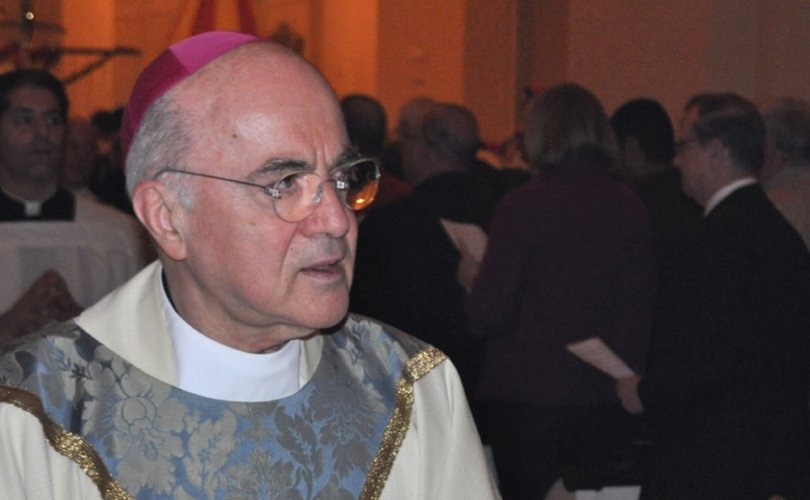 October 19, 2018 (LifeSiteNews) — Archbishop Carlo Maria Viganò ultimately spoke up about the culture of corruption, sexual dysfunction and abuse in the highest corners of the Catholic Church because he did not want his own soul to be damned to hell.

In his third bombshell testimony on his personal knowledge and experience of the hierarchy’s handling of accused serial sexual predator Archbishop Theodore McCarrick, the former apostolic nuncio to the United States responded to accusations that he had created confusion and division in the Church by coming forth.

But the confusion and division in the Church didn’t start with his August 2018 testimony, Viganò said, and has only been fed by Pope Francis’ failure to “confirm the brothers in the faith and in sound moral doctrine.”

“Therefore I spoke,” he said. “For it is the conspiracy of silence that has wrought and continues to wreak great harm in the Church — harm to so many innocent souls, to young priestly vocations, to the faithful at large.”

Viganò knew that blowing the whistle would disconcert clerics, and worse, cause pain for the laity.

“Yet I believe that my continued silence would put many souls at risk,” he said, “and would certainly damn my own.”

The archbishop illuminated clearly the thinking of a man considering his mortality and the disposition of his mortal soul related to being privy to the Church’s clerical sexual abuse scandal.

“To bear witness to corruption in the hierarchy of the Catholic Church was a painful decision for me, and remains so,” he wrote. “But I am an old man, one who knows he must soon give an accounting to the Judge for his actions and omissions, one who fears Him who can cast body and soul into hell. A Judge who, even in his infinite mercy, will render to every person salvation or damnation according to what he has deserved.”

There was no other option than to come forward, Viganò said.

“Anticipating the dreadful question from that Judge,” he wrote, “how could you, who had knowledge of the truth, keep silent in the midst of falsehood and depravity? — what answer could I give?”

As to why he didn’t report “the aberrant behavior of Theodore McCarrick” sooner, Viganò said in the third testimony released today that the seriousness of the matter necessitated earnest discernment, and for that delay he is repentant.

“I could have publicly denounced the truths of which I was aware earlier,” he said, “If I have some responsibility in this delay, I repent for that. This delay was due to the gravity of the decision I was going to take, and to the long travail of my conscience.”

Viganò first released testimony on August 25 that Francis and other high-level prelates knew of McCarrick’s serial sexual misconduct and covered for the prominent disgraced cardinal. He has been in hiding since.

Viganò issued another statement shortly thereafter in response to false charges he tried to quash an investigation into alleged misconduct by former Archbishop John Nienstedt of Minneapolis-St. Paul, saying they were part of an attempt to discredit him.

Later in September, Viganò released more testimony responding to Francis’ silence on the McCarrick cover-up. Francis had first stated he would not say “a word” about the charges leveled by Viganò, and then proceeded to talk cryptically again and again in his daily homilies about the “Great Accuser” who is dividing the Church.

In the second testimony released September 28, Viganò appealed to Cardinal Marc Ouellet, Prefect of the Congregation for Bishops, to bear witness to the truth and release key documents in regard to McCarrick.

Ouellet responded in an open letter dated October 7, telling Viganò his claims were political and extremely reprehensible. Consensus on the Ouellet response was that it in fact confirmed Viganò’s assertions.

In his third testimony, Viganò restated the key points of his initial testimony and listed the facts on which Ouellet concedes in his open letter back to Viganò. The former apostolic nuncio then went through, item by item, disproving the assertions in Ouellet’s letter.

He put his contentions before God, Viganò explained, and noted they have yet to be disproved.

“I invoked God as my witness to the truth of my claims,” he said, “and none has been shown false.”

Despite some of the public reproaches against him, Vigano said speaking up was not a case of settling scores or brooding over the “vicissitudes of ecclesiastical careers,” rather it’s about the salvation of souls.

“This is about souls,” Viganò continued. “Many souls have been and are even now imperiled of their eternal salvation.”

Appealing again to his brother bishops and priests who know the truth of his statements or who have access to relevant documents, he implored them to make the right choice and speak up, for the same reason he did.

“You too are faced with a choice,” Viganò said. “You can choose to withdraw from the battle, to prop up the conspiracy of silence and avert your eyes from the spreading of corruption.”

“You can make excuses, compromises and justification that put off the day of reckoning,” he continued. “You can console yourselves with the falsehood and the delusion that it will be easier to tell the truth tomorrow, and then the following day, and so on.”

“On the other hand, you can choose to speak,” said Viganò. You can trust Him who told us “the truth will set you free.”

Acknowledging that it will not be an easy decision, he said, “I urge you to consider which choice — on your deathbed, and then before the just Judge — you will not regret having made.”